There is nothing like the most powerful man in the world stirring the pot on Twitter with our most unstable adversary, with a veiled threat to our most capable frenemy to send investors scurrying for safe haven assets:

North Korea is looking for trouble. If China decides to help, that would be great. If not, we will solve the problem without them! U.S.A.

Who knows where China/US/North Korea goes from here but Treasury yields are down, meaning bonds are up, and Gold is having its best day in weeks, up nearly 1.5%. The etf that tracks the shiny metal, GLD, is trading at its highest level since the day following the election on November 9th, and above its 200 day moving average for the first time since: 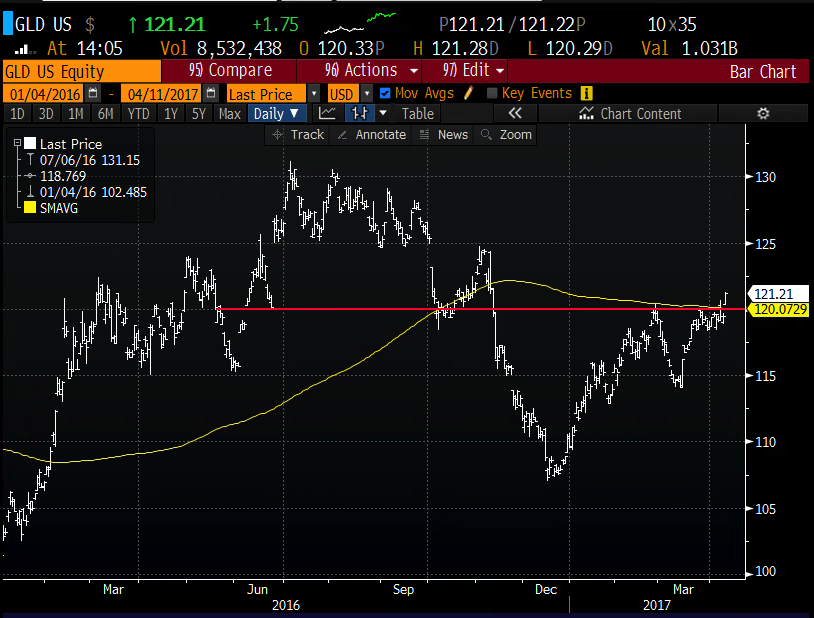 Understandably, call volume in the GLD is running hot, 2x that of puts, with nine of the top ten most active strikes being calls.

This is an example of committing more capital to the idea to buy some more time. What it also took advantage of was a pop in near term volatility, which allowed for a much better sale in April, and therefore a better roll to take the position out to May. May vol is quite low historically. And if GLD is able to breakout from here May vol will likely rise with the underlying, making a call roll a very nice alternative to owning the ETF as it would benefit from both deltas and implied vol while still being defined risk if GLD reversed the other way.