On Friday’s Options Action on CNBC the panel discussed Q1 bank earnings that kick off this Thursday with results from Citigroup (C), JP Morgan (JPM) and Wells Fargo (WFC). Friday on the site I detailed (read here) a near-term strategy using XLF options that could serve as a dollar cheap hedge for those who own bank stocks, or for those looking to make a defined risk bearish bet, watch here: 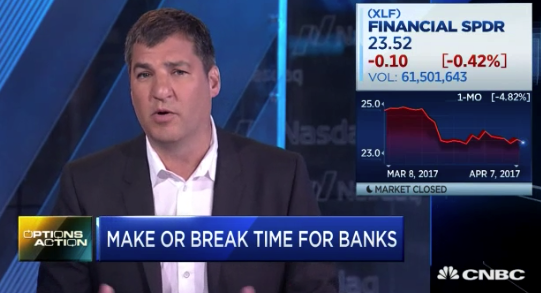 The implied week movement in the XLF off of a $23.52 close Friday is about 1.7% in either direction. The Apr 13th weekly straddle went out offered at 41 cents if you bought that and thus the implied move you would need a rally above $23.91, or a decline below $23.09 to make money.

Delta (DAL), before the open, the options marker is implying about a 3.5%one-dayy post-earnings move, which is rich to its 4 qtr average of nearly 2%, but well shy of its 10 year average one day post earnings move of 5%.  Shares of DAL are down 8% on the year, and down nearly 15% from its 52-week highs made in early December. The stock is now teetering on 1-year technical support at $45:

Thursday (all before the open):

Citigroup (C), the implied one day move is nearly 3%, which is basically in line with its long-term average, but very rich to its 60 basis point average over the last 4 quarters.

Our friend Peter Boockvar over at the Boock Report highlighted the questions he would like answered from bank ceo’s on their conference calls this week:

What is going on with this decline in bank lending across the board? For C&I loans to businesses, is there less demand because of the uncertainty over the timing of tax reform? Are companies tapping the capital markets instead of utilizing bank loans? Are companies just lessening their demand for credit because of already high leverage ratios? Are oil companies mostly responsible for the decline in C&I loans because they are paying back credit lines tapped last year? Are banks cutting back on mortgage warehouse lines because of the sharp contraction in refinancings? With respect to the decline in consumer credit lines, the questions are easier. Is it a demand side issue or are standards being tightened? What is the credit outlook for commercial real estate where activity and pricing seems to be topping out?

ICYMI! Markets are pricing in the lowest probability of a bear market since the financial crisis. https://t.co/8vrrRvnXbZ pic.twitter.com/JuEThoKOu7

Stores Are Closing at a Record Pace as Amazon Chews Up Retailers via @business https://t.co/LiVVlmEOYO pic.twitter.com/4h9F24mOnh