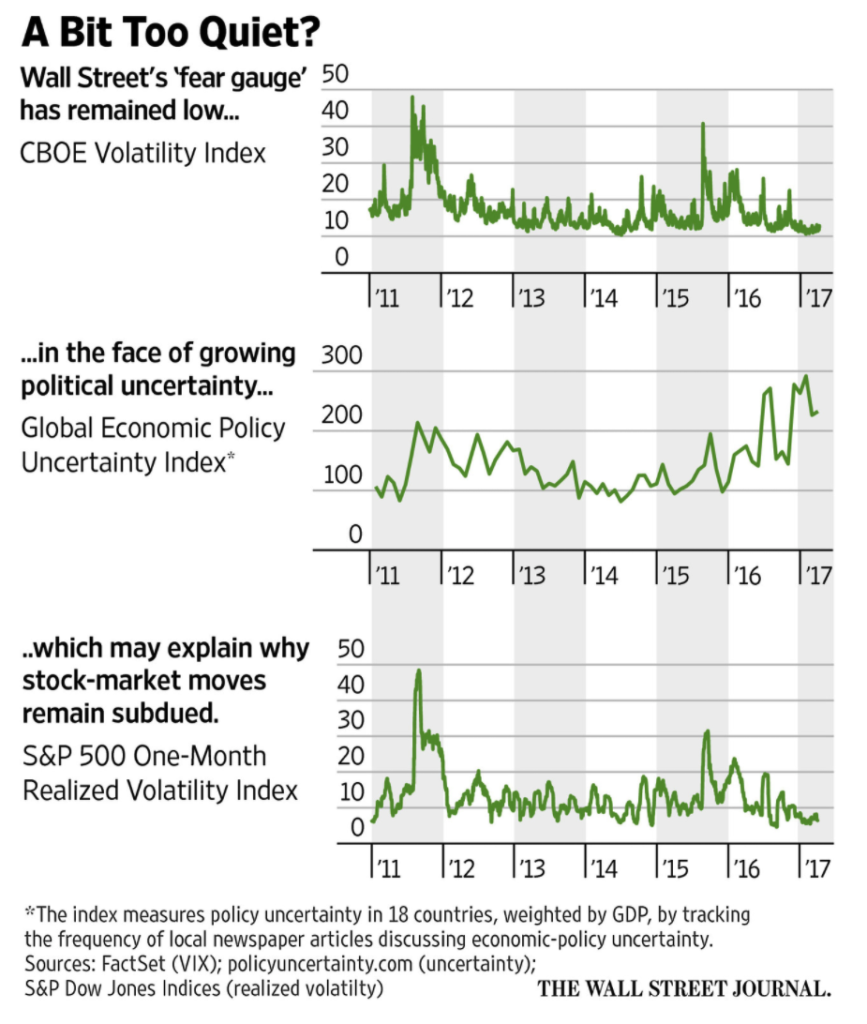 The theory, advanced by several money managers, bankers and analysts, describes a type of feedback loop in which calm markets make selling insurance against sharp swings in asset prices profitable, which makes the markets more calm, which then makes selling insurance yet more attractive. And on and on.

Behind the loop is a danger: If a giant shock—a big tornado—does materialize, the loop could suddenly run in the other direction, amplifying big moves rather than damping them.

The slump in volatility has forced big money managers to change their approach to insurance. They used to buy insurance in the form of options contracts to protect their portfolios against sharp moves. Now, they are selling it.

What’s being described here is that money managers are net sellers of vol (when they used to be buyers) and the derivatives desks at banks are net buyers from their clients (when they used to be sellers). This is actually the market getting smarter as it’s always wiser to be a net seller of option premium (consider this the passive investing of the options market). Here’s the effect that has on realized volatility from day to day:

Banks want to hedge those bets. The main way to do that is to buy assets the options are insuring whenever the market falls and sell those assets when it rises. If, say, a falling stock continues to fall, the bank will make money because its volatility insurance pays off. But those profits will be offset by money lost due to the decline in the stock’s price.

Likewise, if the falling stock quickly reverses course, the bank loses the premiums it paid for volatility insurance but wins on the stock itself.

The effect of that hedging, though, is to smooth out stock-price movements—to reduce the chances tornadoes will develop. The lessened likelihood of tornadoes makes selling the insurance more attractive, and so on.

In a nutshell, the theory is that derivatives desks at banks are more long gamma (net long options) than they prefer, or would be normally as they prefer to be short options. And because they want to stay delta neutral they buy the market when it drops, and sell it when it goes higher. Every day. That lessens the intra day and day to day moves in the market and makes selling vol even more attractive to the money managers, creating a feedback loop. This is no different than anytime vol is low as the market gets overloaded with gamma. What’s different this time, in theory, is that selling vol has become common among money managers that used to do the opposite.

It’s an interesting theory, and it’s worth watching. If human emotion is being removed from the market with passive investing and algo trading (MorningWord 3/16/17 – Do Algos Dream of Electric Crashes?) AND money managers (or their quant models) have finally figured out that you make more money selling insurance, than buying it, then maybe sustained periods of low volatility are the new norm. This is essentially computers being better at analyzing risk than humans. It’s possible that what we are witnessing is disrupting the historical status quo.

Speaking of humans, in the financial press, you routinely hear options peeps suggesting to buy protection when it is cheap, not when you need it. A point we routinely make on RiskReversal and CNBC. But this can be a very expensive proposition over time and result in a dramatic drag on performance in a market environment like the one we are in today. This should only be done tactically, while considering many factors. Steve Sears, who writes The Striking Price Column in Barron’s highlighted the problem with buying “cheap options” right now:

Are traders creating low-volatility loop in MKT? No. Actually, vol is not that low. Check HV to IV https://t.co/6lZRG4f90s via @WSJ

Just because implied volatility (the price of options) appears cheap relative to its history, that does not mean that the options are cheap relative to the market’s movement. That can be very costly and for those long gamma, their bands to scalp stock (to counter decay) get tighter and tighter out of desperation. I made this point yesterday in a post about SPY options (here): 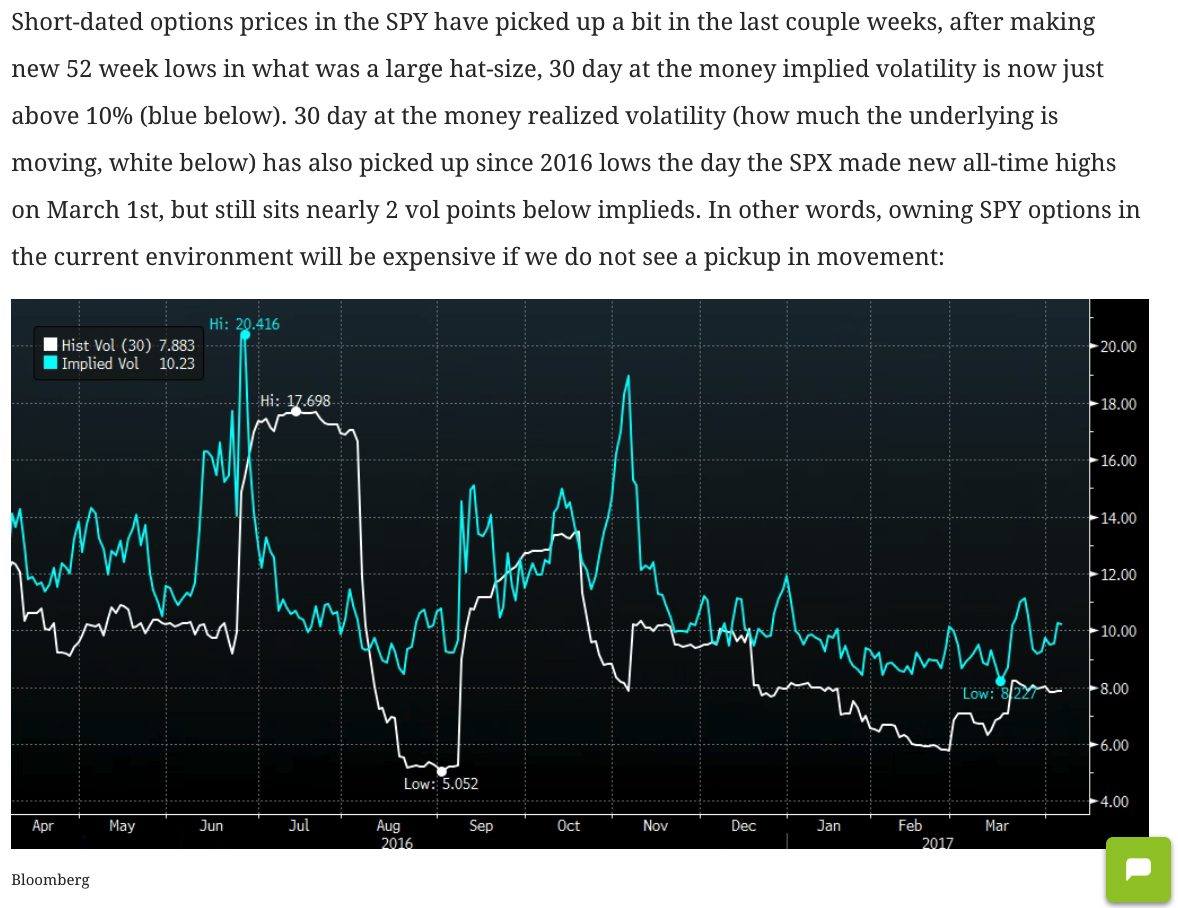 There are some very interesting currents running through markets right now. The low vol environment is certainly a result of some of these factors. And we’re clearly seeing a feedback loop as algorithms figure it out. What we haven’t seen yet is what happens in a recession, or a bear market. The WSJ article surmises that we could see the opposite play out, but that remains to be seen.