Here is a little pro-tip. Wall Street is quite specialized. Financial media often needs bodies to speak outside their area of expertise. Even me sometimes. In many cases that’s fine, there’s a lot of inter-connectivity, and most jobs on Wall Street at least require a cursory knowledge of other specialties. For instance most equity traders at least have a basic knowledge of how options work. But I can tell your from experience that for a lot, that knowledge of options is superficial and it likely costs them, and could cost you.

Most pundits know when they’re over their skis, and the good ones admit it. For you, what’s important is to recognize and be careful when someone is speaking outside their area of expertise (to cite one of my favorite Onion articles) simply because he owns a suit. One example you’ll see is “traders” pulled from their booths on the NYSE to offer views on the FOMC, Washington, and macro-economics. It’s an amazing backdrop for TV and Web Video, but these people are brokers (order takers), not traders, and they’re there, and of course wearing a suit. They’re experts at order flow (the very little they still see), but they’re tourists like you and me on the FOMC and Tax policy. That’s important to remember.

Occasionally we get to hear the opinion of people with huge money in the game talking policy. In those instances you should, of course, have your antennas up in case they’re simply talking their book… but in general, their expertise should be taken seriously (because they have a seat at the table, the big one, not the kiddie one). This morning on CNBC (from the Nasdaq 😉 Larry Fink, the guy who runs  the largest asset manager in the world, Blackrock, with over $5 trillion under management (wearing a very nice suit I might add) pointed out that markets would see “setbacks” if we do not get deregulation and tax reform. He also mentioned that despite our ebullient market since the election that the U.S. might have just printed the slowest Q1 growth among G7 nations. The most important takeaway for me, echoing a point I have made on numerous occasions (on CNBC) of late, is that Q2 guidance from corporate managements may not meet high expectations as uncertainty grows over the pace of “pro growth” policy implementation. And we will get a good sense for that in the coming weeks as we get into Q1 earnings seasons. Watch here: 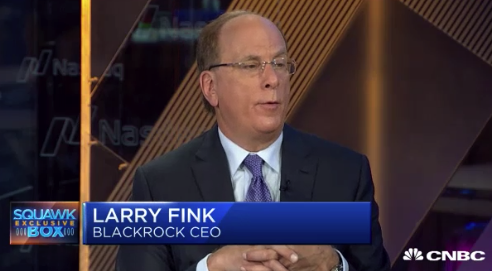 House Speaker Paul Ryan said on Wednesday that tax reform will take longer to accomplish than repealing and replacing Obamacare would, saying Congress and the White House were initially closer to an agreement on healthcare legislation than on tax policy.

That’s not very promising for agreement on tax cuts. And that was one of the many factors behind yesterday’s lost rally.

I’ll leave you with some thoughts from an actual expert that closely follows FOMC and DC policy and its effects on assets and markets. Here’s Peter Boockvar, this morning, “In a market that is priced for perfection, there is no room for policy mistakes”: 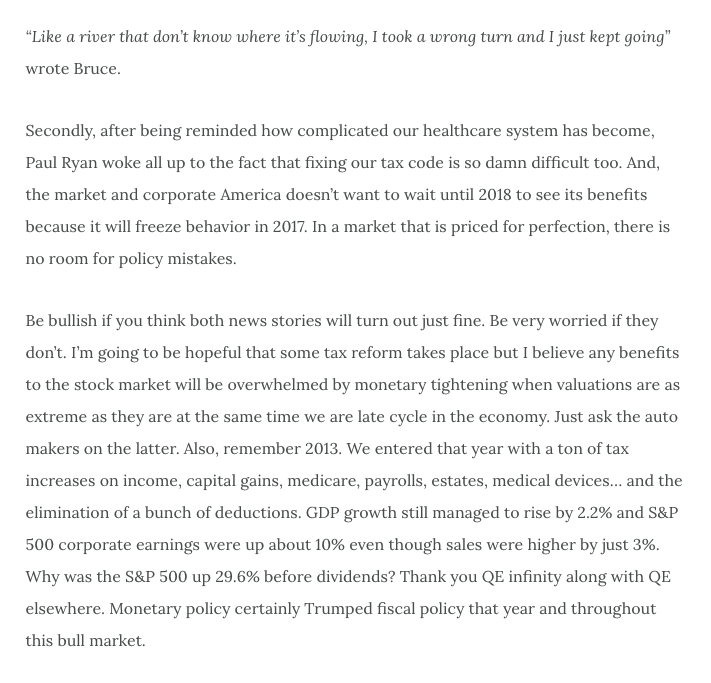 Add it all up, and I’d say Q1 corporate earnings better not disappoint, and forward guidance better be cautiously optimistic, or we very well might see a retracement of the post-election gains in cyclical sectors, and maybe more.