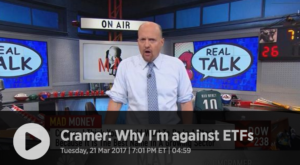 “At the end of the day, I’m against ETFs because they often create enormous distortions that can obliterate even the best of stocks,” Cramer said. “You have to accept a lot more risk if you own a stock that’s particularly hostage [to] a given ETF.”

The XLK (the SPDR Technology Select etf), a basket of nearly 75 stocks, has two, Apple (AAPL) and Microsoft (MSFT) that make up 25% of its weight. QQQ, the etf that tracks the Nasdaq 100, five stocks, of the 100 make up 40% of the weight (AAPL, MSFT, Google, Facebook and Amazon). That’s serious concentration in some of these sector etfs.

Jim’s point is more about how a “best of breed” stock can be weighed down by the lesser companies it shares an ETF.

And the flipside of that point is the potential drag a highly weighted under-performer can have on a sector etf itself. If a heavily weighted component is ugly, you can’t just dump it, and let the other stocks breathe. For example, look at IBB, the iShares Nasdaq Biotech etf. where the top four weighted stocks Celgene (CELG), Gilead (GILD), Biogen (BIIB) and Amgen (AMGN) make up 30% of the weight of the 100 stock etf. IBB, is up 11% on the year, with GILD the second largest holding down 5% on the year, and down 45% from its all-time highs made in mid 2015.  GILD might be one of the worst charts in the entire market.

While the IBB is up 11% on the year, and only down 25% from its all-time highs made in mid-2015, over the last year or so it has has been basing, stealthily making a series of higher lows and higher highs. And it’s held its long term uptrend from its 2012 lows (up 150% from those levels) and is threatening a breakout:

So we have a highly weighted stock in the index sucking ass, yet the index looking poised to breakout. It’d be nice if you could dump GILD and let the others break out.

The argument for etfs is they give you the exposure to a sector without the idiosyncratic risk of a single stock, even one as cheap as GILD, with a great balance sheet, management etc turning into a four-alarm fire. ETFs are useful for those looking to construct thematic portfolios, but don’t have the time and/or expertise to do the work on single stocks, and may not have the risk tolerance or skill set to know when to pull the plug on a single stock investment. But to Jim’s point, if you want to own AMGN and CELG but not GILD, buy AMGN and CELG, not IBB. And on the flip side, if we were playing would you rather (a favorite game on Fast Money) of buying GILD or IBB, without hesitation from current levels I would choose IBB.

Lastly, for you options peeps, options prices are far greater for single stocks than that of etfs, as etfs lack that idiosyncratic risk that a single stocks have. Particlualry gap risk, (like Lululemmon’s (LULU) 23% move yesterday).