In early February, prior to Chipotle Mexican Grill’s (CMG) Q4 earnings report we took a look at the beleaguered stock, offering the following admission: 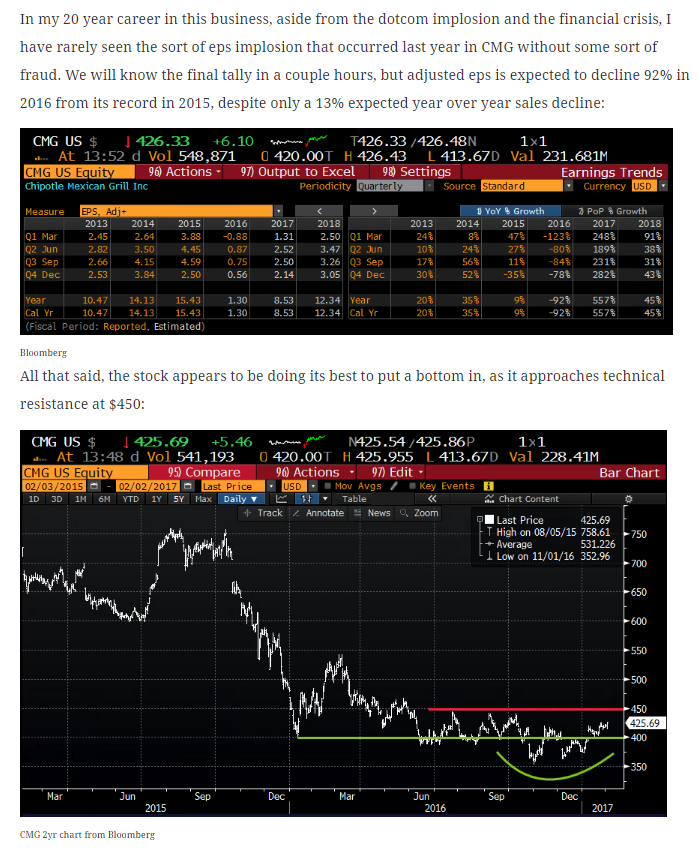 At the time the stock was at about the same spot it is now, despite its 4.5% one-day post-earnings decline. Since that decline it has made back the lost ground and once again looks poised to breakout:

Investors were initially disappointed with the slight miss on eps and sales, but per Bloomberg, there were signs of optimism:

January same-store sales jumped about 25 percent, compared with a 15 percent gain in December. Improvements to Chipotle’s mobile ordering system are aiding the recovery, executives said on a conference call. The company is now better able to predict when digital orders will be ready for customers.

The company also said it’s sticking with its “stretch goal” of hitting $10 a share in earnings this year.

As for that stretch goal, the street remains pessimistic, as consensus eps for 2017 is $8.08, despite expectations for record sales of $4.58 billion, a smidge above the all-time high made in 2015 as the food scare was bubbling up. By no means is the stock cheap on a P/E basis, trading 52x that $8.08 consensus, but if the company were able to get back to peak of just over $15 a share than you have a multiple more in line with Starbucks (SBUX), which investors might be able to stomach.

Lastly, the concentration of holders (the top 5 holders, including an activist, own about 45% of the shares outstanding) coupled with very poor investor sentiment (16.5% short interest and 9 buy ratings, 21 holds, and 5 sells with an average 12 month price target of $409, below where the stock is trading) sets up for a short squeeze on the slightest bit of unexpected good news, with the backdrop of an improving technical set up.

Breakeven on April expiration/Rationale: Mark to market gains the closer the stock is to 435 on April expiration and losses lower. The trade starts at about +10 deltas so we’re not talking massive losses or gains on small moves in the stock. The key is after April expires, we can then roll the short call to May, creating a cheap vertical call spread that captures earnings. The biggest risk to the position is a steady move lower into Arpil expiration where the May 435 calls become too far out of the money even with the event.