This morning I highlighted the break in trend in the S&P 500 (SPX): 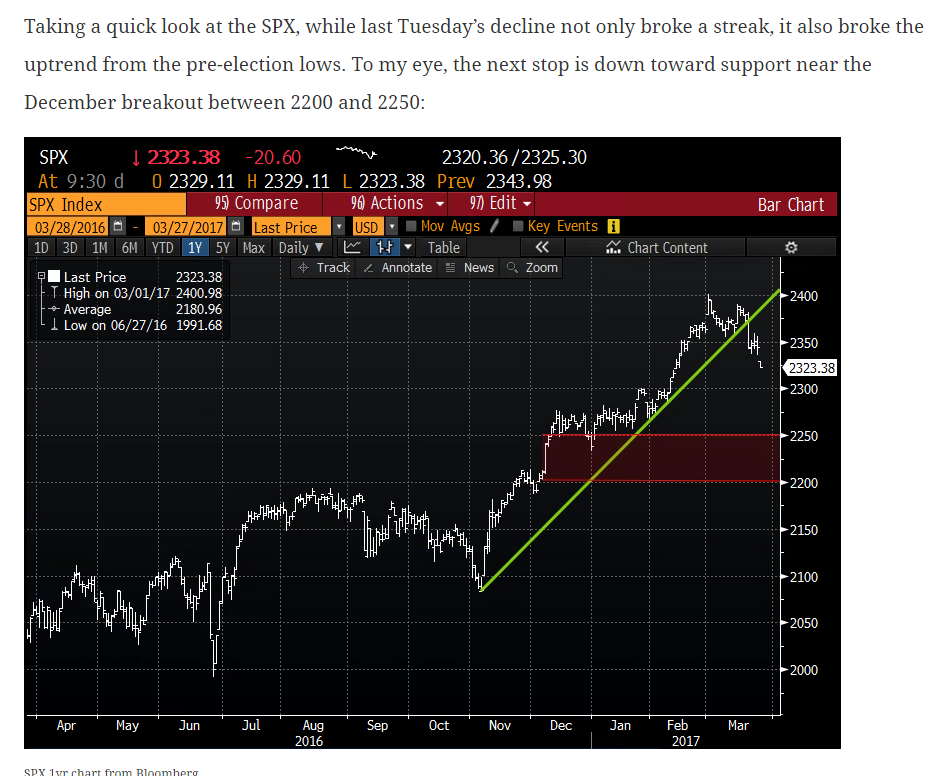 Two weeks ago Crude Oil broke its year-long uptrend, and is now down more than 10% on the year and nearly 14% from its 52-week highs made in Jan:

While the XLE, the energy select etf (which XOM, CVX & SLB make up 40% of weight) has been below its uptrend from its 2016 lows for weeks, and is also down about 14% from its 52-week highs made in Dec, Haliburton (HAL) is just today breaking its uptrend:

I guess there are a couple ways to look at the break in trend, but none of them positive. The trend line should serve as technical support. But while in the case of oil and related stocks, as they have come a long way to get back there, as bearish as the break is, it is a tough place to sell longs or initiate a new short position. As traders like to say, it’s a hard press.  But a bounce back and rejection at the trend, the prior support might serve as a great entry on a short, or at least serve as confirmation that longs are using bounces to lighten up.

In the not so distant past Hal was an acquirer of assets (tried to buy Baker Hughes in 2014 for $35 billion. It nearly doubled off its 2016 lows to its recent highs, and is now struggling with the nice round number of $50, longs should consider hedges or long stock alternatives that offer defined risk:

As far as positioning for further downside, like we said, it’s a hard press. But one way to define risk to a small amount is to use the recent weakness and pop in implied vol to sell a put that expires before the company’s scheduled earnings (April 24th) to buy the same strike put in June: