CNBC.com highlighted an interesting fact this morning about investor sentiment. The last time we had levels of optimism this high was in November 2000:

Investor sentiment jumped to a 16-year high in the first quarter, according to the latest Wells Fargo/Gallup Investor and Retirement Optimism Index.

The index, released Thursday, rose 30 points to hit 126 in the first quarter, according to a telephone survey of 1,007 U.S. investors from Feb. 10 to 19. That was just days after the Dow Jones industrial average topped the psychologically key 20,000 level.

The last time the optimism index was higher was during the tech bubble in November 2000, when the index was at 130.

That’s one of those headlines and ledes that get you all bearish and ready to short everything on the open. That is until you look at the chart farther down in the piece: 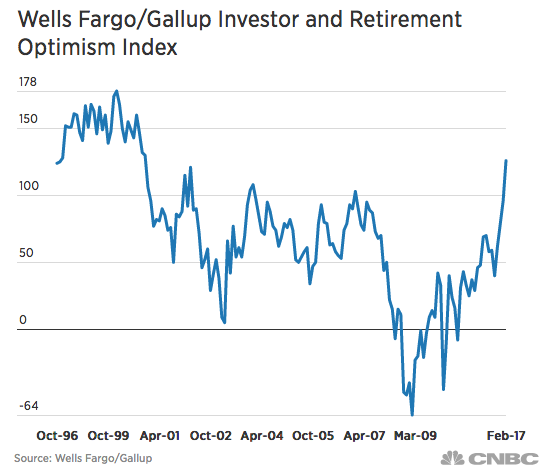 The index actually first hit this current level in at the end of ’96, beginning of ’97, it then spent the next 3 years above that level, ticking as high as 178 in January of 2000. The 130 reading in November 2000 referred to in the piece was nearly a year after the bubble started bursting and more than 3 and a half years after first reaching that level.

What I’m saying is on the way up in the late 90’s “investor” sentiment was actually correct. It was if the wisdom of the crowd saw the dotcom bubble coming. Of course we all know that it was terrible “investing” to have your retirement egg in Pets.com stock. But it was really good from a trading perspective to get all bulled up in January of 97. Here’s what happened in the SPX after sentiment hit 126 in the WFC/Gallup poll in January 1997 and then what happened after stocks topped out and crashed (chart starts on January 1st 1997, goes to Jan 1st 2004):

The stock market doubled after the sentiment reading hit this current level, topping out above 1500 a few years later. Of course, what happened next everyone saw coming. They just didn’t know how bad it would get, and eventually the sentiment reading got back to 0, right around the time the dotcom crash was ending in 2003. But even then, the SPX was higher than where it started at the beginning of the chart in 1997. The people that got roughed up were the ones that bought in 1999 and sold in 2003, and believe me, there were a lot of those people. But if you got hit in the head in 1996 and woke up in 2004 you’d have missed all the excitement, been no worse for the wear, and in a year or two be ready to flip houses in Miami or Vegas.

The point is stocks are already looking overvalued from a historical perspective. Everyone knows we’re probably overdue for a recession in the next couple of years. And everyone knows that low rates for so long have probably created all sorts of bubbles globally that now need to be unwound. But if you’re too young to remember the dotcom or the real estate bubbles of the past 20 years, don’t let anyone tell you “no one saw it coming”. EVERYONE saw it coming. The problem was you could go broke seeing it coming too early.

What we don’t know is exactly when and how this all ends. And you don’t want to be scared out of the market entirely by headlines like this sentiment reading. It is important, and it will be really important in hindsight. But things tend to get even crazier after you realize they are already crazy. You’ll be in line at the airport in Florida in 2007 and realize your entire security check in line is people comparing the investment condo opportunities they flew down for. Or in 1999 when your mechanic shows you the day trading operation he and cousin set up above the car repair shop (true stories for me!)

Sometimes being early on information can be harmful. As people around you start losing their minds it’s important to keep yours, that means not being completely frightened out too early on the way up, nor buying into the hype.

We’ve detailed a lot of defined risk bullish strategies over the past few months here on RiskReversal in names that are at all time highs and looking to break out. And that strategy has been great in times like this as the winners have participated in the breakouts, and the losers have been a fraction of the risk when the stock fails. We’ve also detailed some zero and low cost hedges for similar situations.

That of course has been paired with some very skeptical commentary about what’s driving the market to new highs. Those two things are not necessarily in contrast. And that mentality should be how you approach this market as a whole. You pay attention to the market and look for signs that others don’t. That’s why you’re reading this now. Playing for a continuation of this rally isn’t necessarily the wrong thing. It certainly could go higher. Conversely, there’s nothing wrong with starting to get bearish when everyone else is clearly giddy. That is not cognitive dissonance, it’s how your brain should always work for investing and trading.

But exact timing is impossible. Be able to participate in defined risk ways if the craziness continues. And be hedging for zero or low cost for when it does all end. But if your goal is to be featured in a Michael Lewis bestseller after the next crash, know that those stories suffer from survivorship bias. The guys that avoid blowing out in the crazy years leading up to a top are the only ones left to tell their story after.