There are few sub-groups in retail hurting as bad as department stores. Yeah Amazon.com (AMZN) is doing its thing, but these companies were so late to adopt omnichannel selling strategies, too reliant on mall traffic, and have been kicked in the stones by off-price competition like TJ Maxx (TJX). There are just too damn many department store brands in too many locations.

Despite the S&P 500 (SPX) being within 2% of last month’s all-time high, and Consumer Confidence in February coming in well above expectations, the S&P Retail etf (XRT) is 13% from its 52-week highs made in early December. I’ll just copy the chart from March 9th, which I dubbed a trainwreck. It hasn’t changed much, despite some of its components (department stores making fresh 52 week lows today… DDS, KSS &TGT) : 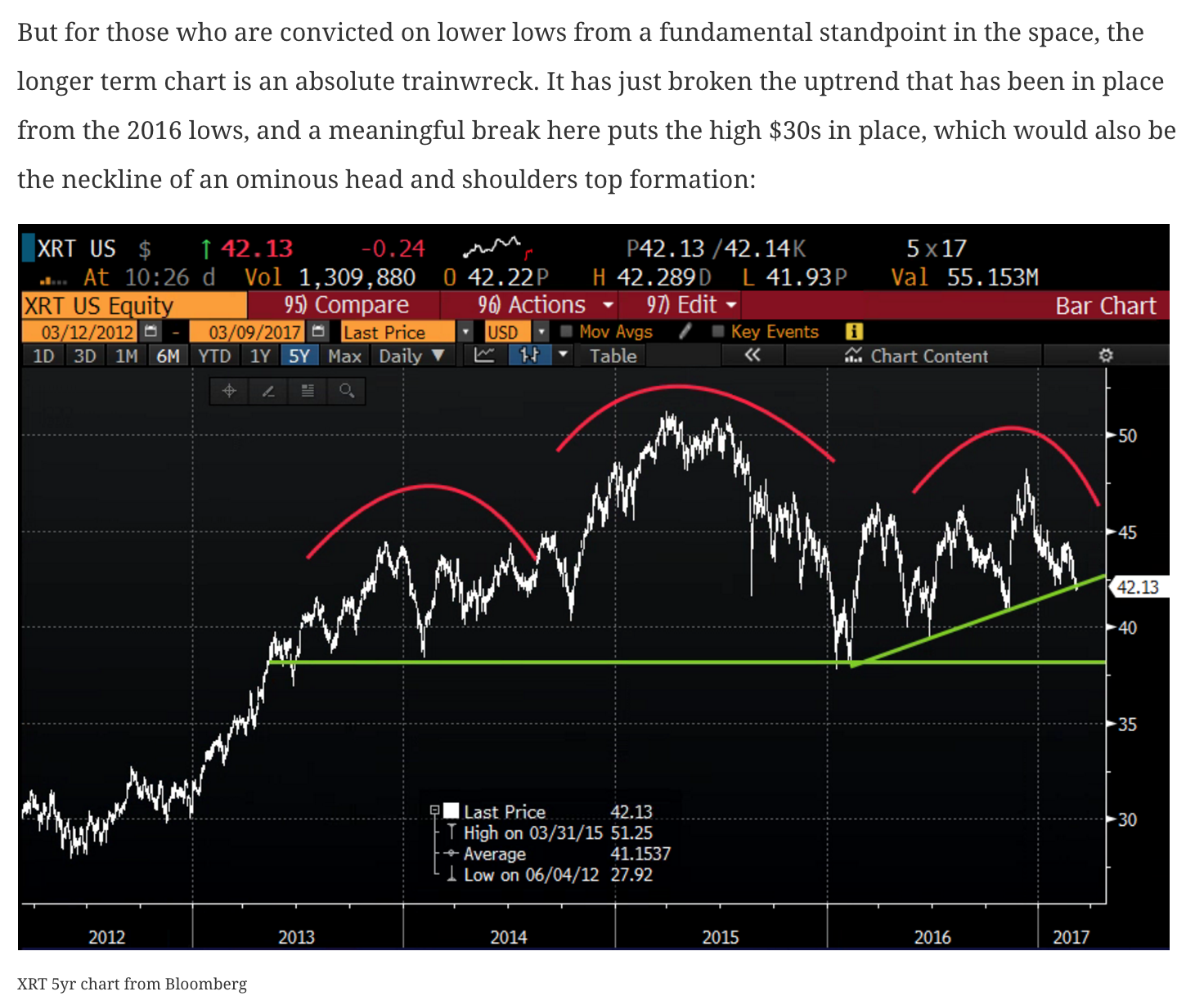 To my eye, the XRT looks like and easy short to the high $30s in the coming months, but you might get more bang for your buck playing for new 52 week lows in Macy’s (M). That is coming to a theater new you. I see little support till the low $20s:

Nordstrom (JWN) better hold at its long-term uptrend near $40, or its low $30s in a quick:

And sadly the best retailer of them all, Target (TGT) is in an all out free-fall, apparently destined for the high $40s:

And its not just department stores getting drilled by the Amazon effect, grocery stores ain’t fairing much better, with Krogers having last week just made a 52 week low, down 15% on the year and down 25% from its 52-week highs:

Lastly, AMZN has basically flatlined for a month at all time highs, up 14% on the year, and looks ready to break out at any minute.  AMZN sports a market cap of $408 billion, nearly 2x the market capitalization of Walmart (WMT), who is expected to book more than $500 billion in sales in 2017, or about 3x that of AMZN’s expected $165 billion!

As we mentioned a few weeks ago, XRT is not just made up of the retailers Amazon is killing, and in fact it contains amazon itself. But it is heavily weighted with the bricks and mortar retailers as Amazon destroys its host. These bricks and mortar retailers aren’t all exactly the same either, with TJX and HD very different than M and TGT, but the trend remains the same. The names under pressure will remain under pressure until major adjustments are made.  And we have not even mentioned the potential for any major tax reform to be accompanied by some sort of border adjustment tax that would make a difficult environment disastrous for these companies.