CC and I are both traveling with our families for Spring Break this week, if not much is happening in the market, postings may be light. I’ll be back Friday on Fast Money and Options Action. We’ll have some morning commentary, maybe few trade ideas and updates of existing trades but we won’t be staring at screens for most of the time.

On Friday’s Options Action on CNBC the panel discussed Carter Worth’s bearish call on Bank stocks earlier in the week on Fast Money:

The Chart Master Carter Worth makes a contrarian call on the banks $XLF pic.twitter.com/KG2v33BH1q

I chose to expand on Carter’s technical view by detailing a bearish trade in the U.S. money-center bank that has performed the worst on a relative basis year to date but also since it’s pre-election close on November 8th, Citigroup (C), read my write up from Friday here, and watch here.

Carter and Mike Khouw made a bullish case for Nike (NKE) into their earnings due out this week, watch here. We will follow up with some thoughts on NKE prior to earnings.

I was asked by our producer’s to detail a trade structure to play for a take-out in the telecom space. I chose to use Sprint (S) for the example because it has widely been rumored to be either a merger candidate possibly with T-Mobile (TMUS) or possibly a take-over candidate as Japan’s Softback owns 83% of the U.S. wireless carrier and the company might look to some sort of deal with their newly announced $100 billion tech/media fund. Watch here.

Implied Movement in the SPY – off of a $237.03 close as of Friday’s close (which was actually down a smidge from the prior week’s close of $237.69), SPY March 24th weekly 237 straddle (call premium + put premium) went out offered at about $2 (vs the prior week of about $2.80, but that’s because the SPY trades ex-dividend on March 16 of $1.03), if you bought that and the implied movement for the week you would need less than a 1% move in either direction to break-even, a rally above $239, or a decline below $235.  As the weekly moves are getting smaller, so are the implied moves.

Nike (NKE) reports after the close Tuesday, the implied move in the options market is 3.8% in either direction vs the 4 quarter average one-day post earnings move of only 3.1% and well below the 10 year average of 4.75%

Fedex Corp (FDX) reports after the close Tuesday, the implied move in the options market is 4.5% in either direction vs the 4 quarter average one-day post earnings move of only 6.7% but above the 10 year average of 3.3%

How Chip Designers Are Breaking Moore’s Law WSJ… “Microprocessors got smaller, faster and more power-efficient, but as they reach their physical limitations, chip architecture is driving performance gains”

Surprise: Good Economic News Isn’t Always Great News for Investors WSJ… “The Citigroup Economic Surprise Index is at a three-year high; why that might be a warning sign for stocks” 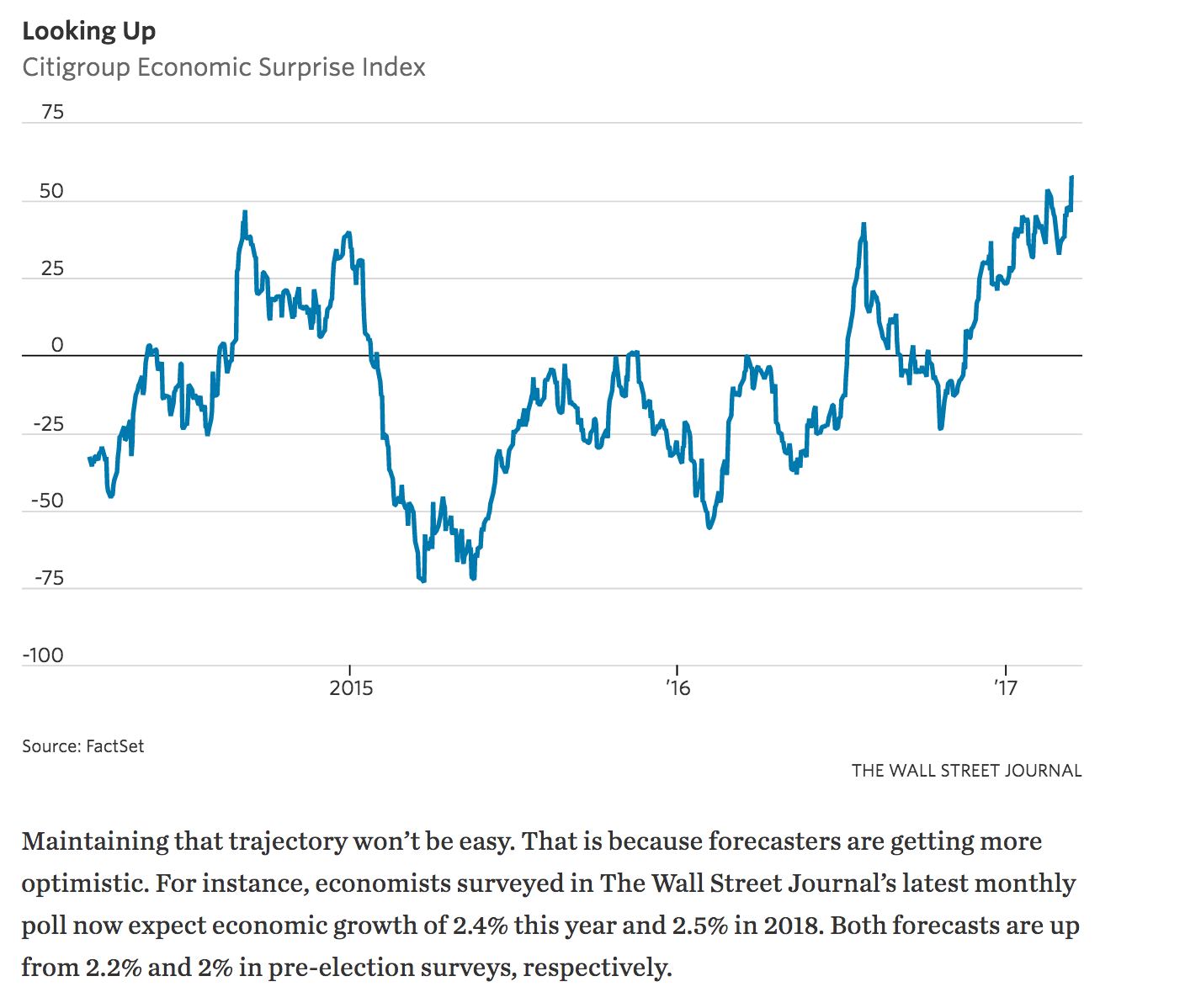 From Recode: “Uber president Jeff Jones is quitting, citing differences over ‘beliefs and approach to leadership”
He is leaving after apparently deciding the current controversies are too much to handle.