The the of today’s MoneyBeat column in the WSJ is Beware of Slumping Transports. If 2017 isn’t your first rodeo, then you know why. Transports and Dow theory are a bit ol’ timey, but it’s always worth keeping an eye on the sector: 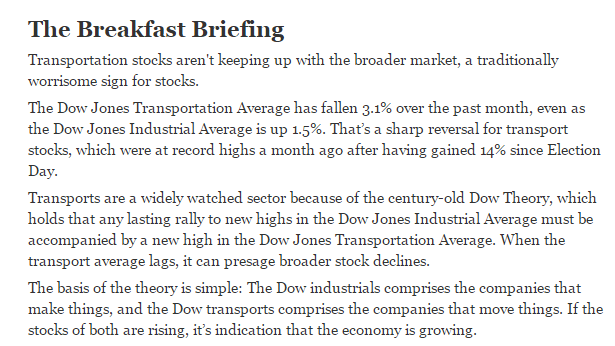 Since the close on November 8th, the etf that tracks the Transports sector is up 11%, mildly underperforming the Dow Jones Industrial Average (INDU) which is up about 14%. That’s reflective of the IYT’s 2017 underperformance, up less than 2% vs the INDU up 6%. What’s interesting to me about the Transports is that the for the better part of 2016, the long consolidation in the sector, well off of its 2014 all time highs, was widely viewed as a sort of canary in the coal mine for investor sentiment regarding economic growth. Despite making a new all-time high on March 1st, the etf has dropped 3%, but remains in the 4-month range since the post-election breakout:

From purely a technical standpoint, the recent flag (consolidation) might prove to be an important pivot point as the mid-point of the range is nearly equal to the prior all-time high back in late 2014:

Nearly 20% of the weight of the IYT is Fedex (FDX) and United Parcel Service (UPS), a group fairly levered to economic activity, but it’s important to remember that these two stocks are not only locked into a battle with one another, but facing a massive secular challenge from Amazon in deliveries from their own fleet and possibly from drones. So trains planes and automobiles, what are they telling us about the prospect for the new administration’s promise of 3 to 4% GDP growth?

Short-dated options prices in the IYT are very near the lower bounds of the 1 year range, with 30 day at the money implied volatility at 16% (blue below), well below its pre-election November highs of 24%, and very near its 30 day realized volatility (how much the etf has been moving, white line below). In other words, options look cheap for traders with a directional inclination:

We will be sure to follow up with some trade ideas.