In case you missed it on Tuesday, Carter Worth, technician extraordinaire from Cornerstone Macro Research, and my Options Action Co-panelist made a compelling case to take profits in the bank stocks as they have shown very poor relative performance to the broad market in 2017, watch here:

The Chart Master Carter Worth makes a contrarian call on the banks $XLF pic.twitter.com/KG2v33BH1q

Carter goes on to make the case that bank stocks since 1990 actually don’t outperform in the six months after a rate hike: 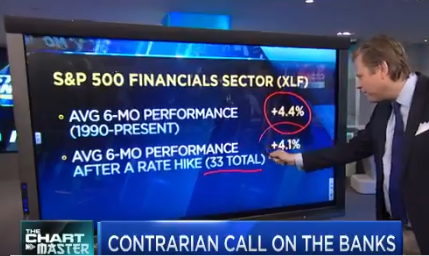 Let’s pick on the underperformer. Citi is scheduled to report Q1 results April 13th, prior to the open. With the stock at $60.50, the at the money April 13th weekly 60.50 straddle (the call premium + the put premium) is offered at $2.80, implying a 4.6% move in either direction between now and then.

If you are inclined to pick a direction, you can get near the money participation for far less. Taking a quick look at the one year chart, $60 appears to be healthy near-term support, while the low made in Feb, the low for the year so far seems like a fairly reasonable downside target if the yield curve continues to flatten and forward guidance reflects the uncertainty of the pace of rate hikes and deregulation, two of the main drivers of the sector’s performance since the election.

Short-dated options prices are cheap as chips, with 30 day at the money implied volatility very near 52 week and multi-year lows, just above 20%:

Rationale – close to the money bearish positioning with a 4 to 1 potential payout. A 50% premium stop on the upside makes sense and patince could pay off if the stock heads lower as 55 is easily identifiable support.