Yesterday marked the 105th consecutive trading day without a one percent drop on a closing basis. Here’s how that ranks among other streaks (from BoA/ML on Tues, h/t Zerohedge): 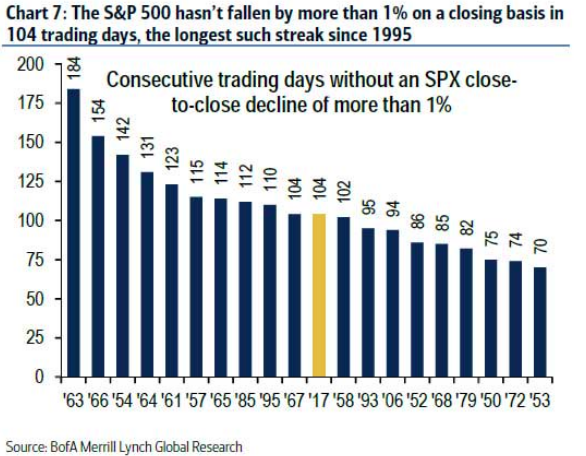 Obviously, this lack of fear in the market flies in the face of what’s going on on the ground, with an FOMC and other central banks about to raise rates and remove accommodation in their most significant form since the Great Recession. Political upheaval in Washington, with tons of uncertainty on tax, healthcare, infrastructure spending, immigration and trade policy. And of course geopolitical uncertainty overseas as the EU is under threat from Brexit and upcoming elections in France (they dodged a bullet in the Netherlands) and then Germany, as well as a US President and his special advisor that have called into question the need for transatlantic military alliance NATO.

So how is the market able to to shrug off all of this and climb a wall of worry? For some, most of the reasons listed aren’t huge threats. NATO was a cold war era alliance, the EU was designed to fail eventually, the populist part of the new President’s campaign was always a con and the policies actually being implemented are classic market friendly deregulation and tax cuts. No big deal for markets, no reason to panic. And most importantly, just how scared should we be that rates are about to rise? And more importantly, how far will they go? 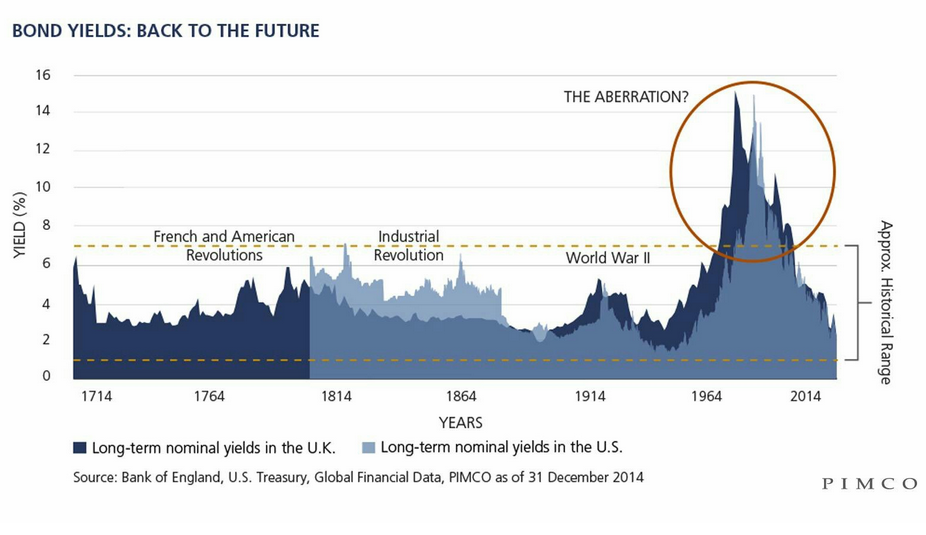 A lot of market participants are old enough to remember the days of 12% mortgages. That memory makes today’s rates seem ridiculously low. And many have an expectation that bond yields are about to go on hyper-drive, and take stocks down in the process. But we’re coming off of what appears to be a historical aberration, and people may need to back their charts up a bit more to see where we’re more likely to reset to. Many have, and don’t expect the FOMC to move very fast anyway. Betting on the Fed making a sudden or aggressive move that would spook markets isn’t a bet with very good odds.

And finally the big question on volatility… is it different this time? Here’s a long term chart of the VIX: 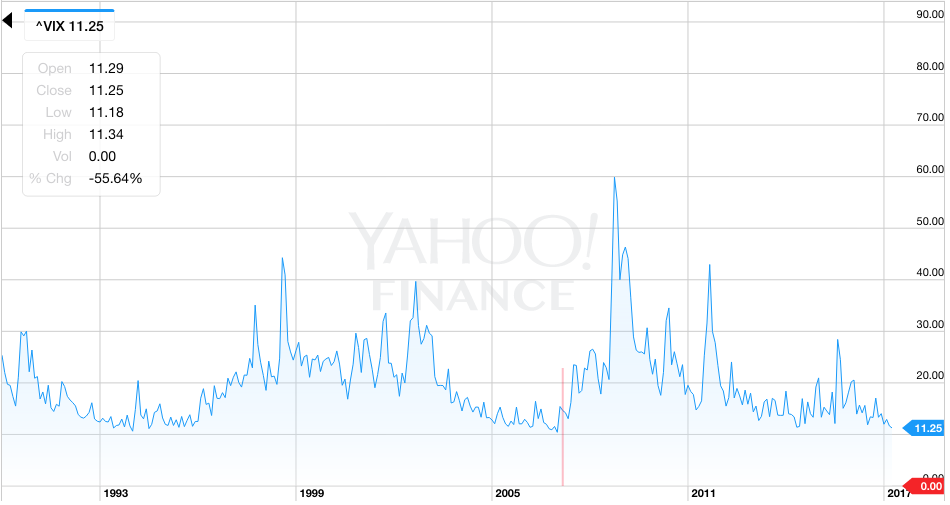 As you can see we’re in a very similar period to the mid 90’s. The lull in the mid aughts was shorter. When I started trading options in the late 90’s we used to make fun of the old timers (guys over 30) who traded through the mid 90’s and were scarred for life from ever wanting to own even the slightest bit of options premium. That of course lead into the dotcom bubble where vol was almost impossible to price high enough.

Will this post Great Recession lull end similarly? Has anything changed since then so that it’s different this time? Obviously, one of the biggest factors since the Great Recession has been central bank accommodation, colloquially the “fed put”. Everytime markets have been spooked in the past few years, central banks have been there with a promise to do “whatever it takes”. But in some ways the late 90’s were similar under Greenspan during the Asian and LTC crises. And we know how that ended…  with a dotcom bubble. But at least that’s a possibility to compare to now, maybe it’s not different this time.

But a more fundamental change to day to day markets is taking place right now, and it’s the most likely candidate if we look back in 10 years and say “things changed, it is different now”. A growing portion of the markets are being traded not by humans, but by algorithms. It started with quants on trading desks, spread to HFT and is now taking over the individual investing world with robo-advisors. Most of the day to day gyrations of the market feel different, most days you get the sense R2D2 is on the other side of your trades.

Also, computer algorithms don’t panic. But they can break! And this could be the preview of what things are like. Long spells of complete algo driven calm, disrupted by the market equivalent of The Blue Screen of Death… the Flash Crash.

This of course, is the type of speculation a human does when the VIX is 11 and the market hasn’t closed down 1% in 105 days. It usually ends with you realizing you were just bored and you top ticked the market. But you know who isn’t bored and wasting time thinking about all this? Computers.