Over the weekend, The FT ran this gem of a title, US Treasuries: On the cusp of a reversal. This comes, of course, on the cusp of the FOMC meeting this week where expectations point to the U.S. Federal Reserve raising rates for only the third time in 10 years. FT is suggesting that this time around, interest rates could rise steadily, as risk of faster US interest rate cycle looms. This has been said for years, probably hundreds of times since the so-called Taper Tantrum in 2013 that saw the yield on the 10 year rise to 3%, from the 2012 low of less than 1.5%, only to round-trip the move, making a new all-time low in 2016, despite the end of QE in 2014 and ZIRP in 2015:

Near term, depending on just how hawkish the Fed is Wednesday, the 10-year treasury yield looks ready to party, with 3% in the offing:

The FT article included this nifty chart of the cycles for treasury yields over the last 80 years, and there are some fairly obvious takeaways about the causes for the rise, peak, and the eventual non-stop lower lows: 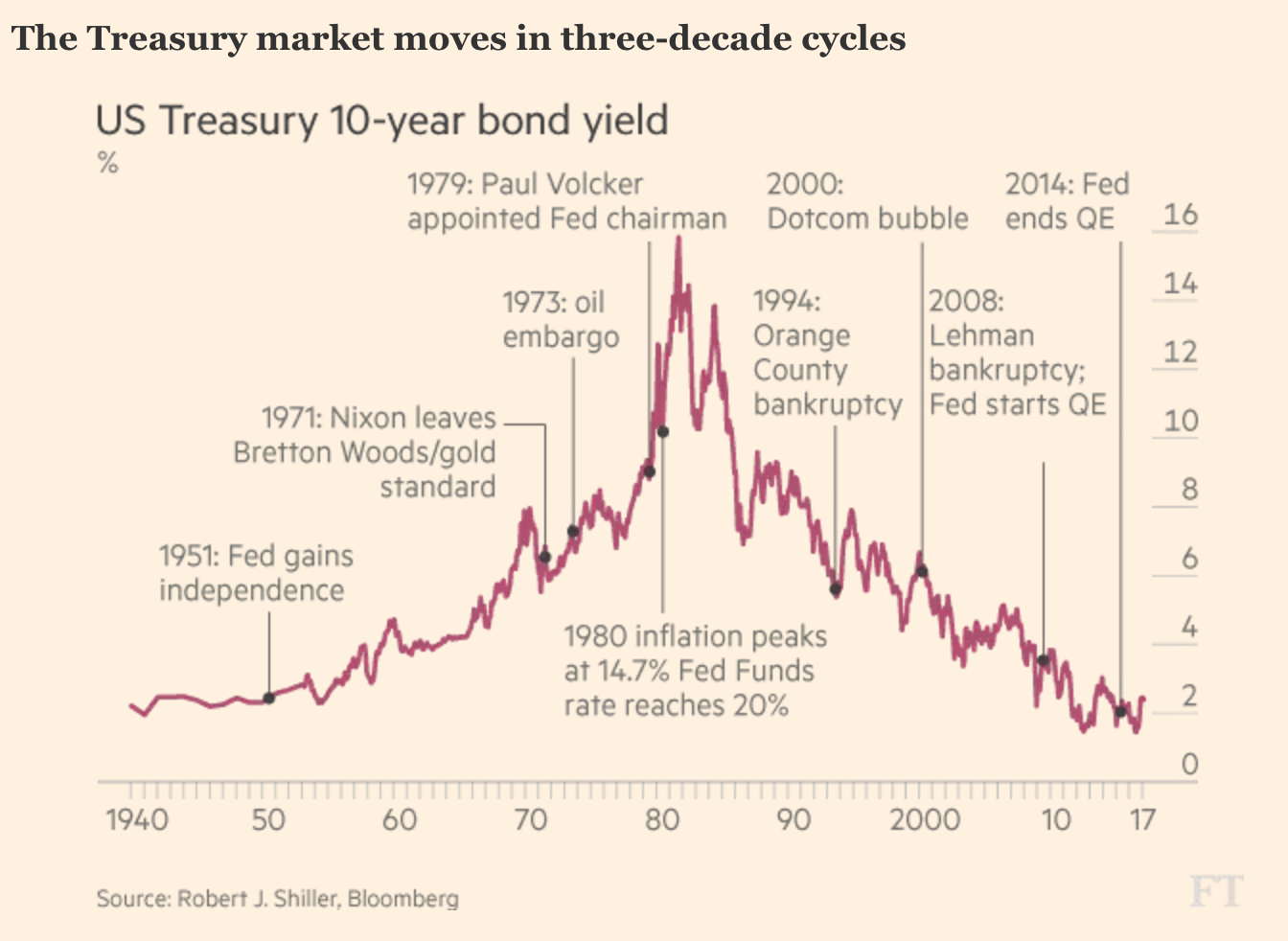 I know few traders who would be willing to risk much to make a contrarian bet that this sort of long-term breakout of a fairly epic downtrend in the most liquid risk asset on the planet:

But for you and your investments, a quick rise might cause you to rethink that ol’ reliable 60 / 40 allocation. If rates were to rise too quickly, causing stocks to decline sharply from all-time highs then you might find yourself in a period of dramatic underperformance if the real bubble was always in bonds, not in stocks (this time around). Just food for thought. I am not a financial advisor, and can’t speak to portfolio allocation, but if the Fed were to get too aggressive too soon, cash might be good spot to be in as the Fed looks to unwind a fairly grand experiment in very uncertain geo-political times.

Oh, and I’ll add one more thing, it’s fairly interesting that despite all the rhetoric and reasons over the last 30 years for advocating for a strong or weak U.S. dollar, it really hasn’t had a meaningful impact on Treasury yields as they have been on a one way track while the U.S. dollar index has risen and fallen. the dollar index is very near the exact spot it was when Treasury yields peaked at 10% (!) in 1987: