On Friday’s Options Action on CNBC the panel discussed what do with the best performing sector in the market, large cap tech in a market that has defied gravity and levitates at all time highs. As a sort of exercise we discussed replacing a long stock position in Netflix (NFLX), or replicating long exposure into and out of their upcoming Q1 earnings print expected in late April, watch here: 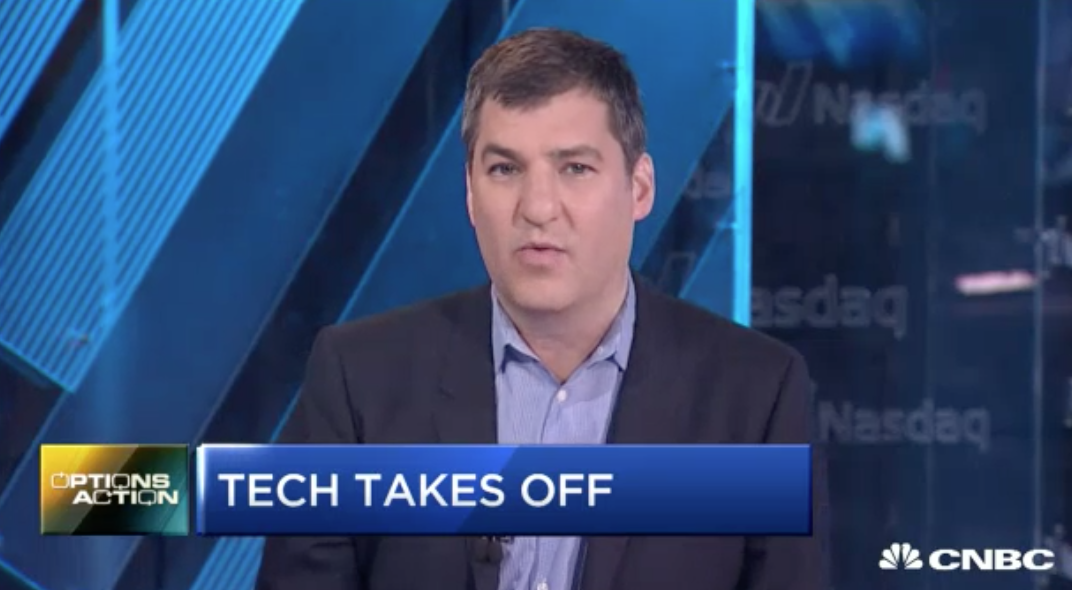 Rationale – This stock replacement limits risk for the next few months, including earnings, to just $5. If the stock breaks out from recent consolidation it will participate like stock above 150, with potential for $15 in profits at or above 160. The biggest risk to this trade is the stock goes lower in the near term, but losses are limited to $5. It’s also a risk that the consolidation continues and the premium paid decays. But May catches earnings so rising vol into that event should help with the decay.
One last thing, this past week was the 8 year anniversary of the financial crisis lows, which has resulted in 250% gains for the S&P 500 (SPX) and 350% returns for the Nasdaq Composite (CCMP), well NFLX is up 6000%!!

We also discussed the price action in Snap Inc (SNAP) since its IPO a little less than two weeks ago and Friday’s listing of options on the stock, and specifically the challenges of trading options with a directional bias in options of recent hot ipos where premiums will be elevated, bid-ask wide and liquidity poor, watch here: 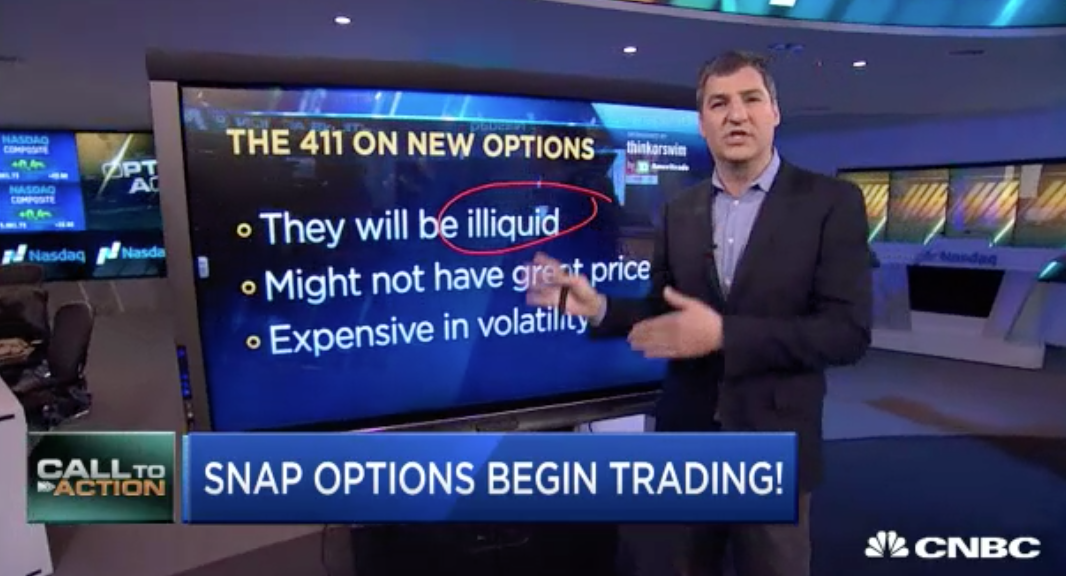 Lastly, Carter Worth of Cornerstone Macro Research likes the technical setup in shares of Coca-Cola (KO) and thinks the stock is about to break-out and play catch up to its consumer staple peers and the broad market. Mike Khouw detailed a call purchase as way to play between now and May expiration, watch here: 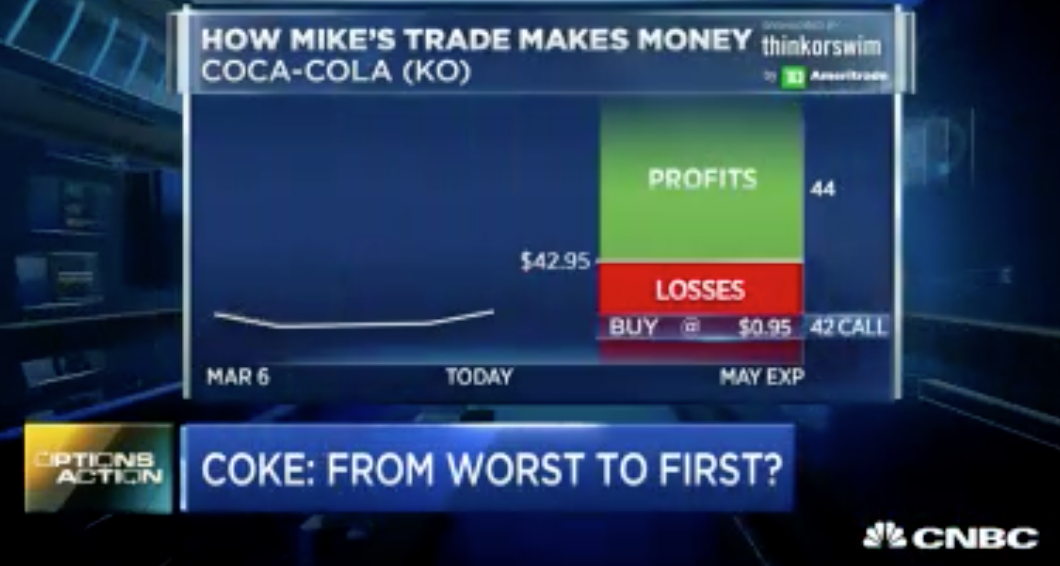 Implied Movement in the SPY – off of a $237.69 close as of Friday’s close (which was actually down a smidge from the prior week’s close of $238.42), SPY March 17th weekly straddle 237.50 (call premium + put premium) went out offered at about $2.80 (vs the prior week of about $1.80, but that’s because the SPY trades ex-dividend on March 16 of $1.03), if you bought that and the implied movement for the week you would need less than a 1% move in either direction to break-even, a rally above $240.30, or a decline below $236.70. Seems pretty darn cheap with a fed meeting smack in the middle with a near certainty being priced in for only the Fed’s third rate increase in 10 years:

Oracle (ORCL) reports fiscal Q3 earnings after the close. The options market is implying about 3.5% one day move the following day which is shy to its average one-day post-earnings move over the last 4 quarters of about 3.9% and well below the 10-year average one-day post-earnings move of about 4.8%.  The stock has declined ~4.5% following each of the last two reports. We will be sure to have a more detailed earnings preview.  We discussed ORCL in late Feb here.

Intel in $15 Billion Deal for Self-Driving Tech Firm Mobileye– WSJ, INTC Missed mobile last decade, they do not plan to miss autonomous driving and the Internet of Things (IoT)… remember their nearly $17 billion acquisition of Altera in 2015.

The big business behind the NBA’s move into esports – VentureBeat, watching and being a fan of sports will be very different in the next 10 years than it has over the last 10.

Eric Schmidt: ‘Big data is so powerful, nation states will fight’ over it – Recode… never get involved in a cloud war in data

US Treasuries: On the cusp of a reversal – FT… 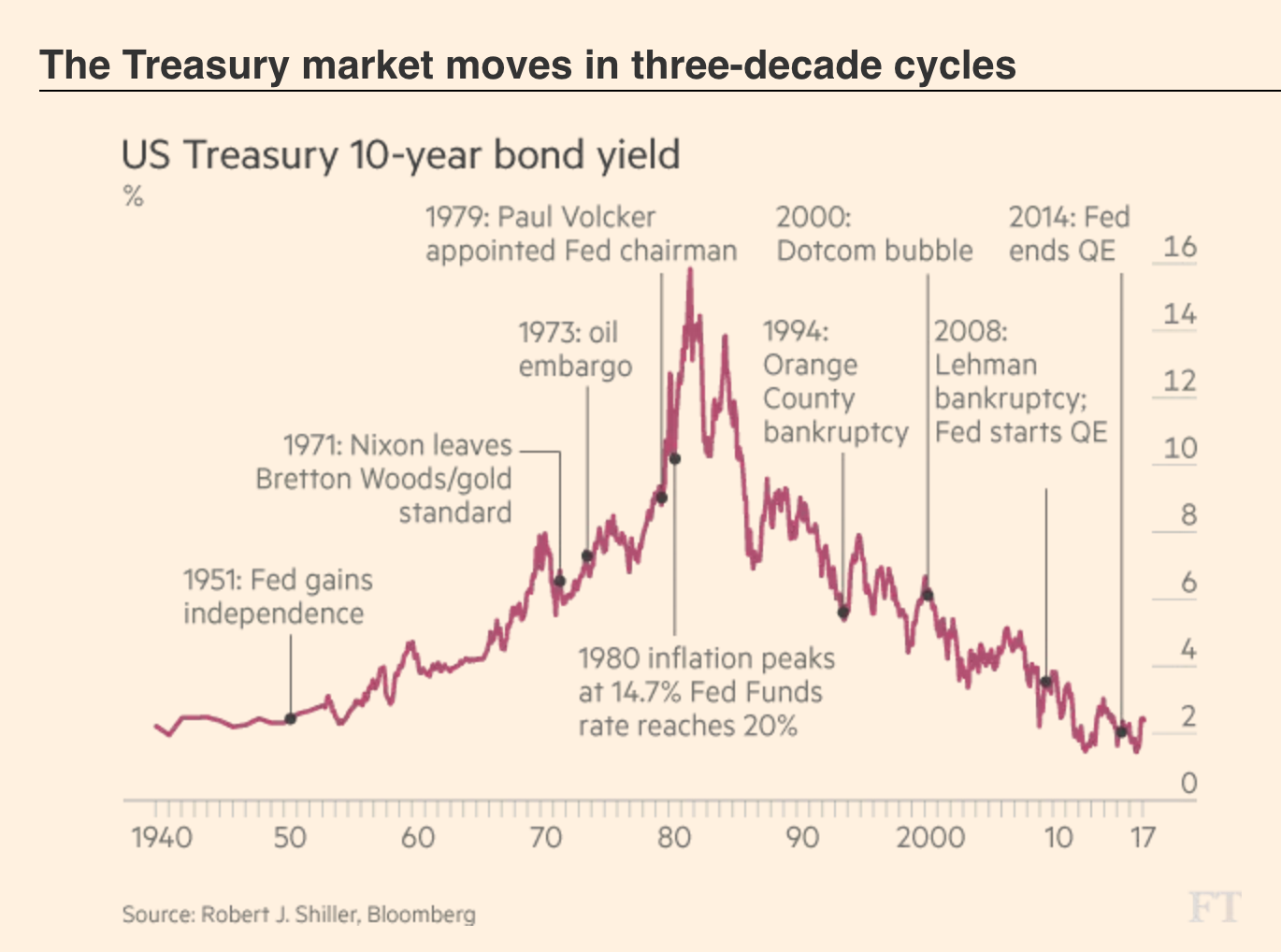