Our long national nightmare is over, options on Snap Inc (SNAP) were listed today! With the stock up 35% from its $17 IPO a week ago, down 22% from its post deal highs, it might make sense not to make a snap decision on a long entry in the stock after the stock’s recent volatility. My view is fairly simple, buying or selling the stock here based on valuation is silly. The current valuation doesn’t makes sense. For most market participants (both public and private) it’s also hard to see the company growing into its current valuation based on their current revenue model and the impediments to user growth when competitors like Facebook (FB) chose to replicate their core offerings like stories. All that said, here’s my view from March 3rd:

I would have bought on the IPO price of $17, despite what was at that price, an already stretched valuation at close to 25x expected 2017 sales. I was not a buyer on the opening print of $24, up 40% from the IPO pricing, and which placed a $34 billion valuation on the company. Some Wall Street analysts were immediately bearish on the stock, based on valuation and daunting, established competition. But the scarcity of new tech listings, specifically in the consumer internet space might create unusual demand for some time by large investment pools who need exposure to faster growing less mature companies than Facebook (FB) & Alphabet (GOOGL). Also, while SNAP is clearly a mobile social platform, it is also a pure play on augmented reality, which there are few if any in the public investing domain, so AR scarcity is also a very important part of the bull case.

And on CNBC’s Fast Money the night of the stock’s first full day of trading: 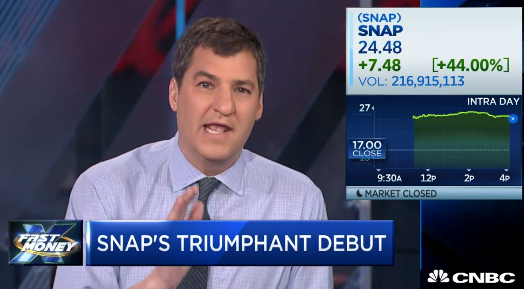 But my crystal ball is a bit foggy on this on. While the probability of it replicating Twitter’s (TWTR) public performance in the years to come is far greater than becoming the next FB, nobody knows, To quote Matthew McConaughey’s character in The Wolf Of Wall Street. “Nobody knows… I don’t care if you are Warren Buffett or even Jimmy Buffett, nobody knows if a stock is going up, down, sideways, or in circles”

So let’s go back to the shiny new SNAP options. On their first day of trading, and likely for weeks to come, they are illiquid, have a wide bid-ask, and are expensive in volatility terms. Buying options outright is a tough way to make money. You need to get a lot of things right to just break-even in options whose prices are likely to settle in greater than most every other stock in the market, given the reasons listed above, you need to get direction first and foremost, the timing and then magnitude of the move.

If I were inclined to use options in SNAP to gain long exposure I might look to sell downside puts to finance the purchase of upside calls, which here at Risk Reversal we eponymously call a risk reversal. The idea here is to not pay any premium out of pocket, but have a trade structure where under the worst scenario you would get long well below the market, while also having out of the money long exposure in the event of a sharp move higher.

Mark to Market: As the stock declines closer to the short put strike the position will show losses, worst case scenario is you are put 100 shares of stock per 1 put shorted at $17 (which happens to the be the IPO price). As the stock rallies closer to the long call strike the position should show gains. The most likely scenario is that both the put and the call expire worthless so I would not exactly call this a stock replacement strategy has about a 35% delta on the long side, which will decline as both options decay closer to expiration.

Rationale: This is a way to long exposure to the stock without a ton of risk. Who knows where the stock goes next, but if it goes down, it’s likely to find buyers at that IPO price of 17. If it goes higher the sky is the limit. Any move towards 30 or higher and this will start to act like stock. On the flip-side, a move to 17 or below and you will be put stock. So this is for buyers in the stock at that level, who may be reluctant to buy at this level, but don;t want to miss out if the stock makes a sudden move to its post IPO highs and beyond.