On CNBC’s Fast Money last night I highlighted what I deemed to be “the worst chart in the entire U.S. stock market”, the the S&P Retail etf XRT.  We wrote about it yesterday (here). While we concluded that it may be a tough press at current levels, the secular fundamental headwinds for many of its components are unlikely to temper anytime soon, and the technicals suggests that, so far, rallies should be sold. This is a fairly textbook head and shoulders top formation:

The discussion of XRT quickly shifted to Target (TGT), whose stock has been in a free fall since issuing far weaker than expected guidance on February 28th, and whose shares are down 23% on the year and sitting on massive long-term technical support, watch here: 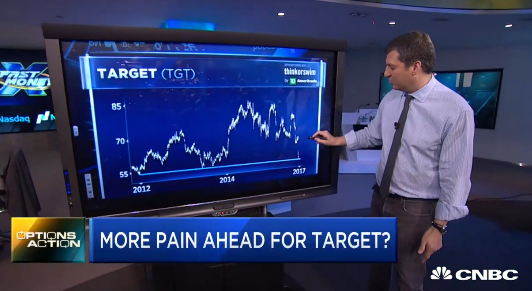 If the XRT is the worst chart I have seen, then I am projecting a bit of what it could be in the not so distant future, and TGT is clearly in the running. The stock is down 35% from its all-time highs and very well be at a sort of make or break level:

The January breakdown following the company’s negative pre-announcement, below the uptrend from the 2008 lows was clearly meaningful, which was followed by another high volume gap in February, placing the stock in an all-out free-fall, with the next real support level down 10% at $50:

Like the XRT, TGT is a hard press on the short side, and it would not take much to see the stock back at $60 on the slightest bit of good news given how poor sentiment is in the sector and most importantly the stock:

While we would be inclined to short XRT on a bounce, Target (TGT), could soon be near (at least) a dead cat bounce and could be a candidate for a defined risk contrarian long.