On CNBC’s Fast Money last night we had Technician Rich Ross from Evercore ISI. He looked at healthcare stocks, as they have been a “revelation” this year, second best preforming sector in the S&P 500 (SPX) behind Technology. He identified a handful of stocks in the group that look poised to breakout, watch here: 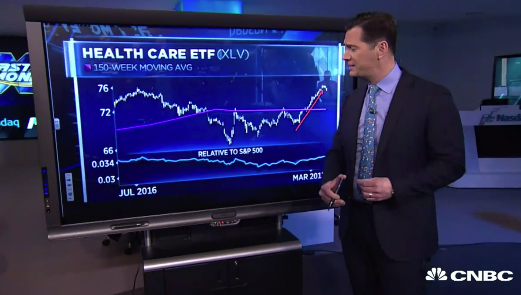 Porving that it takes two sides to make a market, I see something very different. Yesterday I posted a trade (Health Scare) on the XLV. Here were my thoughts:

Not bad price action at all, but to my eye, $76 appears to be massive near term technical resistance:

Despite the decent price action, and the potential of a breakout above the downtrend, I’m far more inclined to play for a re-test of long term uptrend back towards $70, given the headline risk after such a sharp rally (up nearly 10% so far in 2017).

As Rich said “its not all rainbows and unicorns… but strength begets strength” in a bull tape.  The relative strength in the space is nothing short of impressive given the regulatory and legislative headwinds, but I’m not sure playing for a breakout at prior resistance where most of the stocks/etfs that he highlighted have failed in the last year is the play here. I disagree with Rich’s take on the IBB, the iShares Nasdaq Biotech etf. To my eye the new 1year high last week, and for now the failure, looks to be a level traders can shoot against on the short side, possibly targeting $280, which happens to be the intersection of the uptrend from the pre-election November lows:

Much like the XLV, short dated options prices are cheap as chips for those looking to possibly hedge or replace longs with defined risk, or for traders to make outright directional bets:

The good thing about hearing two alternate opinions on the same space is that even those that agree with either viewpoint can use the skepticism of the other to keep stops tight or even better, define risk with a plan in case you’re wrong.