On Friday’s Options Action on CNBC the panel discussed the surprising relative strength of high yield sectors within the S&P 500 (SPX) ytd, specifically the Utilities sector who’s etf, the XLU is up 6% ytd vs the SPX up about 6.5%, watch here: 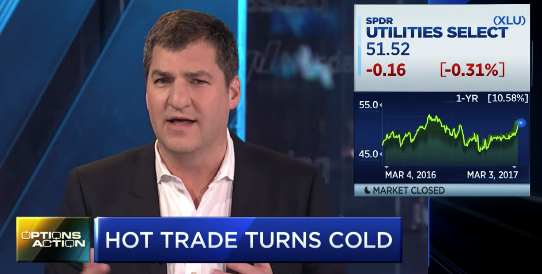 We wrote about it here, and offered a trade idea to play for a pullback between now and April expiration.

Mike Khouw and Carter Worth detailed a bearish technical view for the etf that tracks Gold, the GLD, watch here: 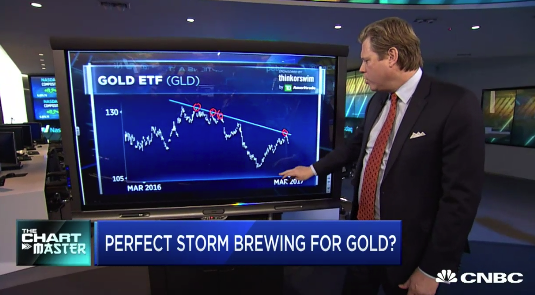 Mike laid out a defined risk way to play for a pull-back between now and May expiration. 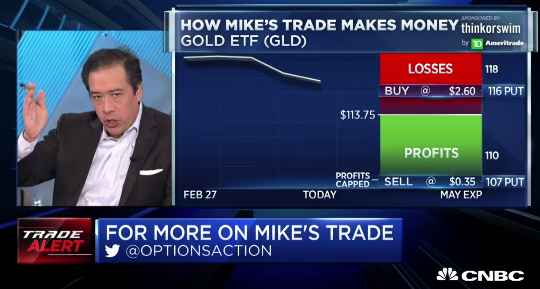 Lastly Carter made a fairly convincing technical case that shares of BA have come too far too fast, watch here: 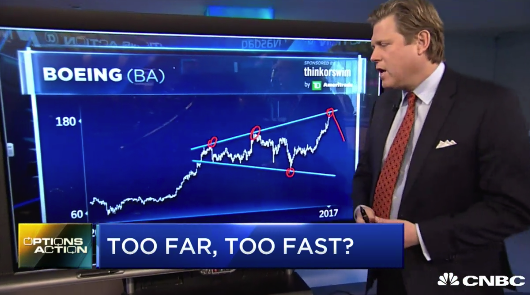 If you are going to try to pick a top, you might as well do it with defined risk, with options premiums fairly low. Mike detailed a call spread sale though, regular readers know in a situation like this I would much prefer to buy a put or put spread.

The U.S. State Department has yet to hold a formal briefing under the new administration in 2017, that happens today, per Politico.

The all important 😉 February Jobs data at 8:30am. At this point it doesn’t seem like it matters what the print is, Fed Fund futures pricing a near certainty of a 25 basis point rate hike at the March 15th FOMC meeting, which would only be the third such hike in 10 years!

This morning Bloomberg posted a chart from Goldman Sachs economists about expectations for actual implementation of proposed pro-growth policies like tax reform and an infrastructure build out … spoiler alert, don’t hold your breadth in 2017:

the strategists predict that President Trump will be tied up with repealing the Affordable Care Act (ACA) known as Obamacare this fiscal year, leaving little room for tax reform and infrastructure spending.

Goldman’s timeline shows when the bank predicts these proposals will turn into some sort of policy action. The ACA will be a big focus until this summer, and tax reform could drag out into 2018. Infrastructure, meanwhile, doesn’t even hit DC’s radar until next year. 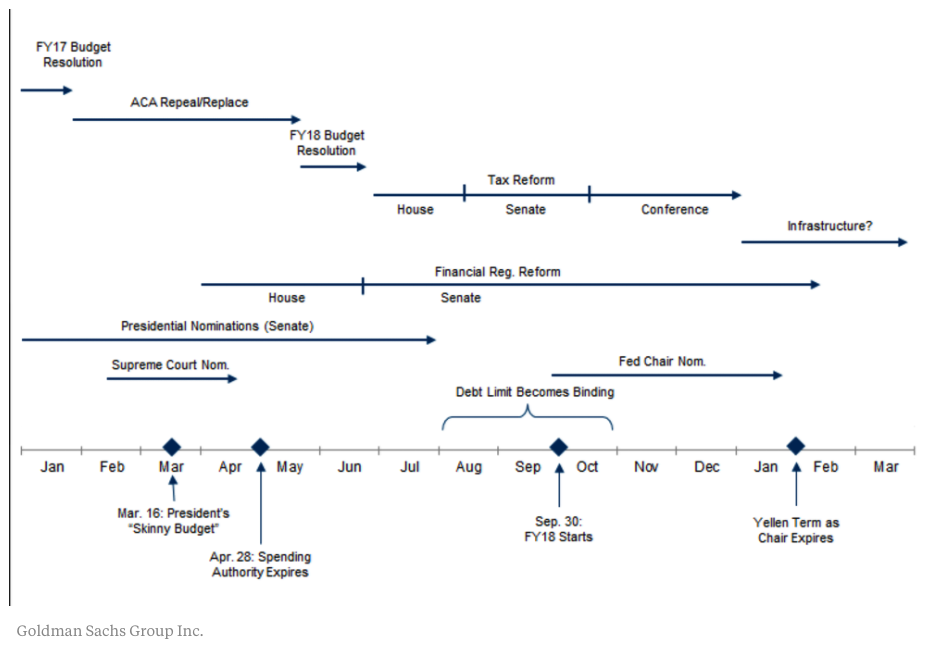 From Reuters and CNBC, good coverage of Premier Li Keqiang’s remarks on the Chinese economy:

Gross domestic product officially grew 6.7 percent in 2016, the slowest in 26 years, but within the government’s target range of 6.5 to 7 percent.
That 6.5 percent growth target is “needed to achieve the employment objective,” Li said in his prepared remarks.
The government announced ambitious jobs plans, including to ensure that every family has at least one breadwinner, which is key as jobs are cut in major state-owned enterprises.

Over the weekend Barron’s ran with the cover Rise of the Robots, suggesting… If manufacturers are going to flourish in America, they’ll need to buy a lot more robots. No worries, they offer six ways to play:

This should not come as a surprise, but Amazon.com is bad for retailers, per the WSJ… Amazon coming Yo:

Revenue for Amazon’s North America segment—the bulk of its retail business—was $79.8 billion in 2016, marking the second consecutive year of 25% growth. Back in 1997, revenue was below $200 million for its U.S. business. If its now massive North America segment continues to grow at 25% a year, it will take only three more years for Amazon to add another $76 billion in annual revenue. That could deliver a swift blow to a U.S. retail industry, already wilting from Amazon’s aggressive expansion.