Last night on CNBC’s Fast Money I detailed some bearish options activity in the etf that tracks the Utilities sector, XLU, watch: 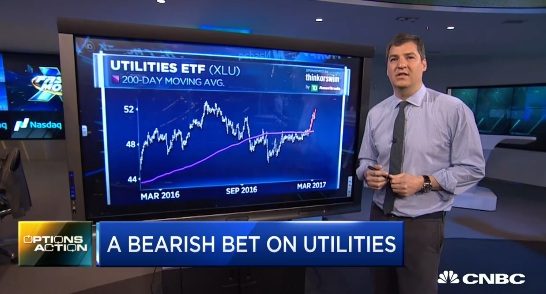 As I detailed in last night’s segment, the year to date strength in the XLU, in the face of a rising rate expectations, and strong equity market is a bit curious.

Fed Funds futures are currently pricing in about 90% chance of the Fed’s third rate increase in a little more than 10 years at their March 15th meeting. A rising rate environment should make sectors like Utilities, viewed as bond proxies, look less attractive. The put volume in the XLU this week appears to be positioning for a reversal in the sector.

The etf has found a little technical resistance at $52, which was just 2% from its 52 week highs, and appears to have decent technical support down near $48, a level it bounced off a few times in January just prior to the recent breakout:

While I am not usually a fan of following the crowd when it comes to unusual options activity, the relatively low levels of options prices is compelling to play for a reversal from upside resistance:

Rationale – The utility stocks ripped in February on a technical breakout. But we’re heading into a rising rate environment and positioning XLU to reverse some of the recent games makes sense in that environment. The 1 to 3 payout potential is nice with volatility fairly low. On the downside 49 is a realistic area to target and perhaps a place to take profits. On the upside, last Summer’s highs near 53 can be used as a stop.