On last night’s Fast Money we did NOT talk about Apple (AAPL). Possibly for the first time in years. We did talk about Snap (SNAP) though! Watch: 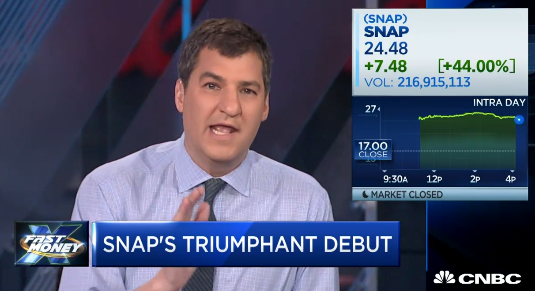 My view is simple. I would have bought on the IPO price of $17, despite what was at that price, an already stretched valuation at close to 25x expected 2017 sales. I was not a buyer on the opening print of $24, up 40% from the IPO pricing, and which placed a $34 billion valuation on the company. Some Wall Street analysts were immediately bearish on the stock, based on valuation and daunting, established competition. But the scarcity of new tech listings, specifically in the consumer internet space might create unusual demand for some time by large investment pools who need exposure to faster growing less mature companies than Facebook (FB) & Alphabet (GOOGL). Also, while SNAP is clearly a mobile social platform, it is also a pure play on augmented reality, which there are few if any in the public investing domain, so AR scarcity is also a very important part of the bull case.

So how does this whole ipo thing work?

First things first, it’s for the most part about supply/demand. Mutual funds who will own SNAP for years, if not decades are allotted most of the shares in the offering at $17. To secure their allocations, most agree not to sell shares for 1 year, and also agree to buy shares in the after-market averaging in at in this case a higher price. Hedge fund investors get much smaller allocations than mutual funds, and usually will take the money and run and look for an opportunity to buy on a pullback once the excitement from retail investors who got NO shares on the IPO at $17 are done piling in. Barring some sort of market meltdown, or some sort of disaster right out of the gates on user or revenue growth, I’d be shocked to see the stock break $17. But I would add that if the company, run by a relatively inexperienced team of senior executives. If they were to have a period similar to Uber’s last month.

Obviously I have no idea how the stock will trade, today, tomorrow or next week. Comparisons can be made to Facebook (FB) that faced similar criticisms prior to their May 2012 IPO. Facebook stock got cut in half in the months after the IPO, but has since rallied nearly 700% from its all time lows. Or you can compare to Twitter (TWTR) whose November 2013 IPO saw the stock rally nearly 200% in the months after its debut… but has since lost nearly 80% from its all time highs, and now sits about 15% from, its all time lows made last year. I know both stories fairly well, I have not been long Facebook, but have periodically tried to bottom pick TWTR, doh.

But what I told friends about the prior two social IPOs, I’ll reiterate about SNAP. If you believe in the promise of the brand, the platform and the vision of management, at some point it may make sense to average into a position, with a long term time horizon (more than a year or two), always leaving some powder dry on a position that you know will be volatile. Never own a full position, this is the type of stock to be placed in a small, speculative bucket of your investable capital.

I can’t be of more help than that. The valuation makes no sense. The product is wildly popular but its future promise is unknowable. But make no mistake, the service has found a very loyal following among a demographic that advertisers love. The company is committed to (and in their short existence, demonstrated) making products that make the service stickier. My kids get their news from the Discover feature in between “communicating” with friends by sending dog-faced selfies. I don’t get it, and you probably don’t get it either. But we’re oldsters that didn’t grow up with our entire lives online for public consumption.

SNAP had the brilliant idea of making social media more like real life, with ephemeral content that disappears. Just like real conversations. That allowed this younger generation to be more real with each-other on SNAP conversations and stories than they ever could on Facebook, which is forever. There’s a reason the founders are in their 20’s.

But now the company’s challenge is to continue to grow from that original idea. The stickier it becomes with new products alongside its original, the greater potential it has for broader adoption, both geographically and demographically.

At the time of the Facebook deal, investors had already seen a slowdown in their core desktop offering. The stock got hammered. What they did not see was the dramatic and ultimately dominant shift to mobile around the corner. Once the shift to mobile began, and the company proved they could monetize users on a 4 inch screen, the stock was off to the races.  While SNAP will also depend on mobile advertising, and facing fierce competition from FB and GOOGL, we don’t know what’s coming around that corner, but makes little sense to discount potential innovation and monetization so quickly in my opinion.

If they don’t innovate from their original products and the platform becomes dominated by trolls, then the initial euphoria could be lights out for the stock.

Lastly, the big news in SNAP this morning is that CNBC parent company NBC Universal invested $500 million in SNAP after the freaking opening of $24!! Submitted without comment ¯\_(ツ)_/¯