Here are the Bloomberg Headlines that followed:

We are not the quick fingered sort to shoot first and ask questions later and the stock is down a few % on the news, November 9th post-election gap, which seemed to reflect investor enthusiasm that we would see some serious infrastructure spending in the U.S. and CAT would sell a whole heck of a lot of tractors.  While the stock has clearly consolidated some gains since the initial gap, under-performing the S&P 500 (SPX) year to date, up 5% vs the SPX up 6.5%, while it has out-performed the SPX by a few % since November 8th.

Near term though, the stock has found some mild resistance just below the nice round number of $100, while obvious technical support appears to be very near the intersection of the Nov 9th gap and the uptrend from its late June post Brexit lows:

As stated above, makes little sense to trade off of headlines like this, but in our case it made us take another look at the stock, consider the reasons for the stock’s strength, look out to their next identifiable catalyst (Q1 earnings on April 25th), and basically out on our radar. And a side note, TWTR should be better at monetizing that sort of man on the street reporting. That tweet was posted almost an hour before the news hit the wires and we saw it 5 minutes before the stock tanked (time stamps are MST): 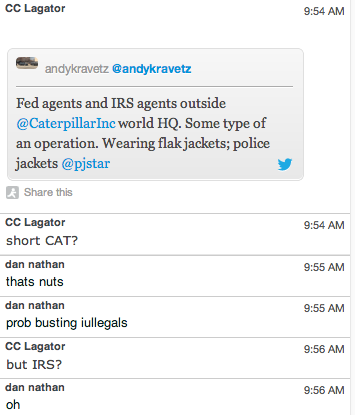