Before we get to the week ahead, let’s do a quick recap of Friday’s Options Action on CNBC:

We started the program by discussing the low levels of market volatility in 2017. The stock market is slowly grinding higher, but the broader indices and the VIX are masking some fairly pronounced moves of different sectors as they’ve seen money flows in and out based on winners and losers from economic policies in DC. For instance, healthcare stocks had a bumpy ride in last year’s political season, but have since caught a bid. On Friday in this space (Cut off Your Johnson & Johnson) we detailed a contrarian defined risk bearish trade strategy in shares of JNJ (watch here). 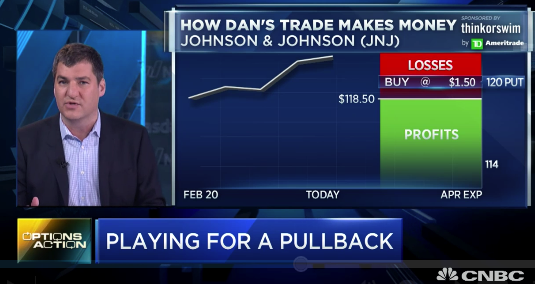 Carter Worth laid out a bearish set up in the etf that tracks Industrial stocks (XLI), and Mike Khouw offered a defined risk strategy to capture a re-tracement in the stock back towards technical support in the etf at $62 through April expiration (watch here). The trade was to pay 70 cents for the April 65/62 put spread when the stock was $65.40: 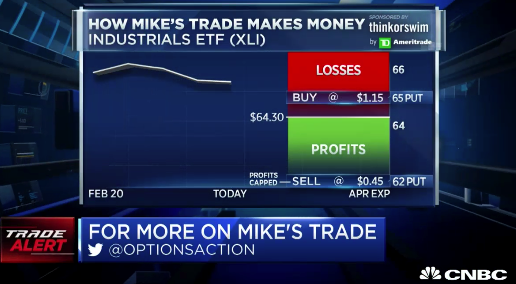 Implied Movement in the SPY off of a $236.74 close last Friday, SPY March 3rd weekly straddle 236.50 (call premium + put premium) went out offered at $2.10, if you bought that and the implied movement for the week you would need less than a 1% move in either direction to break-even, a rally above $238.60, or a decline below $234.40. Seems kind of reasonable, when you consider that last week’s implied movement was only $1.75 for a four day week and nearly realized that move.

Despite Feb jobs data falling on March 10th, there is a ton of economic data this week, Monday Pending Home Sales, Tuesday will have a second estimate of Q4 GDP & Feb consumer confidence, Wednesday will see ISM, Auto sales and the Fed’s Beige Book.

The main event though will be the President’s Prime Time address to a joint house of congress Tuesday evening. Bloomberg did a quick little rundown of expectations of financial markets, here. This might go as

EARNINGS OF NOTE: [Before Open = BO, After Close = AC]

Salesforce.com (CRM) – AC: implied one day move in the options market ~5.5%, basically inline with the 4 qtr.

David Rosenberg: Cautious on the Trump Rally from Barron’s… Rosie’ nailed the financial crisis dead to rights, has been a cautious bull now for years.

Warren Buffett, in Annual Letter, Offers Hymn to U.S. Economy from NYT Dealbook… He wanted Clinton, he got Trump, all good for his investors though.

The World’s Most Radical Experiment in Monetary Policy Isn’t Working from WSJ… you know who help us if we are on the precipice of another financial crisis. Remember this gem from August 2015 from the WSJ John Hilsenrath?: U.S. Lacks Ammo for Next Economic Crisis

GE’s Immelt Sees New Era of Globalization as Protectionism Grows from Bloomberg…  this guy has the President’s ear, maybe the one that actually hears.