TJX Companies (TJX) reports fiscal Q4 results tomorrow before the open, the options market is implying about a 3% one day move, which is rich to the four quarter average one day post earnings move of about 2.5%.

TJX has mildly out-performed the retail sector year to date, up 2% vs the XRT, the S&P Retail etd, which is down nearly 1%. Aside from what seems like a mid-summer’s dream last year, shares of TJX have spent the better part of the last year trading between $72 and $80:

Taking a slightly longer term view, TJX has held its uptrend from its 2010 lows like a boss, with the recent year long’s consolidation possibly a perfectly healthy condition in anticipation of a breakout above $80. On the flip-side, there is little  support til $70 on a breakdown below the long-term uptrend: 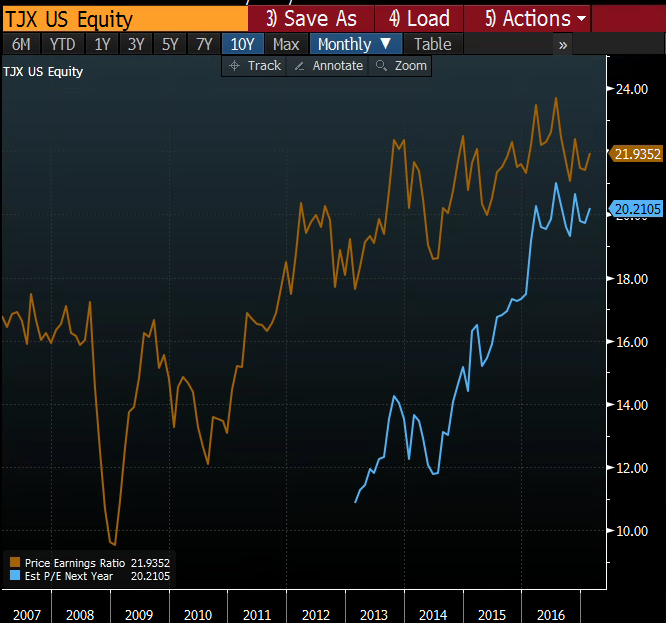 U.S retailers are thought to be some of the hardest hit in the event of a Border Adjustment Tax, one of the ways Majority Leader Paul Ryan has proposed to execute on the promise of tax reform. As the merits of such a tax are debated, retail stocks are likely to remain volatile. One thing is clear, mid to low end retailers are likely to have near term benefits of lower income tax rates for consumers but off-set by the higher costs of products passed through to consumers. The ins and outs of that relationship will be cause for some volatility. This is likely a mid year sort of thing, but any inability of the new administration to push through some sort of tax reform in congress would likely cause a deflation in consumer and corporate confidence (as it is one of the main components of the bullishness in confidence), and retailers would likely be one of the first sectors hit.

TJX is at its converging 50 and 200 day moving averages into the print. Any failure below that on the event likely sees the stock towards recent 74 support. A failure to hold that and the stock is likely to be closer to 72 over the next few weeks. Targeting that move needs to define risk, as a move the other way could easily see the stock attempting a breakout above 80.

Rationale – This trade idea targets a range or profitability just below where the stock is trading. The best way to think about it is mildly bearish positioning where a move to the lows of the one year range is the ideal situation, not a break below. Since the breakeven of 76.10 is just below where the stock is trading (76.50) even a small move lower will be profitable. A move higher and the entire 1.40 is at risk but that’s less than the implied move on the event itself (it’s unlikely it would be completely worthless on a move higher unless it the move was massive). But risk is defined in case of a move higher, with good risk reward for a potential move lower. Since the fly is in the money, with a breakeven barely below where the stock is, premium in a vol crush is not that big of an issue. If the stock goes nowhere the trade will only be worth slightly less with a few weeks to be right. If this is used as a hedge, and not just a bearish position, do know it has no protection on a massive decline lower and can actually lose money. For those long and really worried, a wide out of the money put spread makes more sense. Under most scenarios though, this will work as a hedge on a realistic (and not disastrous) move lower.