As we’ve mentioned a few times recently (most recently here and here), volatility in the broader market is at a historically significant low level, both realized and in the price of options. On the realized vol front, or how much the market is moving day to day, the SPX has gone 48 consecutive trading days without a 1% move (it looks like today will make that 49). Here’s how that compares since 1970, from Bespoke: 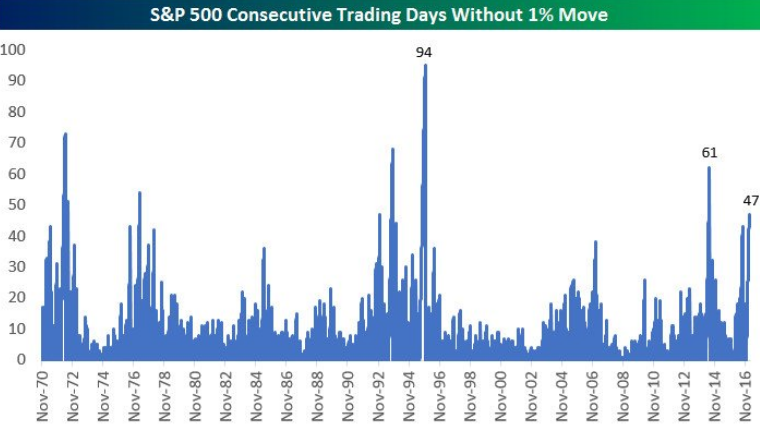 On Tuesday we detailed a long VIX futures strategy that would take advantage of a pop in implied vol from these low levels over the next month. Spot Vix is up nearly 10% from last week’s lows.

Today we’re going to look at a strategy to play for the first dose of realized vol that could come in the next few months. With spot VIX below 12, hedges and bearish options trades in the SPX are dirt cheap. This trade idea works as a portfolio hedge or an outright bearish positioning, risking just 1.3% to profit or protect vs a 10% move lower in SPX before May expiration:

Rationale – Again, no one knows when this current low vol rally will come to an end. But it’s unlikely historically to continue for the next few months. This entry could be wrong, but for those looking to hedge or take a bearish position right now, it comes at such a low cost relative to the index itself because vol is so low. If the market were to correct in any way the break-even at 227 targets the recent consolidation, essentially locking in profits below vs a portfolio. For those simply looking to fade the recent breakout, even a move back to that consolidation would garner a nice profit on the trade, and then have the opportunity for much more if it was unable to hold that level. Vol is not an issue as even on up days recently the VIX has shown signs of putting in a bottom, and string of down days and this trade will benefit from a pop in vol in addition to the short deltas.
There have been no shortage of reasons for the melt-up in the SPX, our favorite perma-bulls over at ZeroHedge took a crack at a complicated situation that might have exacerbated the recent move:

Here Is The “Catalyst” For The Market’s Inexplicable Surge: A $17 Billion Trade Gone Wrong | Zero Hedgehttps://t.co/9wqGR7IhGapic.twitter.com/3x87JLc9zi

I have no idea as to the why, but I am fairly certain at some point in the not so distant future we are likely to have a vol shock of epic proportions. I can not remember another time in my 20 year career where complacency was so high while the risks so clear and present.

The first leg lower will be down about 5%, very near the 2200 -SPX / 220 – SPY breakout level from late Nov/ early Dec. Below that there is an air-pocket to the early Nov pre-election lows: