Yesterday shares of Boeing (BA) closed at an all time high, up nearly 10% on the year, just weeks after breaking out of a three year consolidation following their Jan 25th Q4 report:

The big news yesterday was that BA’s CEO seems to have unique access to President Trump, per Bloomberg:

Listening in on one of those calls was Dennis Muilenburg — the CEO of Lockheed’s chief rival, Boeing Co.

This follows up on the company specific dust-up from last week when The President tweeted about Nordstrom (JWN) dropping his daughter’s clothing line. And before that we saw him publicly criticize Lockheed Martin on the F-35, but also Boeing on the cost of the new Air Force One, as well as automakers like Ford, GM and Toyota.There are even a few apps out there that will alert you if the President tweets about one of your investments: 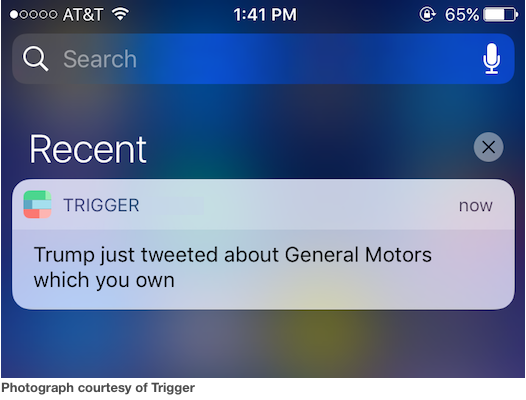 Of course, Trump isn’t the first politician to move markets. Remember not so long ago the drug maker stocks got pummeled after Hillary Clinton mentioned drug price gouging would be a focus of her administration. Most of those stocks still haven’t recovered, and Clinton isn’t even president.

And clearly some stocks are are benefiting from a close relationship with the new President. Certainly TSLA and GS have outperformed since the election on the assumption of being close to the President. And like the BA news, as we’ve written before:

But what is pretty unprecedented with Trump is the company specific nature of his negative stock stories. We haven’t seen too much of this out of politicians in the past. Now in fairness, for most of these negative stock stories, we’ve seen quick moves in the stocks then people moving on from the story. The main reason for that is we have yet to see many examples of the President actually punishing those companies. The assumption is that it’s just the President blowing off steam, Trump being Trump.

But now we have an example of something to watch more closely. We have all gotten used to the President’s criticism of the press, but this one in particular is important as Time Warner’s (TWX) $85.4 billion sale to AT&T (T) will ultimately be decided by the powers that be in the the White House. Last night it was reported that the President’s son in law and close adviser, Jared Kushner, met with executives from Time Warner, per WSJ:

expressing the administration’s deep concerns about CNN’s news coverage, according to a White House official and other people familiar with the matter.

In a meeting at the White House, Mr. Kushner complained to Gary Ginsberg, executive vice president of corporate marketing and communications at CNN’s parent Time Warner, about what Mr. Kushner feels is unfair coverage slanted against the president, the people said.

Of course, we don’t know until we know. Trump and Zucker have a relationship going back years to NBC and The Apprentice and the two apparently stay in communication with each other. It’s more of a love/hate relationship. And much of Trump’s media bashing is for show, by all indications the guy watches a ton of 24 hour news, even CNN. And his entire business and political career is based on a fairly unique skill of garnering out-sized media attention compared to rivals. We can’t look away.

Something that is interesting is we haven’t seen many attacks on Technology/ Silicon Valley companies, despite the group’s fierce opposition the the travel ban. We also have not heard word one about the global financial power structure he ran against in the campaign as Goldman and Exxon alumni fill cabinet positions and deregulation of oil and gas and banking are responsible for much of the recent rally. So far, investors have been correct, we haven’t seen any specific companies targeted, (people bought the dip on JWN) we haven’t seen any of the populist/protectionist policy yet (just battles that play out on Twitter like the one with Mexico), and de-regulation is starting to happen as we’ve seen restrictions on mining pollution and requirements of notifications of payments to foreign powers by oil and gas drillers removed.

As for the overall economy and broader market. There is little doubt that economic data the world over has been improving, a lot of that started well before his election. Investors are now watching as a little gasoline is added to the engine with assumed tax cuts, de-regulation and a proposed infrastructure plan that really is just a huge tax break for companies involved in the space. But all of this might cause the Fed to get a tad more aggressive in tightening monetary policy. That could cause further gains in the U.S. dollar, which might serve as a headwind to said growth with equities at all time highs. This is at a time with the SPX trading at 10 year highs on a trailing P/E basis. The point here is that a lot has to go right for this train to keep chugging along.