Yesterday, on CNBC’s Fast Money I highlighted some substantial bearish activity in Freeport-McMoRan (FCX). Specifically short-dated puts traded over 81,000 contracts, well above the 31,600 20 day average put volume. Most of the activity was opening buyer(s) of the March 3rd weekly 14 strike puts, over 32,000 of which traded for an average price of 15 cents. (The price of an option contract is generally quoted per share, since each contract represents 100 shares each contract would cost $.15 x 100 = $15)

Buyers of puts are generally making a bet that the price of the underlying, in this case FCX which was trading at $15.90 at the time, will decline below the strike of the put that they bought before the put expires. So in this case the buyer(s) are betting FCX shares will fall below the $14 strike price by at least the .15 per share that they paid, or down to $13.85. This would represent a ~13% decline in just over two weeks, a sharp move in a short period. 32,000 contracts represents 3.2 million shares of stock, so the size of this bet is considerable. Why might traders believe the share price could decline so sharply, so quickly? We’ll examine the trade while focusing on the three primary elements of our investment approach; valuation, sentiment and technicals.

Freeport-McMoRan (FCX, formerly Freeport-McMoRan Copper & Gold) is an international natural resources company. The company operates substantial and diverse assets on several continents. FCX has seven copper mines in North America and two in South America. Subsidiary PT Freeport Indonesia (PT-FI) operates the Grasberg gold, copper, and silver mine in Indonesia. Their African operations were in the Tenke Fungurume minerals district in Congo, however when they reported earnings they also announced that they had completed a $5.2 billion asset sale, which included their interest in TF Holdings Ltd through which they held an interest in Tenke. That asset sale also included Deepwater Gulf of Mexico and onshore California oil and gas properties. For FY2016 they divested $6.6 billion in assets. FCX also has molybdenum mining assets, primarily in Colorado, along with gold, silver, cobalt, oil, and gas. FCX’s proven and probable reserves totaled 99.5 billion pounds of copper, 27.1 million ounces of gold, and 282.9 million ounces of silver.  FCX is also owns smelting and refining operations via a 25% stake in PT Smelting, a copper smelter in Indonesia, the rod and refining copper conversion segment in North America and Atlantic Copper, which operates a copper smelter in Spain. (source Bloomberg/Hoovers) 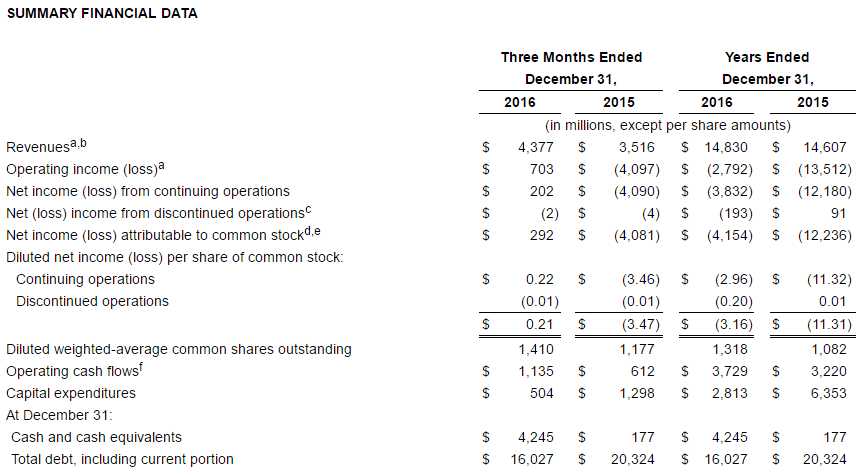 As always we encourage readers to examine corporate earnings reports carefully. Management comments often help guide investors towards the critical drivers and metrics of their businesses. Additionally they will often provide color on temporary boosts or setbacks to financial results that investors should consider as the evaluate the business going forward. Examples will typically appear early in the comments sections. For example Freeport noted that they averaged 2.28/lb for copper in 2016 (down from 2.42 the prior year) on costs of 1.26 per pound (down 1.57 from the prior year). The full report is 51 pages, and contains many insights, however the important point is that for a company that derives nearly 70% of their sales from copper, it is the price they receive for selling the commodity minus their costs for producing it that matters. Since we may assume management will attempt to operate as efficiently as possible, costs will be inflation and operational challenges such as strikes or other struggles related to the potentially volatile political climate where some of their mines are located. The primary driver to revenues is the price of copper.

FCX and copper both rallied sharply beginning in early November as traders speculated on higher material demand. The narrative? Copper would benefit from a “Trump Rally” due to increased demand from large infrastructure products. Then candidate Trump campaigned in part on a $1 trillion+ infrastructure spend. Copper responded. Even assuming the company massaged some of their cost numbers between 2015 and 2016 if we take the average of the two years costs, or ~1.41/lb, at the current price of 2.75/lb today (roughly 24% higher than the average price for the commodity in 2016) this would represent substantially higher margins and therefore expected profits for 2017. A bearish put buyer is betting that the price of copper will fall short-term, but will it?

Supporting the bearish thesis in copper is Tom Price, a global commodity analyst at Morgan Stanley whose suggested today that the rally in copper may be over. He pointed out that even if President Trump ramped infrastructure spending, much of the benefit to copper might be overshadowed by the negative economic impacts of protectionist trade policy his recent rhetoric is indicating. Mr. Price suggested copper could fall to pre-election levels, which certainly removes one of the legs of the stool for the bulls in FCX.

While we won’t immediately concede that copper will give back all its gains, we do believe that many investors are hearing only what they want with respect to the new President’s economic plans. Even under the best of circumstances the road to his infrastructure spend is strewn with 535 potholes in Congress, many of whom are at least as bad as any we would find on the nation’s roadways. At least on the sentiment front, it certainly makes sense that copper may have run a bit too far, a bit too fast.

How about the valuation? On a trailing basis at least, Freeport looks pretty good. At today’s closing price FCX is trading with a market cap of 21.650 billion, just 12 times the 1.8 billion in FY2016 profits the company reported two weeks ago. Of course we cannot drive by looking in the rear-view mirror. Wall street appears to be anticipating lower profits in 2017, with the average of analysts’ forecasts around 1.644 billion. Still that would represent a multiple of ~ 14.2x FY earnings. Still a discount to the broad market and even to the company’s peers. It is worth noting though that the forward valuations are highly fluid. Recently inflation data has been higher than expected, and while generally we expect higher inflation to result in higher commodity prices (thus preserving margins for companies like Freeport), it is possible to see higher production costs and lower average selling prices depending on supply and demand. Consider if we take the pre-election copper price of ~$2.10/lb and the 2015 costs of 1.57/lb. That .53/lb spread is substantially smaller than if we take the current price of copper at $2.75 versus the 2015 cost of 1.26/lb or roughly $1.50/lb margin. The sensitivity to both costs and their commodity sales prices along with a balance sheet with $15b in net debt suggests a volatile share price!

Finally, how do the technicals look? For the moment the mid-term bullish trend, looking out six months, remains intact. This agrees with a bullish 60-90 day thesis Carter Braxton Worth laid out on Options Action last Friday, February 10th. Citing low options prices, I suggested buying an April 16/19 call spread would be a reasonable way to make that play while avoiding the risks of a pullback such as the one today’s options traders appear to be betting on. The 1 month trend, which had been bullish through the first days of February has turned neutral at best. The stock saw a 17.06 intra-day high (now resistance) January 24th, the day prior to their earnings report. Since then the stock has traded relatively poorly. A quick scan of the significant shareholders reveals where some of the weakness may be coming from. Technical analysis seeks to reveal what other market participants may be doing, and it seems that Carl Icahn, one of Freeport’s top shareholders, has been taking advantage of the recent strength to sell a substantial block of shares. According to his most recent 13f filing, he had reduced his holdings by 12,763,704 shares as of December 2016. It’s likely that he may have sold more shares since then. Significant sales by major shareholders would certainly explain some of the recent technical weakness.

While today’s bearish activity did not tick all the boxes (valuation, sentiment, technical) for us to go along with it, the bullish sentiment in copper may indeed be overdone leaving the commodity vulnerable for a near-term pullback. Our fundamental analysis reveals that today’s cheap valuations may be a mirage if cost forecasts are too low, or anticipated selling prices for copper in particular are to high. Either way, the leverage of the company to infrastructure, inflation and its own debt-ridden balance sheet suggest moves could be sharp, and options are reasonably priced given that potential. For all of these reasons, although I’m not buying puts alongside today’s trader, I understand why one might.