Is the Optimism in Emerging Market Equities Justified?

A very curious phenomenon is taking place in the equity markets right now. Emerging market equities are performing quite nicely and have been doing so since the national election this past November.  We say curious because a rally in emerging market is inconsistent with the fundamental narrative shared in the financial media. During the presidential campaign, Donald Trump ran on a platform of trade reform. Specifically, he said he would put an end to the North America Free Trade Agreement (NAFTA). NAFTA is a trade agreement that allowed a free flow of products between the United States, Mexico and Canada. He said the government should replace it with what he called “a better deal.” He said be would kill the Trans-Pacific Partnership (TPP). The TPP is a trade agreement between Australia, Brunei, Canada, Chile, Japan, Malaysia, Mexico, New Zealand, Peru, Singapore, the United States and Vietnam, designed to lower both tariff and non-tariff barriers as a means of increasing global trade. TPP is a companion agreement to the Transatlantic Trade and Investment Partnership (TTIP), which is a similar agreement between the US and the EU. While that has not gotten much press, that agreement is probably vulnerable as well.

Adding to our curiosity, the new administration has not signaled what they intend to do with respect to our relationship with the World Trade Organization (WTO) and all the various trade agreements like those described above along with all the bilateral agreements the US has with virtually every countries around the world. So in the final analysis, we do not know what the new trade policy is going to look like, and we suspect analysts and financial journalist do not have a clue either. What we have seen the President do is use the bully pulpit to pressure US companies to keep their manufacturing operations here in the US, and lobby multi-nationals to make new investment in the US as well.

The consensus interpretation of the rhetoric and actions take so far suggests protectionism, which will ultimately lead to a slowdown if not a reduction in cross border trade. Is the consensus is correct? We do not know. What we do know is that if trade between countries slows, the global economic is at risk of slowing down. The bigger risk however, lays with the emerging markets, which have grown rapidly through the export of manufactured goods to the developed economies. If manufacturing moves back from the emerging markets to the developed economies at the margin, the emerging economies would be hit the hardest.

Frankly, we do not have an opinion about what the new administration may or may not do with respect to trade. Nor do we intend to develop one until we see the results of new trade legislation and agreements with foreign governments. Governments by their very nature, move slowly. So it could be years before we actually know what the new trade landscape looks like. Market prices, on the other hand, move in real time and money flows summarize what traders, investors and corporations are doing with respect to capital allocation. 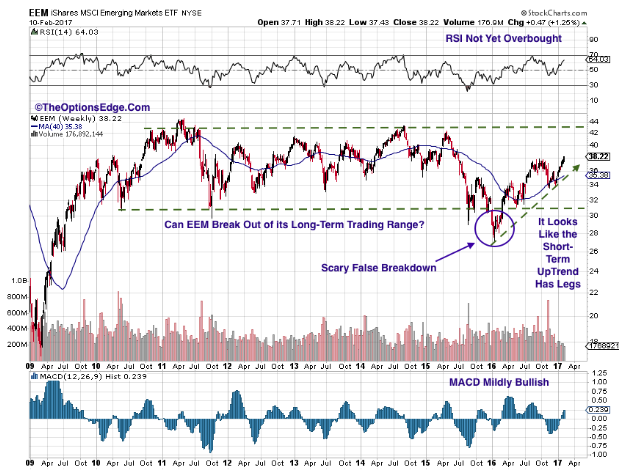 There is another issue for us to think about. It is very possible that if the US economy grows faster, so might the global economy in general and emerging markets in particular. After all, the exporting economies are the source of many important raw materials and they still have manufacturing capabilities the developed economies do not. Our intuition tells us that the current trading arrangements between countries will remain the way they are now for the intermediate term. If and how companies decide where to locate new manufacturing facilities is what is unclear to us.

If you agree with the bullish thesis above and want to position yourself accordingly in EEM, you can certainly buy the shares. This would be a good way to express a view that EEM would break out above the upper end of the trading range (circa $33). If you think the big move is over and the shares will continue to trade within the long-term trading range, you might want to consider selling an iron condor. A short iron condor is a volatility selling strategy where one sells a near out of the money put and call options, and buys a put and call that are further out of the money to limit risk.

With the stock trading at $38.28, you can consider the following structure 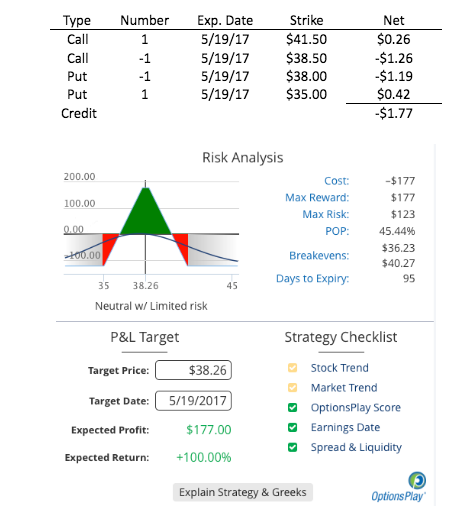 To initiate this trade, the investor will collect a nominal $177 up front per iron condor. The breakeven levels are $40.27 on the upside and $36.27 on the downside, which is about a 5% above or below the current price. The efficient market hypothesis suggests there is a 45% chance of success on this trade. Because we are using relatively tight spreads between the strikes, the maximum one can lose is just $123 per structure.

We would like to reiterate that it is important to pick the right structure that fits your thesis. If you believe the price of EEM will continue to rise without hesitation, buy the ETF outright. If you believe the share price will trade sideways for the next few months, selling an iron condor is a way to express that view. As a final point, when we see price action that conflicts with our fundamental view or the consensus view of the market, it is important to leave your ego at the door and reassess what is taking place with an open mind.