The Mosaic Company is a very simple one. It manufactures fertilizer and markets it worldwide. The base minerals, phosphate and potash, come from the company’s mining operations. They are then combined with ammonia to produce crop nutrients, such as di-ammonium phosphate, mono-ammonium phosphate, ammoniated phosphate and phosphate-based animal feed ingredients. The company also produces and sells potash for industrial use such as de-icing and as a water softener regenerant. The company sells its products to wholesale distributors, retail chains, cooperatives, independent retailers, and directly to large agribusinesses. The Mosaic Company was founded in 2004 as a merger of 2 fertilizer companies spun off from Cargill and IMC Global. In 2016, the company generated $298 million in profits on sales of $7.2 billion.

The fertilizer industry in general, and the Mosaic in particular has been having trouble the last few years, and this has been reflected in the company’s share price.

As you can see from the chart above, the share price peaked in Q1-2011 and has been in a bearish trend ever sense. Judging from the chart, we do not expect the share price to recover anytime soon. The share price broke the $34 support level in Q4-2016 and traded as low as $22.20. We think the share price is completing a corrective bounce from that low and is now running up against the $34 resistance level. (The principle of polarity tells us that what was once support becomes resistance.) In addition, the RSI is approaching over bought levels and the MACD is telling us that momentum is rolling over. These are technical warning signs that the share price is vulnerable to a change in direction.

We think the reasons for the company’s financial performance is quite clear. The chart below shows that farming has become less profitable. 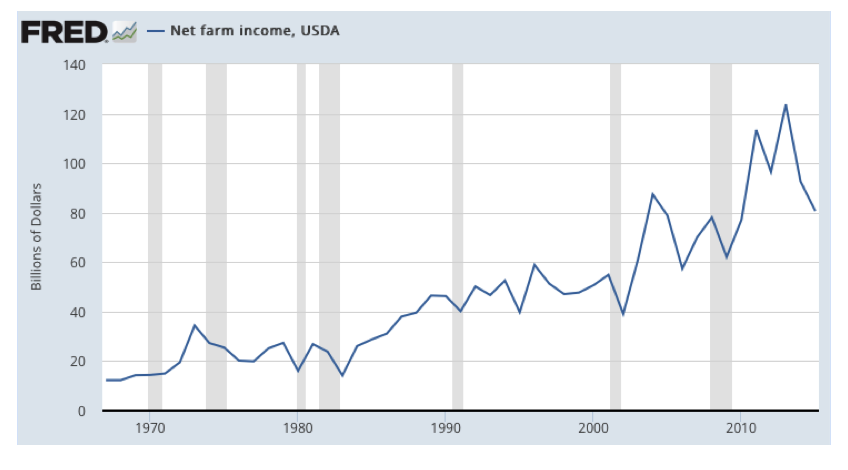 Farm income rose rapidly from 2000 to about 2014. This encourages farmers to buy and work more land. To do so, the farming industry took on more debt. The following chart shows that mortgage debt on farmland is at historically high levels. With profitability falling and more debt to service, farmers are cutting cost by using less fertilizer and planting less land, both of which hurt the margins and volumes of the farm suppliers. 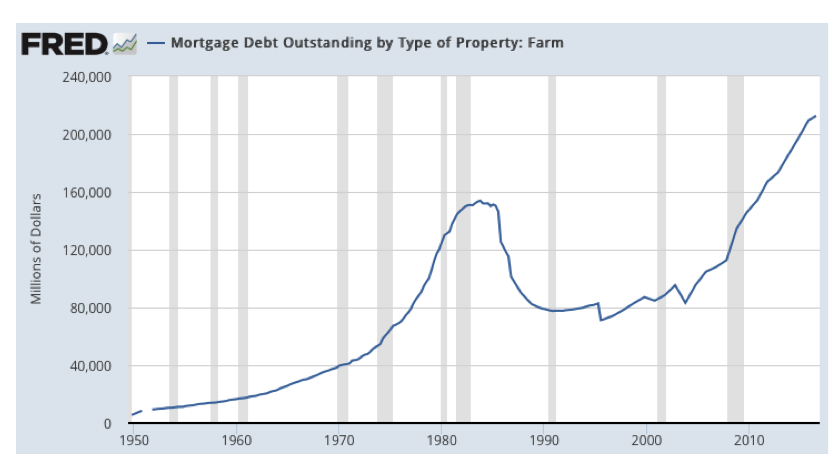 Valuation is supportive of the bearish case. The company’s shares trade at a PE multiple of about 37 based on the prior 12 months earnings. The company expects revenue to be flat or down in 2017. As a result, we do not see earnings growth in 2017, so the PE on a forward-looking basis is in the high 30s as well. In addition, EV/EBITDA is a lofty 13.3 given the lack of growth and continued industry headwinds.

While we think Mosaic is a great company, valuation leads us to believe the share price needs to come down. The technicals tell us that a selloff could begin at any time. To be fair, the short-term price trend has not rolled over just yet, so it make take some time before our anticipated selloff gets underway. If you agree with our bearish thesis, you might want to consider selling a call spread to capitalize on sideways a mild selloff or sideways price action. With the share trading at $32.39 would consider the following trade structure.

To initiate this trade, the investor will collect a nominal $104 up front per call spread. The breakeven level is $34.04, which is 6% above the current price. The efficient market hypothesis suggests there is a 64% chance of success on this trade. If our industry analysis, valuation, and interpretation of share price action are correct, we think the odds are on our side. 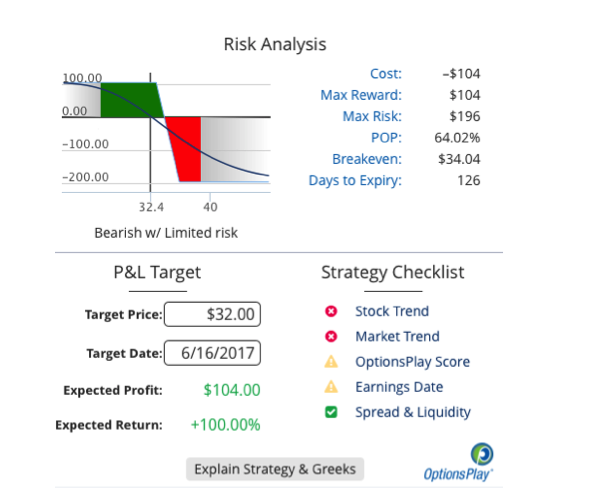