Monday morning I discussed a New York Post article suggesting Amazon.com was considering going far bigger into bricks and mortar grocery stores than what the company had previewed in December with their AmazonGo concept for clerk-less convenient stores (Do Amazon Dream of Electric Shoppers?). My immediate thought was that this could lead to some sort m&a among higher end grocery markets:

While investors might immediately think this could be the end of Whole Foods Markets (WFM) and smaller rivals like Sprouts Farmers Markets (SFM), it might make sense for AMZN to purchase the infrastructure and re-automate the stores in locations that consumers are already conditioned to go to.

For instance, SFM operates 220 stores in about a dozen states that include two of the most populous in the U.S. (California and Texas) ranging from 28,000 to 30,000 square feet, with 20,000 employees. The company has about $4 billion in annual sales, that grew 12% in 2016, down from 21% yoy growth in 2015. It’s not just Amazon coming for your grocery store, but big box retailers like Costco, Target and Walmart, and that’s really who Amazon is pitted against, not to mention Kroger that operates nearly 4,000 stores in 35 states nationwide, with $155 billion in trailing 12 month sales. So Amazon’s move has little to do with the likes of WFM or SFM as they have bigger fish to fry, but both will be swept up in the disruption, and one of the two could even be a means to an end for Amazon in their broader grocery battle.

.@nypost, whoever your anonymous sources are on this story https://t.co/VFyzGQcOAZ – they’ve mixed up their meds!

And on the NYPost article, if anybody knows how to get 20% margins in groceries, call me! 🙂

As for AMZN’s grocery plans, I suspect we will see something in between their Go format that the company teased, and what the New York Post projected.

Which brings me to WFM, which is scheduled to fiscal Q1 results tonight after the close. The options market is implying about a 6% one day earnings move tomorrow, which is rich to the average one move following the last 4 quarters, but shy of the 10 year average one day post earnings move of about 9%.

Aside from the poor price action, sentiment is downright horrible, Wall Street analysts hate the stock with only ^ buys, 15 Holds and 6 Sells, with an average 12 month price target of $29.80, 2% above where the stock is trading, with short interest close to 10%.

It’s entirely possible that the stock is putting in a base and is ready for a short squeeze if results and guidance are not as bad as expected. That would likely see the stock back to the December high near $33. But that’s a big if, and it makes sense to define risk rather than be long the stock if you are already long the stock or looking to play for a quick move higher:

Rationale:  $30 appears to be near term resistance, a break above on news could have the stock re-testing the Dec highs. If the stock fails here and breaks below support this trade is only risking .67 versus what could be a a couple of digits lower in the stock. 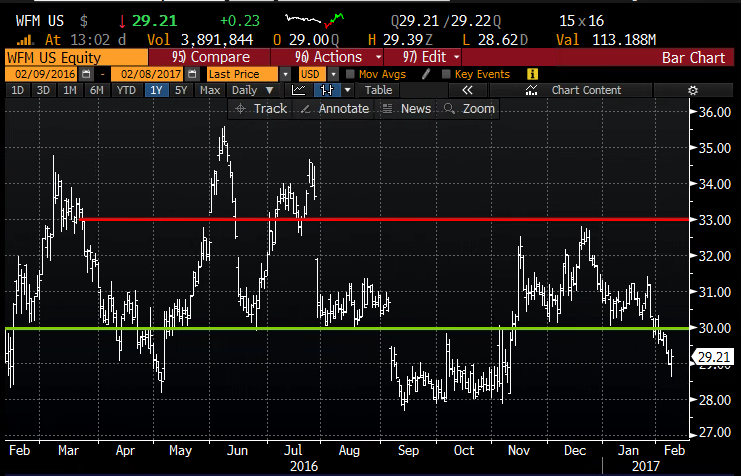 For those long the stock or looking for that breakdown, below massive long term support at $28, you might consider a longer dated put spread targeting a move back to the mid to low $20s:

Rationale: Without a meaningful guide up, or some sort of m&a discussed above this stock is likely to continue to grind lower, but in the event of a meaningful guide down, the stock could gap to new 52 week lows to the mid $20s. This trade works as both a hedge vs long stock or an outright bearish trade and has a few months to play out so doesn’t simply isolate earnings: 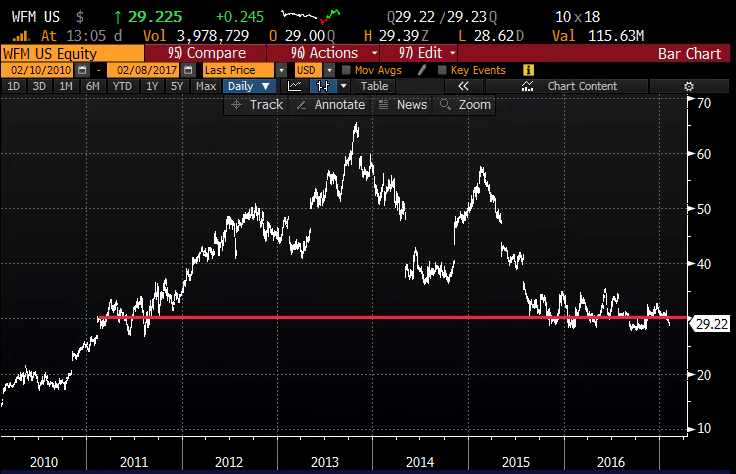