Gilead & The Art of Guidance

Yesterday after the close, Gilead Sciences (GILD) reported their financial results for the Q4-2016 and the year as a whole. This report was a classic good news / bad news story. The good news was GILD beat expectations. Analysts expected revenues of $6.720 billion and the company generated revenues of $7.320 billion for a 9% beat. EPS expectation was $2.23, and the company reported $2.34 for a 5% beat. The table below summarizes those results. Note that sales and profits are down from 2015 levels. Investors expected revenue challenges, as management warned that its Hep C drugs were in revenue decline. Falling revenue and profits are the reasons the stock was trading at a PE of 7 based on trailing earnings.

The bad news is that management cut guidance for 2017 far more than analysts as any of us at TheOptionsEdge.Com expected. We were looking for sales to be down 12% to 15% in 2017 as compared to 2016 on the existing portfolio of pharmaceutical treatments they currently sell. What caught the street and us by surprise was the 2017 guidance of a 23% drop in expected sales. Ouch! It turns out that the company’s Hepatitis C drugs are under more pricing pressure than we expected and patient demand is falling more than we would have thought as well. 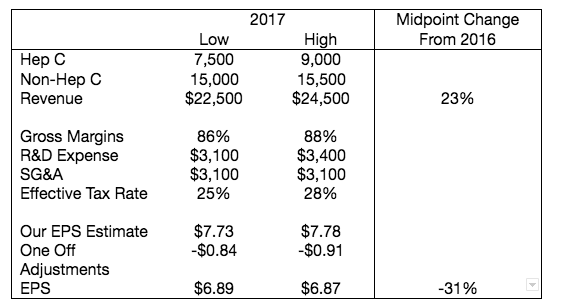 At first blush, this might look like a disaster, and it would be if the stock were trading at 25 times earnings going into this announcement. But since investors assumed slowing sales into their valuations, the stock was trading at 7 times earnings.

Needless to say, investors did not take this news well. The stock is trading around $66. The question is, “Is this smack down warranted?” We are not so sure. If the company indeed generates about $6.88 a share in 2017 as we estimate they will, the stock is trading about 10 times earnings. This is very cheap for a company that is net cash and one that should generate $12-14 billion in cash from operation. Longer term, the company has a number of drugs in the final phases of approval, which could stabilize total sales in years 2018 and beyond.

The company repurchases 123 million shares of stock for $11 billion in 2016 and paid a cash dividend of $2.5 billion. We expect the company to continue to repurchase shares throughout 2017 with some of its free cash flow that greatly exceeds its needs for R&D. Concurrent with yesterday’s earnings announcement the company announced that it would increase that dividend by 10% going forward as a signal of strong future free cash flow.

That is the bullish case for Gilead. The bearish cash is driven by uncertainty. “Where there is smoke, there is fire.” Under situations like this, many investors sell first and ask questions later. Investor expectation was for a fall in sales until the new drugs under development reach the market. Since the average analyst estimate of 2017 sales implied a fall by 13.4% to $26.3 billion, company guidance of a 23% drop comes as a shock. So investors rightly ask, “What could be next?” A wild card in this process is the potential changes in the Affordable Care Act. Politicians love to talk about the high price of pharmaceuticals, so this could be an area of concern.

Before you throw the baby out with the bath water, there is always the issue or investor expectation management. It is entirely possible that management considered every challenge in front of them when issuing guidance to the street. If the company incorporated all the potential bad news into revenue guidance, only good news and positive surprise remains. If this is the case, the trading we see over the next week or two could represent a panic low in the share price. If indeed all the weak hands sell, we could get a tradeable rally. We’ll be sure to update on the trade idea.