The predominant theme in the markets is the “reflation” trade. For those who have been living in a Scientology compound since November 2016, the reflation narrative goes something like this -> the global economy was improving before the election; Trumponomics (infrastructure spending and tax cuts) will be supportive of a strong economy; asset prices will move higher as the US economy grows at 4%+. BUT…if oil breaks $50, the reflation narrative could fail.

BK has argued that due to the Saudi Aramco IPO, Saudi Arabia has a vested interest in keeping the price of oil high enough to support a strong valuation, but not too high as cause another US shale led supply response. So far the line in the sand appears to be ~$50.

While $50 is might be critical for those who like nice round numbers, the uptrend from the 52 week and multi-year lows shows decent near term support near $48ish:

BK got me looking at crude this morning. That then lead me to the looking at the U.S. dollar (DXY) which is trying to stabilize after a 3.5% drop from its multi-year highs made early this year. Obviously, the inverse relationship of the U.S dollar and oil is on oil traders’ minds. The commodity started its collapse in late 2014 when the it became clear that the Fed was going to taper bond purchases. That in effect started the DXY’s epic 9 month run into early 2015, and remained bid as the Fed ended ZIRP:

Which brings me to the XOP, the S&P Oil & Gas etf, that is a fairly equal weighted index which saw put volume 1.5x that of calls today.  The largest options trade of the day in the XOP was a buy of 5,000 of the Feb 17th 39.50 calls for 31 cents. These calls were bought shortly after the open today when the etf was trading near its lows at $38.38. These calls appear to be a trader’s attempt to play for a very near term bounce in oil stocks: 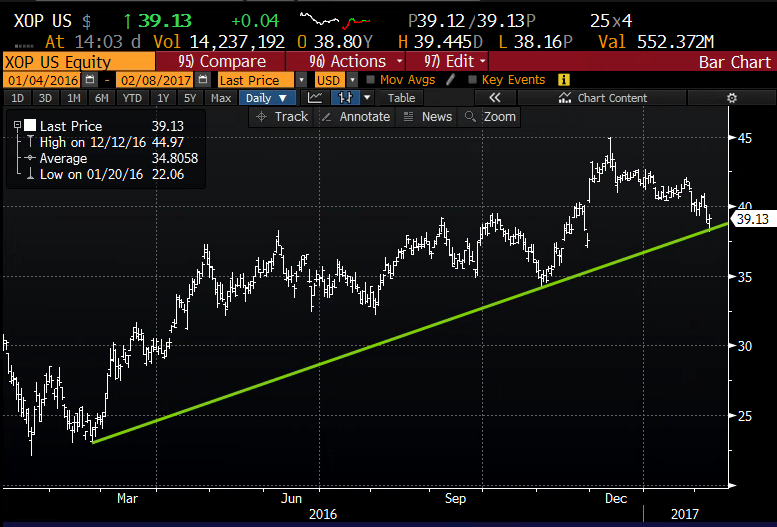 The very near term bounce part is key. If XOP is below 39.50 on next Friday’s expiration, these calls expire worthless. They breakeven at 39.81. Since the purchase this morning the etf is higher by nearly a dollar, possible even affected by the big call buy itself. The calls, bought for .31, could could now be sold at .51. That’s not bad work if you can get it. But those gains are still out of the money. If the etf goes sideways or down fro here those calls decay to nothing. It will be interesting if we see a quick exit on this call buy.