Nvidia (NVDA) was the best performing stock in the S&P 500 (SPX) in 2016, rising 250%, in what felt like a straight line. That straight line continued until December 28th when the stock reversed, embarking on a 4 day reversal of almost 20%. It seemed like the fever had broken. It hasn’t. As I write the stock is now back at its previous all time high: 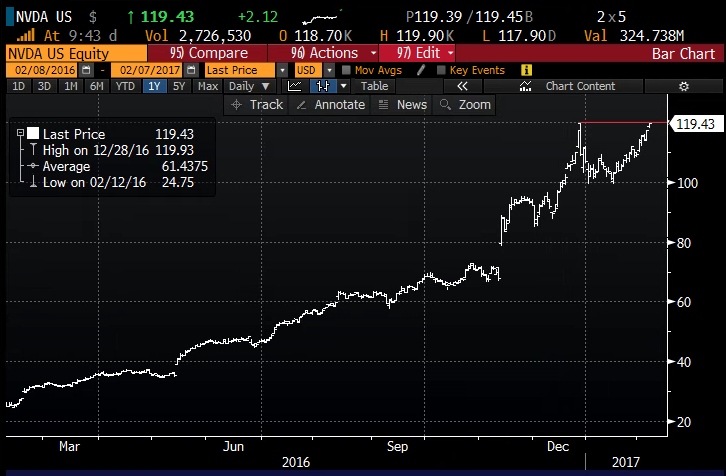 It’s starting to feel like we’re getting ready to embark on the animal spirits phase of the rally with emotion doing the stock picking. There is a fairly interesting push and pull going on in the SPX’s mega-cap tech heavy weights, with stocks like NVDA, Netflix (NFLX) maintaining all time highs, while the bulk of so called FANG stocks (ex Netflix) pulled back immediately following their Q4 results over the last week and a half. All three (Alphabet-GOOGL, Amazon-AMZN & Facebook-FB) were rejected at prior all time highs from the fall prior to Q3 results: 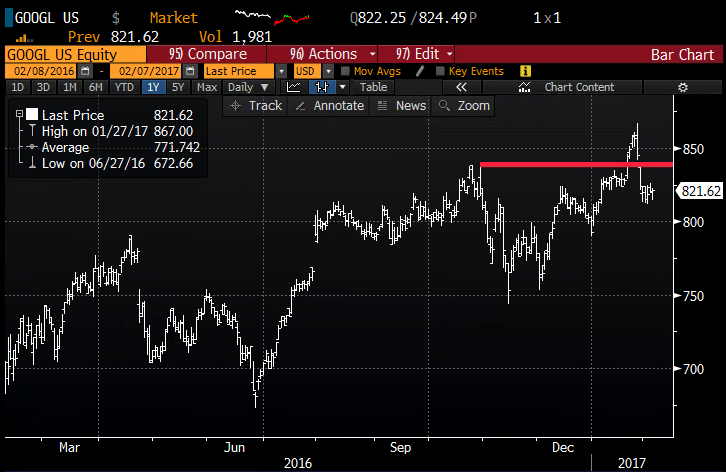 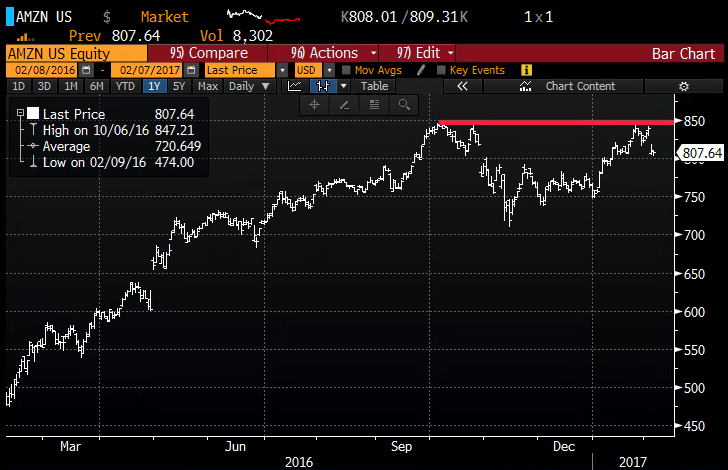 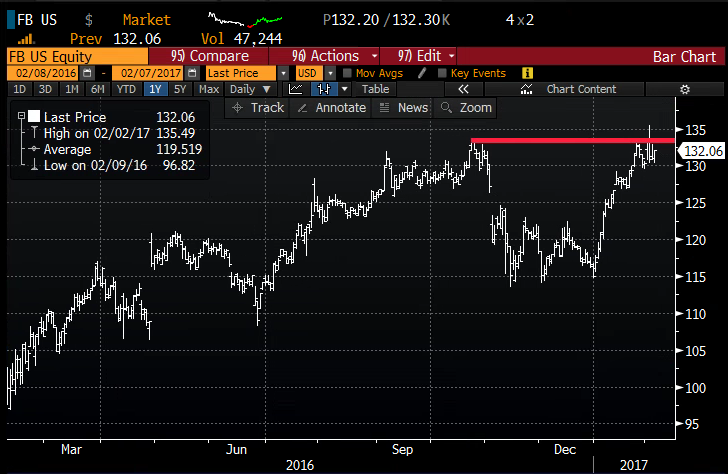 Is this to suggest that three of the largest stocks in the market just put in epic double tops?

I have no idea, but watching how these stocks act as they approach the prior highs, and any news that cause them to consolidate or pullback or break out above the recent rejections will be worth keeping an eye on. Especially at a time where Apple (AAPL), the big-daddy of them all, quickly approaches its prior all time highs. Will the other three gives us AAPL clues?

The SPX’s breakout about 2200, and the consolidation since early December is impressive. But that consolidation has come with increasingly bullish market sentiment, highlighted by an extremely complacent VIX reading of 11.24!

You’ll hear the VIX talked about in financial media as if it’s forward looking. The VIX futures are somewhat forward looking, but in the same way your Roomba is forward looking. It’s not really “thinking”, it’s simply protecting itself from potential obstacles it could face in the future. When the VIX is low, its futures curve is equally as dumb, basically bending towards the historical mean and flattening as it gets close to that mean. Rarely do you see VIX futures ever reflect any sort of human uncertainty of future events, at least in any significant way. The biggest factor for where the VIX futures are trading is the spot VIX itself. A historically low spot VIX isn’t reflecting “market sentiment” as much as it’s reflecting how realized vol in the market has come to a standstill and premium decay is killing those that are long it. That has a snowball effect as traders and investors dump protection rather than watch it decay to zero. That painful process can last a long time, but it reflects nothing going on under the hood in the market. The sector rotations we’ve seen since the election could be the new normal. Or we could see another shift soon. What will not continue as the new normal is all of it essentially cancelling each-other, flat-lining the SPX and burying the VIX.