We like to take about opportunities wherever we can find them. On 19-January-2017 we discussed the precious metals market. In that note we showed that platinum is trading at a historical discount to gold. Ee believe the price relationship between gold and platinum will eventually revert to the mean. When this happens, platinum will significantly outperform gold.

Since platinum had broken out of its bearish trading pattern, we thought it looked like an intriguing opportunity to play from the long side. At the same time, gold and silver were still trading within their contained down trend channels, while threatening to breakout out above it. A breakout has now occurred in silver putting both gold and silver on our radar screen. At this point in time, we prefer the opportunity in silver, and will discuss it more fully.

We do not suggest the typical retail investor trade commodities futures and options. But that does not mean they cannot take a position in the commodities markets. Fortunately, commodities have been “equitized” through the creation of ETFs. A number of ETFs have been created for trading silver. We like the iShares Silver Trust (SLV), as a trading vehicle as it is the largest and most liquid of the silver ETFs.

There are fundamental reasons that support the bullish case for silver. It has a host of industrial uses that depletes supply. Sad to say, but only about 20% of silver is recycled, due to its low price. Most people are not aware that silver is used in the production of solar panels. They are the primary metal that makes up those little metallic lines on the solar cells. A typical solar panel uses 20 grams (0.7 ounces) of silver. 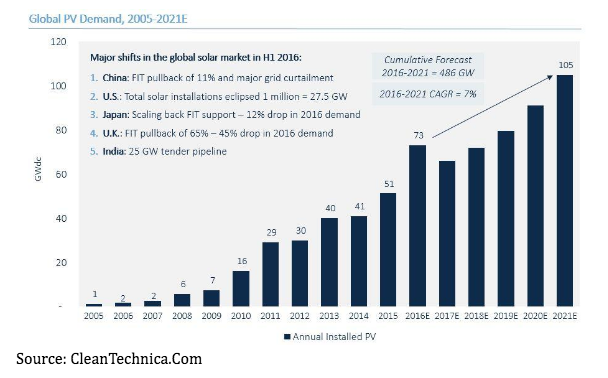 The chart above shows the growth curve of global solar power installations. If you assume there were 73 Giga-watts of capacity installed in 2016 and the typical panel generates 350 watts, then we estimate that there were about 210 million solar panels installed in the alone, consuming 146 million ounces of silver. This represents 18% of total mine supply of 800 million (Silver Institute 2015). There are many other uses of silver. It is heavily used in electronics, as it is a great conductor of both heat and electricity. Its use in the medicine is growing very rapidly as well. Collectors buy silver coins from mints around the world, and investors hold silver as a hedge against inflation.

All in all, we like the fundamentals of silver, but at the same time our approach to investing demands we wait for evidence that price is moving in a manner consistent with our interpretation of the fundamentals. Doing otherwise we increase the risk of being wrong or too early. We think a bullish could be happening now. 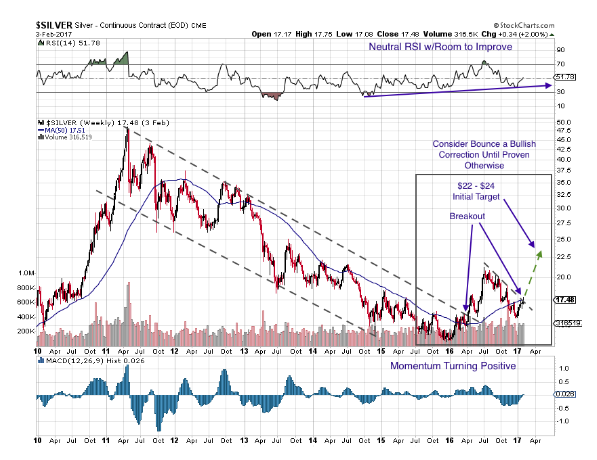 The larger question at this stage concerns the size of the expected move. Is this a 3-wave (up-down-up) correction to the previous 5-year bear move? If it is, we should expect a limited price move into the low 20s. If this corrective rally is characterized with multiple overlapping waves that last a few years, we could see price stretch into the 30s. We suspect this will frustrate both the bulls and the bears. The alternative is that the secular bear market in silver is over. If this is the case, we should see large, bullish, impulsive move that eventually takes the price of silver over $50 an ounce. We do not see evidence of the latter scenario yet. As a result, we are working under the assumption that this rally is just a correction in a longer-term bear market.

For those that agree with our fundamental and technical thesis supporting the bullish case, there are a few ways an investor can play it. One can simply go down to their precious metals dealer and buy some physical silver. We would consider this if we thought a secular bull market is underway. If you think this is a trading rally, then one could buy shares in SLV, the silver ETF. This approach has the advantage of convenience, and low transactions costs. If you prefer a stock replacement strategy, you might consider a bullish risk-reversal. With SLV trading at $16.69, consider the following structure.

Mark to Market prior to May Expiration: this position will have gains as the etf rallies towards the long call strike, and have losses as it declines closer to the short put strike. 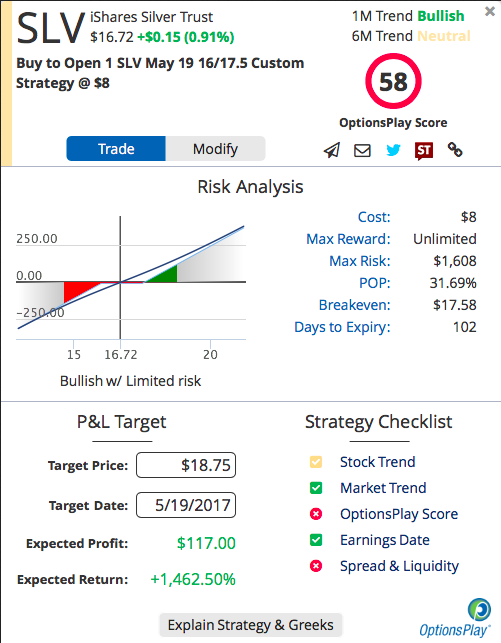 Rationale: With this structure, the investors will pay a nominal $8 in premium up front per risk-reversal. The breakeven level is $17.58, which just 5.0% above the current share price. A random walk suggests there is a 32% chance this trade will be successful. The advantage of this structure is that it will outperform a long position in SLV in a downside scenario, as one would not have to take ownership until the price of SLV fell below $16.00, which is 4.3% below the current price.