Shares of Apple (AAPL) are trading at levels not seen since mid 2015 ($127ish as I write) this morning after reporting fQ1 results last night that mildly beat expectations despite offering revenue guidance for the current quarter that was 2.5% below consensus at its mid-point. There’s not much to poke holes at, especially given the company’s balance sheet, their commitment to capital return, the stock’s valuation and the building anticipation for a massive iPhone upgrade cycle coming in the Fall with the introduction of the 10th anniversary iPhone. At this point the stock looks poised to at least kiss the prior all time high from April 2015 near $134.50:

While the investment world is rejoicing about AAPL, I thought I’d offer a few areas for disciplined bulls to keep an eye on.

With iPhone representing 70% of the company’s trailing 12 month sales of $215 billion, it is imperative that the company comes up with a hit product (or grouping of products) that leverages off of its hardware installed base of over 1 billion iOS devices to offset what is certain to be a gross margin decline as the company next geographic growth opportunities lies in counties like India, where an iPhone can cost up to 25% of annual household income.The developed world smartphone saturation rate is asymptotic at this point while upgrade cycles continue to extend due to lack of innovation. And even in emerging markets like India which can continue to ramp sharply, will come at far lower profitability margin than previous entries in the developing world. Which brings me to services. Management highlighted the 18% year over year sales growth in Services, up 13% sequentially, and the fact that their Services revenue in 2017 will be the size of a Fortune 100 company. I would add that while Services was the only product segment that grew double digits in the quarter, the growth rate decelerated from 24% year over year in the prior quarter… and the percentage of the whole dropped from 13% in fQ4 to 9% in Q1 2017.

The sequential increase was certainly impressive as Tim Cook added that the “App Store customers broke all-time records during the holiday quarter, including $3 billion in purchases in December alone, making it the App Store’s single best month ever”, but I guess we will see just how influential the Holiday selling season was for this sequential increase. With an installed base the size of AAPL’s it’s embarrassing that Apple Music only has about 50% of the paid subscribers of Spotify.

And if we’re looking ahead to Voice as the “next big platform”. How did AAPL lose the lead to their arch enemies Amazon and Google? They launched Siri in 2011 with the freaking iPhone 4s and yet Alexa from Amazon seems to be the version of Voice Artificial Intelligence taking over people’s homes:

The company has the best selling smartwatch on the planet, but despite being a multi-billion hit that most electronics companies would kill for (and it is actually killing JawBone and FitBit) it does not move the needle for a company with a $200 billion plus revenue base. The Airpods could be a hit, I have bought two and I love them, but they are still supply constrained. So the jury is still out on their wearables strategy, as investors will be eager to see introduction of AR & VR, areas that Microsoft, Samsung, Google, Snapchat and Facebook appear focused on.

Since Steve Jobs’ return to Apple in 1997, the stock has been heavily dependent on a hit parade of new innovative products, and the expansion of its ecosystem. It started with the iMac, then the iPod in 2001, iTunes Store in 2003, iPhone in 2007, iPad in 2010. The only thing we’ve see since the iPad was Watch in 2015. So Apple will need another hardware product hit soon (wearable, connected home), or platform (voice, ai, auto), or services to keep that trend going. Geographic expansion, like the ramp we saw in China in the last 5 years is likely the next leg of growth, but Cook’s response to a question on the conference call last night about India, appeared to be a little bit of a push out regarding the timing of the opportunity:

That’s a really good question. Despite the demonetization move in India that created lots of economic pressure there last quarter, despite that, we had all-time record revenue results, and so we were very happy about that. The demonetization impact has not worked its way through yet. It’s still definitely having some overhang. But I think in the longer term, it’s a great move, and I feel really good about how we’re doing there. We are in discussions on a number of things, including retail stores, and fully intend to invest significantly in the country and believe it’s a great place to be

These are longer term trends facing the stock. But there is certainly no reason to run for the hills in this report itself. They did not disappoint and offered muted guidance that they might be able to meet in the coming months with the prospect of tax repatriation and a significant increase to their already massive cash return. 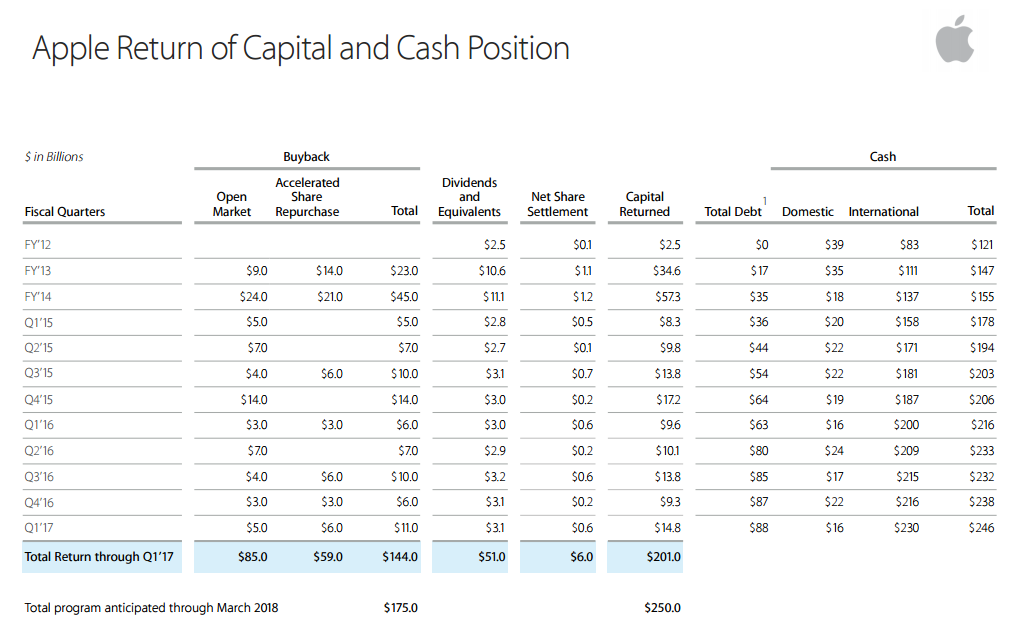 Over the last month we have offered up a couple long stock alternatives (here) and yesterday a defined risk short into the print (here), we will update both soon.