Event: Apple (AAPL) will report their fiscal Q1 earnings today after the close. The options market is implying about a 3.5% one day move following results, as the Feb 3rd 121 weekly straddle (the call premium + the put premium vs stock $121) is offered at $4,40, or $3.6% of the stock price. That is the implied movement between now and this Friday’s close, most of that move is being priced for the earnings event. If you thought the implied move was priced too cheaply, and bought the atm straddle, you would need a rally above $125.40, or a decline $116.60 to make money.  The average one day post earnings move over the last 4 quarters has been about 5.4% with three of those lower and one higher, while the 10 year one day post earnings average move has been about 4.8%.

Price Action / Techncials: AAPL’s ytd gains of 4.25% has mildly out-performed the Nasdaq’s 3.75% gains, while nearly triple the 1.5% ytd gains of the S&P 500 (SPX). As the largest component of both indices, this out-performance is important to consider when gauging the breadth of the recent rally.

As for the chart, I am gonna get a little line-tastic here. I see three levels, with the stock just above $120, which had served as resistance and could be support or a pin. On the upside, the prior high near $134 is an obvious target, especially when the you consider most major U.S. indices are just off all time highs, and $110 seems like reasonable near term technical support if the stock were to pull back lower:

As for the quarter, i suspect they come close to their guidance they gave in late October, that at the time was below consensus, but it’s the Q2 guidance that the stock will trade on. Back on Jan 4 (Apple Core) I had the following to say on the upcoming print:

Per usual this time of year there have been rumors of AAPL scaling back iPhone production of the current quarter,. which makes sense 3 and half months after the iPhone 7’s release, and shortly after their bulked up holiday selling season. But before anyone gets too geeked up about the innovation demonstrated in the Airpods and the prospects for a new Watch in April, it’s important to note that those two products fall in the Other Products category in AAPL’s product revenues, and in fQ4, that group accounted for 5% of the company’s total sales (highlighted, does not move the needle): 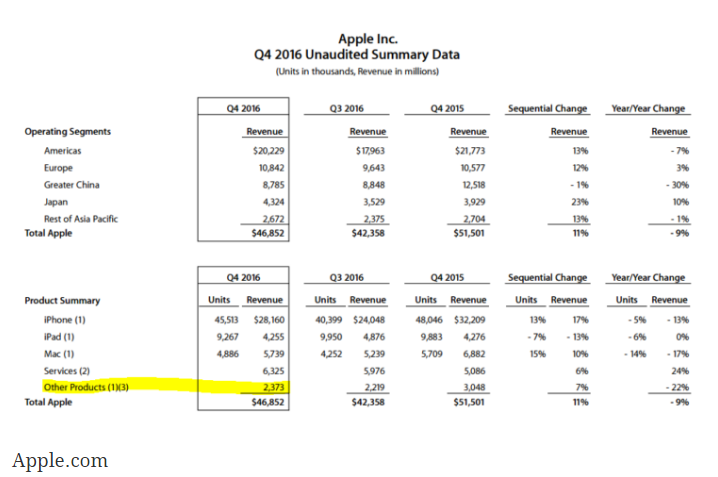 I suspect the company meets fQ4 when they report, but likely guides down for fQ2. Partially a result of a holiday hangover, but also the strength of the U.S. dollar since they guided. The DXY is up nearly 5% since Oct 25th, the company gets about 55% of its sales from outside the U.S. and the dollar could be a headwind to guidance. Oh, and the bump the company might have gotten from Samsung’s Galaxy Note 7 disaster might abate and iPhone users might start to push-out upgrades as rumors of the impending 10 year anniversary iPhone start dominate the tech news flow. Lastly, those expecting a dramatic increase in the company’s capital return will not get any meaningful news until there is some clarity on overseas cash repatriation, which will likely take months, and the company historically does not update their cash return until March/April following their annual shareholder meeting.

At the time, when the stock was $116 we leaned towards defined risk strategies for those looking to play for a post earnings move back towards the prior highs, and with the stock 5% higher I would be inclined to roll up this view if still bullish.

You know the drill, the stock trades 13.6x expected f2017 eps growth of 7% on a 5% expected sales increase. Ex their $150 billion in net cash, AAPL trades about 11x. Cheap as chips with nearly 2% annual dividend yield, tens of billions of expected share buybacks this year. It’s hard to find too many things to knock. But the real issue is that the next two quarters could see tepid iPhone upgrades amidst the third year of the same form factor of the iPhone, and ahead of what most Apple viewers see as the more significant upgrade cycle for this fall’s 10 year anniversary iPhone, which should have a completely new design. I suspect with meh MacBook upgrades, no new iMacs in 2 years, iPad sales banging along the bottom, the Watch in a sort of wearable purgatory and Services the only segment to have grown in the last quarter (but at just 13.5% of the total) there’s little to get excited about over the next 6 months for investors.

So what’s the trade? On a couple of occasions in the last month we have detailed long stock alternatives (on CNBC’s Options Action on Dec 30th, and on the site Jan 4th here). Those have worked well. But after the run higher, the possibility of a pullback exists following earnings.

So for those considering a pull back in the stock on weak forward guidance, February put spreads look attractive:

Rationale: risking less than 2% for a break-even down 2.5% on a trade that offers the potential for a 4 to 1 max payout into an event. And one the options market might be under-pricing after a nearly 12% rally since early December.

I’ll offer our usual disclaimer for long premium directional trades into events. You need to get a lot of things right to merely break-even, most importantly direction, and magnitude of the move. This trade is binary and if AAPL were to go significantly higher on the results this trade would be essentially worthless. When it comes to trades like this we risk what we are willing to lose vs the potential reward if the stock declines.