Discovery Communications Inc., (DISCA) is a company we all know, but one that rarely shows up on the average investor’s radar screen. DISCA is a global media company that owns and operates various TV networks under the Discovery Channel, TLC, Animal Plant, Science, Oprah Winfrey Network and many other brands. The company is our definition of a steady financial performer. The company consistently generates a profit of about $200 to $300 million, quarter in, quarter out on revenues of about $1.6 billion ($6.4 Billion annual).

As the chart below shows, the stock ripped higher after the financial crisis. Curiously, it bottomed in October of 2008, about 5 months before the market as a whole. The stock was a huge performing delivering an 8+ bagger to anyone who bought near the bottom and held to the end of 2013. Since the peak, investors who held the stock have “suffered death by 1,000 cuts.” A casual observer of this chart might conclude that the company is having some trouble. A closer look at the financial reveals a company that generates $1 billion in free cash flow per year after CapEx, which they use to repurchase stock. 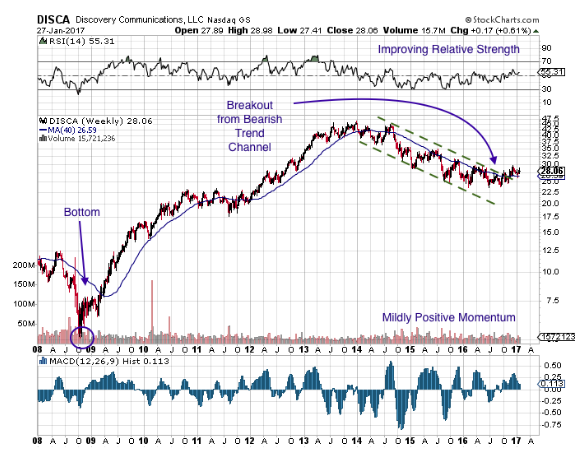 Valuation metrics suggest this is a cheap stock, compared to the median stock in the S&P500. The stock is trading at a PE of 16 based on trailing earnings and about 13 based on analyst’s expectation of next year’s earnings. EV/EBITDA is a modest 8 and the company generates a healthy 8.3% return on assets and 20% return on book equity. Steady cash flow generation after CapEx at a reasonable price tells us the stock is cheap and if one holds the stock long enough, high returns will be had sometime in the future..

The company will be reporting their financial performance on or about 14-February-2017. We expect the company will report EPS of $0.45 to $0.50 a share, which is consistent to analyst’s expectation. If you agree with our thesis, you might consider purchasing the shares. If you think the shares might consolidate or fall a bit before rising further, you might want to consider selling cash covered puts. With this strategy, the investor will enjoy a gain if the share price moves higher or stagnates. If the shares move lower, the investor will pick-up shares at a discount to today’s price. The only down side is that the investor will miss out on large gains should the share price rip higher. With the stock trading at $28.06, the following structure fits the bill: 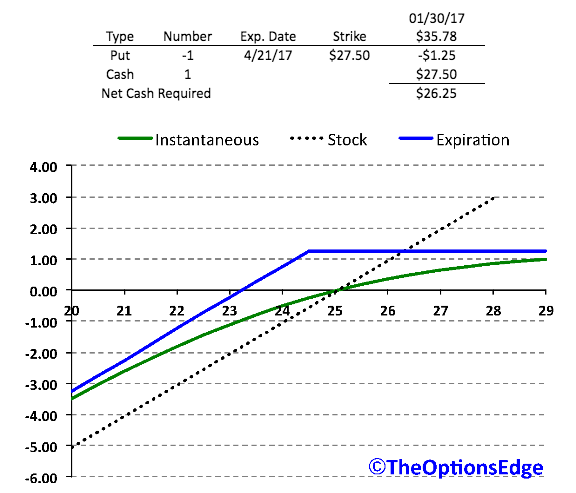 Since the investor is short a put with this structure, there is the possibility that the share price falls and the stock is assigned. To cover this possibility, the investor needs to have cash equal to the strike price of the put or $2,750 per option in their account to pay for the stock. The investor will collect $1.25 when they sell the put, so they will need another $2,625 in capital. The break-even level on this trade is $26.25, which is 6.5% below the current price of the stock. Since the put we are selling is out of the money, the probability of success over the 81-day time horizon is 65%. Since the upside is limited with this structure, one can think of it as a yield strategy. If the options expire worthless and the stock is not assigned, the investor earns an annualized yield of about 12%. For those where a short put alone is too much risk or margin, it can be turned into a short put spread by buying a lower put strike in April.