I know where I was 10 years ago today. I was watching a Ustream live video of Steve Jobs’ introduction of the first iPhone.

While Jobs claimed that the device was magical and revolutionary, to some like myself, assumed it would just be an improvement on the half dozen smartphones I had used in the prior few years (iPaq, Palm Treo, Nokia 9300, Sony Ericsson P800 & P900, Moto Q and Blackberry Pearl). Obviously it was a massive improvement, largely on the back of the app store and the possibilities of geo-location. All of the smartphones before basically did one thing well and that was make calls, with some internet access of mobile sites. They basically pretended at all the other promises.

Jobs sold the iPhone as not only the best phone, but also incorporating what was already the best music device with the iPod, as well as a new way to access the internet based apps submitted to the app store ecosystem integrating with the native functions of the phone, rather than simply a browser to mobile versions of existing sites. The app store democratized mobile away from the carriers. In the years to come it fulfilled all of Jobs’ promises. Since the first version, most of the advances have been software and app related, while hardware improvements have been evolutionary. The iPhone is still the best high end smartphone on the market, as it was when it went on sale in late June 2007. I have owned every iPhone since the first one and still have them all. I broke my original iPhone out today for the momentous anniversary. There is little doubt this device changed the course of technology: 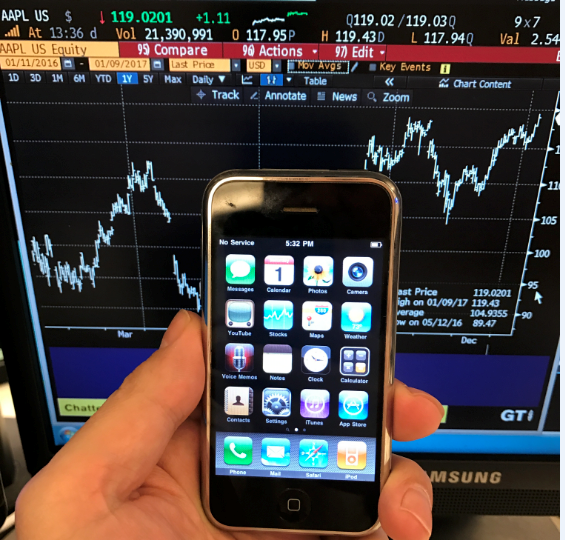 On Jan 9th 2007, the day of the reveal, shares of AAPL closed at $13.25, up 8.5% from the prior day. But by the end of January, the stock had given back all of the initial iPhone announcement gains:

AAPL is up nearly 1000% from the start of 2007! But what’s more astounding is that its $626 billion market capitalization (making it the most valuable company in the world) doesn’t include the close to $200 billion the company has returned to shareholders through share buybacks and dividends:

Now back to the present. Shares of AAPL are making a new 52 week high today and call volume is running more than 2x that of puts with the two most active strikes the Jan 13th weekly and Jan 20 regular 120 calls, with more than 30,000 of each trading as I write. This is likely short term momentum traders as the next identifiable catalyst on Jan 31st with their fiscal Q1 earnings report. The options market is currently implying about a 5% move in either direction between now and Feb 3rd weekly expiration, a tad below the 4 qtr one day average post earnings move and a tad above the 10 year average one day post earnings move of 4.8%.

As for the charts today, $120 is a fairly obvious two year resistance level, with an air-pocket above back towards the all time highs made in May of 2015:

For those of you who have iPhone on the brain when it comes to AAPL, I think it makes sense to consider an ecosystem in the future that is run off of voice and AI platforms where AAPL may have to play some serious catch up to rivals like Alphabet and Amazon. Great read from the WSJ:

Why Apple’s critics are right this time https://t.co/2R21XGgSIF via @WSJ pic.twitter.com/crrg6weqNp

Last week we detailed a long stock alternative in AAPL shares when the stock was a few dollars lower. The idea, which was a call spread risk reversal positions for a breakout above 120 in the stock, without having a ton of risk unless (it cost .75 at the time) unless the stock retreated below 105, where you would be put the stock. That trade idea is now worth about $2.15 and is set-up well if iPhone anniversary fever gets people nostalgic for the stock.