This morning I had some thoughts on interest rates (MorningWord 9/14/16: Basket of Predictables). To recap, I don’t think they are going meaningfully higher anytime soon. Maybe we get back to 2.25% in the 10 year Treasury, if the Fed were to raise in Dec, and suggest a tightening path for 2017 (as they did for 2016 in late 2015), but I’d be shocked to see them much above 2.5% any time soon. Here was some fairly pedestrian charting of the 10 year yield,

Oh, and for those who think there is an imminent threat of higher rates because of what some like Doug Kass are calling a “generational low” in rates? (see Doug’s latest at the bottom on his view on rates, which has little to nothing to do with charts) They’re probably looking at these two charts of the 10 year U.S. Treasury Yield, the first showing break of 1 year downtrend:

And this, that generational double bottom:

But I will remind those that do see a generational bottom that the trend that is not likely to be broken in a major way in the sort term. Given the fragility of the global economy and the uncertainty of the nation politically:

Again this simple charting is just that. It does not account for the potential of structural shifts in crisis monetary policy that in the last few years, merely turned into policy. But again, the key word there is potential as I would argue that at this late stage of the economic recovery we better see a meaningful pickup in growth for rates to go higher.Speaking of rates, options activity on the TLT, (the iShares 30 year Treasury etf) ran hot, nearly 3x that of calls.  The two most active strikes were both puts. First it appears that 10,000 of the Sept 30th quarterly 137 puts were sold to close at $3.03 when the etf was just below $135.  And then later in the day when the etf was lower at $134.30 there was an opening buyer of 7500 of the Nov 130 puts for $1.68 (10,000 traded on the day).  Maybe this is the same trader, but the choice of the 130 strike is interesting as it’s a nice round number that the etf banged around from February to May before the June breakout to all time highs:

If that’s a hedge or an outright bearish bet is unclear, but the new Nov puts establish either a bet or protection that catches 2 FOMC meetings.

I suspect that the 10-year U.S. Treasury yield’s reversal over the past week out of its recent 1.5%-1.6% band is partly responsible for stocks’ recent weakness. After all, the correlation between stocks and bonds has been clear since early this year. Here’s a chart of the 30-year Treasury yield: 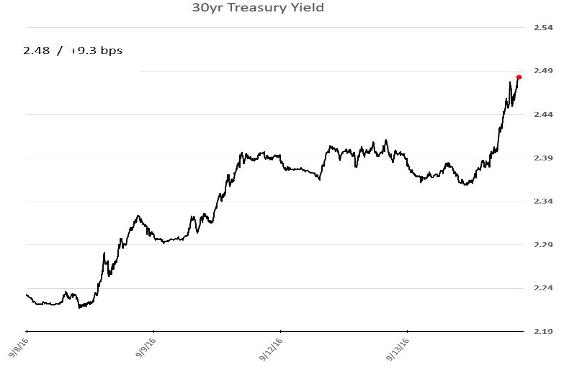 That said, the value of owning global fixed income as a hedge against stocks is subject to debate these days, as markets have begun to question the negative Treasury term premium: 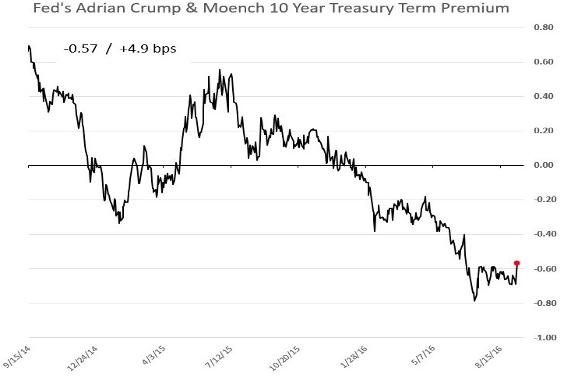 Always remember that stock prices ultimately key off of the risk free rate of return — i.e., the 10-year Treasury yield, which is now rising. So, history tells us that stock valuations should contract as interest rates rise.

This effect is only being exacerbated by a weak real global economy, in which central bankers have lost their effectiveness as fiscal inertia thrives (especially in Washington, D.C.).

The Bottom LineTwo of the most important reasons that I see for the market indigestion that began last Friday are the global bond market’s speculative unwind and the disproportionate role of volatility-trending and risk-parity quant strategies in stocks.

I personally believe that this indigestion and the associated volatility will likely continue over the next few months, so I’m starting the day at about a market-neutral position. I’ve also substantially reduced my value at risk (or “VAR”).

I plan to emphasize opportunistic trading rather than buy-and-hold strategies over 2016’s balance — although that’s not to say that I won’t have my eye on positioning for longer-term investing opportunities as they arise.