In the long run, equities are the best investment.  That market adage has held true in the U.S. for the past century, as the U.S. stock market has offered positive returns on almost every rolling 20 year period.  But the U.S. is actually a special case in this regard.

The passive vs. active debate has heated up in the past week, with Cullen Roche’s interesting response to what he viewed as an overreach on the part of passive investing enthusiasts.  The benefit of passive investing is to protect many investors from their own bad behavior.  However, there are many assumptions implicit in a passive strategy, including its historical foundation in the U.S.  Cam Hui had a terrific post last week discussing the impact of war and conflict on equity returns around the world in the past 100 years.  Here was the meat:

When investment professionals study past returns to determine future risk and return expectations, they often focus on US assets. As per the Credit Suisse Global Investment Yearbook 2014, here is a typical chart of US asset return considered by planners: 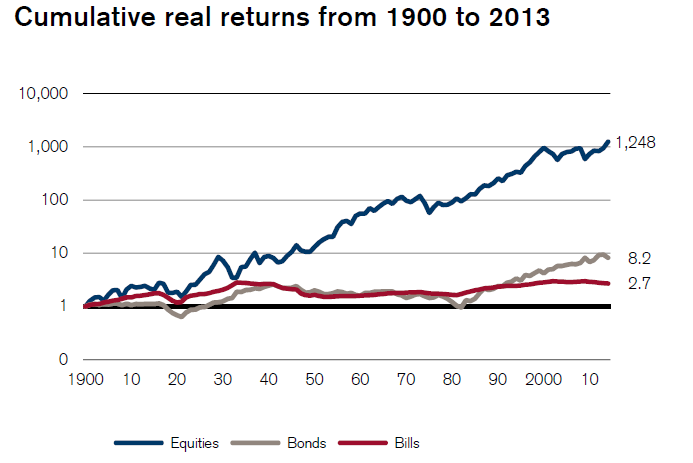 A survivorship bias problem
There are a number of serious problems with this analysis. First, it ignores the risk of confiscation and conflict. The above chart suffers from a severe case of survivorship bias. CS shows this chart of capitalization weights of global equity markets in 1899: 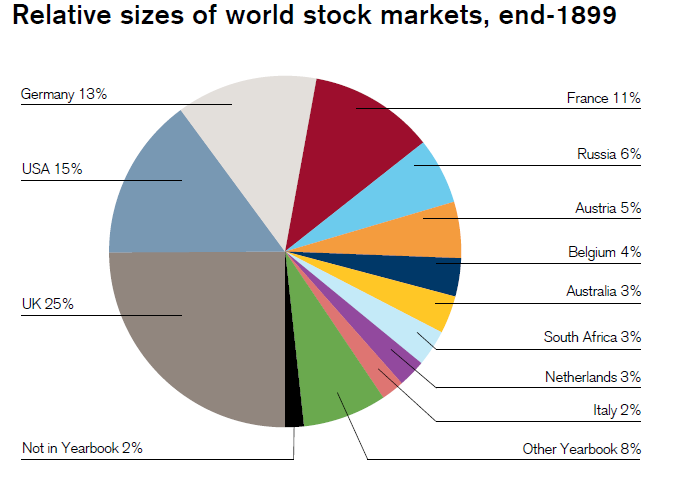 Here is the same pie chart in in 2013. The US went from a 15% market cap weight in 1899 to an astounding 48% in 2013. The UK market, which represented one of the dominant political powers of the early 20th Century, shrank from a 25% weight to 8% in 2013, France, another Great Power, went from 11% to 4%. Notwithstanding the fact that most investors invested in the bond market at the turn of the 20th Century instead of stocks, trying to project returns based on the US experience is like projecting returns based on AAPL`s returns since its 1980 IPO. 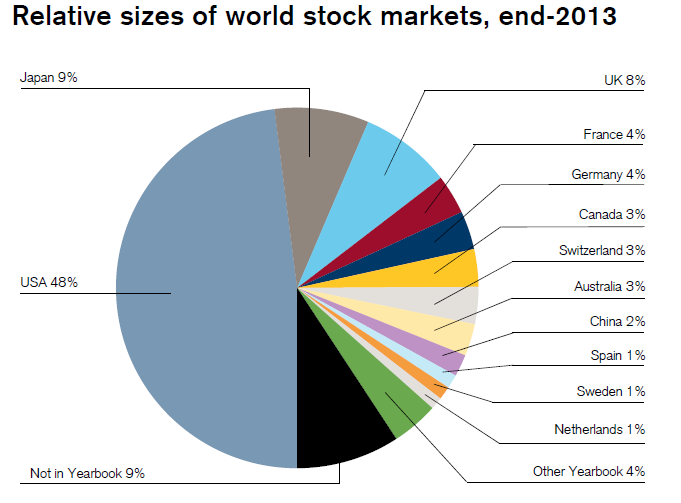 The US was still a promising emerging market country, as was Argentina (how did those Argentine railway bonds work out?).

Investment advisors in countries other than the U.S. have a much harder time making the long-term case for stocks given that the long-term data doesn’t offer the huge upside that has been characteristic in the U.S.  Of course, some very good reasons exist for the American outperformance.  The United States still has numerous structural advantages, such as a well-protected geographic position, well established legal standards and protections for investors, the largest economy in the world, the largest military in the world, etc., etc. However, Cam Hui’s point still stands – the long-term buy and hold argument is a bet on peace and continued U.S. unilateralism across the world.
I made a very similar point in my first post for RiskReversal in May 2012:

I took my fair share of economics courses in college, for better or for worse.  In a macroeconomics textbook, one table about global stock markets caught my eye back then, and I’ve thought about it ever since.  It showed the performance of stock markets around the world in the 20th century.  The U.S. was by far the clear winner, but many other markets (like Russia and Italy) had annual performance of less than 2%.  I started trading stocks in high school, and had read plenty of books and research about the long-term advantage of investing in stocks by that point, and the large majority of them used the period of (1929-present) in the U.S. as the time and place of study.  Part of that was due to data availability, and also the fact that financial companies funded a good portion of finance research, but it was still a huge selection bias.  It hit me that all of that research was based on a 75-year period of exceptional performance in the best stock market in the world!

American investors have benefited from a virtuous cycle of decades of outperformance.  As a result, Americans are more willing to invest in companies, take risk, and fund innovation.  Part of the reason why Silicon Valley is so hard to duplicate is that the Valley’s willingness to take on risk and invest in companies with no sales and earnings is found almost nowhere else on Earth.  While most startups still fail (and most stocks actually eventually go to 0), American investors are comfortable with playing for the winners since the surviving winners have been so successful.  Nearly half of Americans own stock, while only around 20% of Europeans have ownership in shares.  The figure is even lower in emerging markets, where real estate remains the preferred investment vehicle.
The favorable investment climate of the past century in the U.S. has attracted foreigners as well.  While the U.S. stock market is at the expensive end of the global valuation spectrum, foreign investors still move money to the U.S. at the first sign of international trouble.
Despite all of these advantages, we should all be aware of the circumstances and assumptions underpinning the huge army of American financial advisors preaching the buy and forget gospel.  The United States of America truly is a special place, and we do live in a special time.  Nonetheless, history is written by the victors.  The losers would certainly have a different view of buy and forget, and a far different asset allocation as a result.
Share on Facebook Share
Share on TwitterTweet
Share on LinkedIn Share
Send email Mail
Print Print