Today might be the first time since April 16th that the S&P 500 index moves more than 1% (it rose 1.05% on that day).  That is one of the longest streaks of the past few decades, and a testament to just how low daily volatility has been in the U.S. market.

Even if the market closes near where the futures are right now (down around 0.9%), the SPX index will still be up nearly 6% year-to-date, an impressive performance considering that European stocks have sold off quite a bit over the past month (the Euro Stoxx 50 index is now only up 1.25% year-to-date).  Dan discussed the weak price action in European banks in yesterday’s morning note, and the European banking system likely remains the biggest systemic risk in financial markets today.

But none of this is news to market participants.  What would be new is volatility in financial markets.  We have discussed on numerous occasions the stark contrast between the low VIX period of 2013 and 2014 and the oft-cited low VIX period of 2004 to 2006, including in a CotD post on June 6th:

We’ve noted this difference before, where volatility on a longer-term time frame is higher in the current market than the low level of daily volatility indicated by the VIX and daily realized volatility in the SPX index.

The reason why we keep pointing this out is that the natural implication is that if weekly and monthly volatility is much higher in the current period (and almost practically all to the upside since mid-2011), then at some point, when we do finally see some downside volatility, it is also likely to be fast and furious.  In other words, the rapid nature of the rally of this bull market rivals the 5 year move from 1996 to 2000.  From Jan 1, 1996 to the peak in March 2000, the S&P 500 index rallied from 616 to 1553.  From the low of 666 in March 2009 to the May 2013 local high of 1687, the S&P 500 index actually had a larger rally (and it has continued over the past year as well).

However, the late 90’s rally was characterized by a VIX that was usually above 20, while the current rally has been characterized by a VIX that has usually been below 20. So the long-term volatility has been the same, but the daily volatility has been dramatically different.  That simple fact is to me a sign that any future correction is likely to be quite sharp and severe, and see another VIX snap higher similar to the only major corrections of this bull market – the 2010 flash crash and the 2011 summer swoon.

Finally, I want to point out that the incredible consistency with which traders have been able to profit from short volatility / long carry trades over the past 2 years has likely sown the seeds of a nasty spike in volatility at some point in the next 6 months.  For example, Macro Man pointed out the incredibly high Sharpe Ratio of high yield credit in a post last week:

It’s nice of the Fed to concede that they observe ‘frothiness’ in leveraged loans and farmland.  Unfortunately, it seems as if the Fed staffers charged with surveying the rest of the financial markets are actually the “see no evil/hear no evil” monkeys.  Did you know that the one year Sharpe ratio of the Iboxx US$ high yield index is roughly 8?  As the chart below illustrates, the rolling 1 year Sharpe of the HY index has approached that level 3 previous times since the crisis (never having been anywhere close to it before the crisis, mind you.)  On each occasion, the risk adjusted return moved swiftly lower.  Caveat emptor. 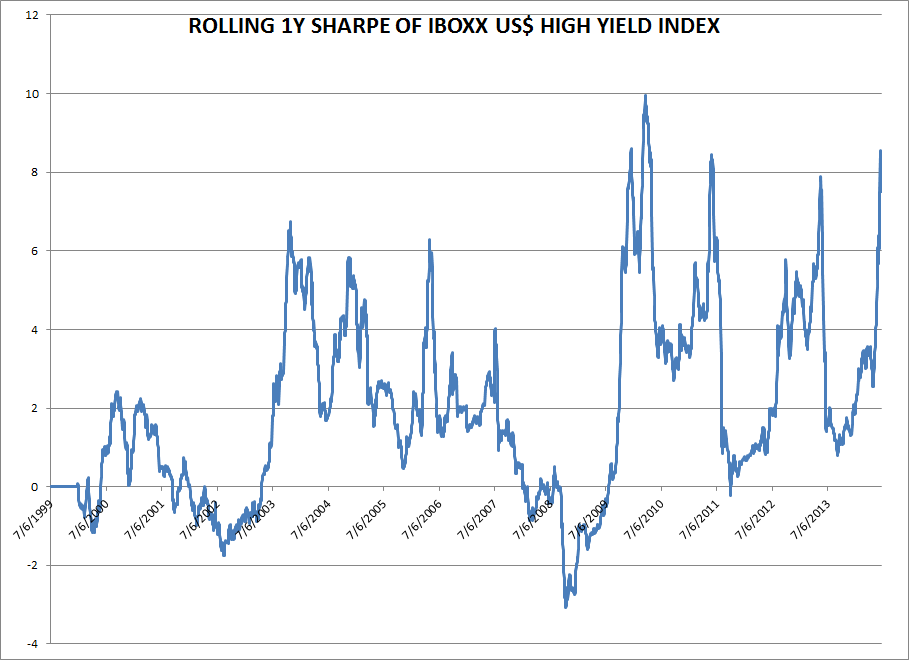 In a similar vein, the incredibly clean downtrend in VXX has likely led to an unhealthy complacency among VXX shorts (even though the math is usually in that trade’s favor). Here’s Dynamic Hedge with his thoughts on Monday (my take:  I agree with him):

We put $VXX through our regular screens to see if anything interesting popped up. Nothing. So we started getting into some more extreme and esoteric scenarios. Still nothing. We put it through just about every screen we could think of — literally torturing the data to tease a result — and nothing came back.

Our conclusion: You could waterboard $VXX time series data and still not generate a compelling technical reason to be long.

When a trade is so conclusive, crowded, and consensus in one direction, it becomes VERY interesting. Afterall, what does the market like to do to most of the people most of the time? Given how “inevitable” the $VXXmarch to zero has become, I would not be at all surprised to see it do the opposite. Any rally will be likely be short-lived and explosive, but there may be some extra yardage given how crowded the short side of the volatility trade is.

Timing is always the elephant in the room when it comes to a long volatility trade.  We currently have a long VIX structure through options designed to give us better odds than simply buying VIX calls (or heaven forbid, VXX).  But add it all up, and the current market setup is giving many hints that it’s going to offer a nasty surprise to the many traders comfortably short volatility.