Biotechs have been a leader throughout the 2009-2014 bull market.  The weekly chart of IBB, the biotech ETF, illustrates the incredible run over the past 5 years:

The ETF more than quadrupled from early 2009 to early 2014, quite a run for the sector as a whole.  It has hardly traded below its 50 week moving average the entire time.  However, what catches my eye most about this chart is the incredibly large volume that traded in the spring of this year, especially notable since the total notional traded was significantly higher for the biotech stocks given the higher level of prices overall.

Though the IBB ETF became more popular, which is one reason for the volume shift on the above chart, the increased notional traded holds true for the single stocks that make up the ETF as well.  In short, a lot more money in the sector changed hands in the spring than at any point in the past 5 years.

These are the top stocks that comprise IBB:

The remaining names on the list are more speculative, though with higher expected growth prospects for the most part if everything goes well.  Of course, “expected earnings growth” can rapidly change, especially for biotech stocks.  Therein lies the risk for the sector in the short term, as shown by the sentiment change in March and April, when there was no major fundamental reason for the biotech swoon.

Erik Swarts detailed the possible psychology surrounding the advance in the biotechs in  a Monday post:

Since breaking down sharply at the end of Q1, we have viewed and contrasted the higher beta biotechnology sector as prospectively pivoting lower from a cycle high of the secular variety. Back at the end of April we had introduced the concept below which depicts overlapping asset cycles that have boomed and bust with strong duration, performance and seasonal tendencies (see Here).
If past is appropriately prologue here, we anticipate that similar to the historic tops witnessed in the Nikkei, Nasdaq and silver – the current move in biotech is working towards completing its retracement obligations – and should resolve lower through the balance of the year. 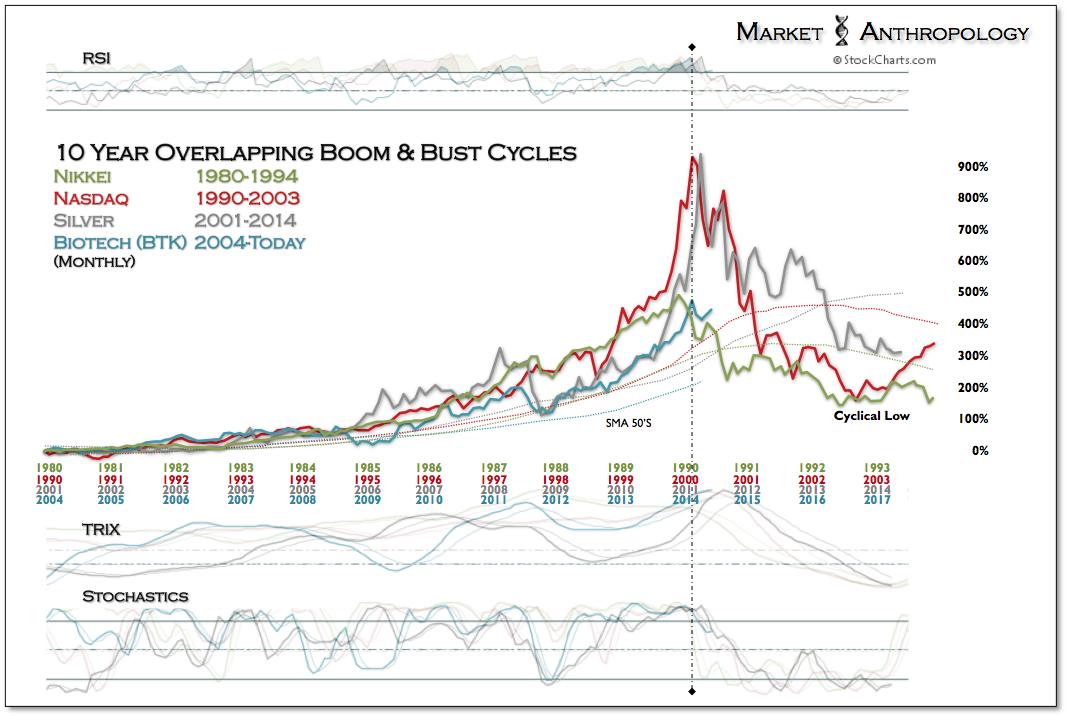 Erik does end the post with a caveat that a break above $255 in IBB would likely negate the topping scenario, and I tend to agree.  However, that means that a potential bearish trade here offers an obvious stop loss point (break above $255), while renewed selling in IBB could mean a move back down to at least retest the $220 support level over the next couple months:
[caption id="attachment_41635" align="alignnone" width="600"]

IBB daily chart, 50 day ma in pink, 200 day ma in yellow, Courtesy of Bloomberg[/caption]
Meanwhile, implied volatility has fallen substantially over the past month, to near 6 month lows as the sector has rallied:
[caption id="attachment_41636" align="alignnone" width="600"]

We don’t necessarily think a vol spike is imminent, but we’d rather go with a long premium structure to play for a move lower given the overall levels of options premiums.

Add it all up, and I pulled the trigger on the following trade:

Rationale:  We will keep a tight stop on this position – in other words, we’re out if IBB breaks $255 to the upside.  Otherwise, we plan to hang on to it unless IBB nears the $230 midpoint in the coming weeks.

***NOTE***  Options Markets in IBB are WIDE, so we were patient with our entry on this one.