In a shift compared to most of 2014, overnight price action was characterized by a rally in China, specifically the Shanghai Composite, up almost 3%.  The Hang Seng was up more than 1%, while Japan actually closed down 1.6%, and is one of the worst performing markets in the world in 2014.

The real question for Chinese related assets is how much bad news is priced in.  Cam Hui had an interesting post on Monday, detailing what he called the Old China trade vs. the New China trade:

A pair trade with reduced market risk
Though I am somewhat skeptical of any company in the financial sector because of looming credit, this investment thesis brings up an idea of a pairs trade. How about buying “New China” (consumer sectors) and shorting “Old China” (finance and infrastructure)?

On the long side, one ETF to consider is PowerShares Golden Dragon Halter USX China Portfolio (PGJ), which is overweight in Technology and virtually nothing Financials: 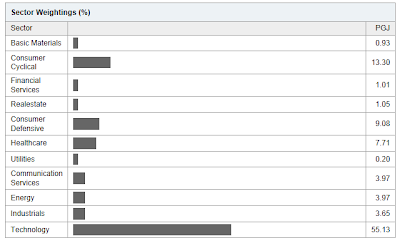 By contrast, iShrares FTSE China 25 (FXI) has a roughly 50% weight in Financials:

The pairs chart tells the story. This pair had been range-bound until PGJ staged a relative breakout against FXI last summer and it has been on a tear ever since. While it is somewhat extended, this is one way to benefit from the stated government objective of rebalancing growth from credit driven infrastructure growth to consumer-led growth.

The pairs trade chart shows a high degree of volatility and it is obviously not without risk. However, it may be an interesting way of being exposed to China;s growth with reduced market risk.

Perhaps this is why global financial markets have been relatively sanguine about the weak economic data and price action in China.  The importance of “Old China” is being replaced by “New China” with the economic growth baton being passed accordingly.

The risk to this view is that the credit crunch in finance and infrastructure affects future consumption demand.  The extent of that overhang will likely determine whether the fall in asset values in China is contained to a couple bloated sectors, or impacts the broader economy and global asset prices overall.