When the Internet bubble popped in the spring and summer of 2000, it was marked by fewer and fewer stocks making new highs, with a small group of “horsemen” doing a lot of the late stage heavy lifting.  The rally was getting narrower on what felt like a daily basis, as mini-bubbles in specific sectors had been bursting, leaving only a few mega-stocks to carry the torch.

Is it different this time? Well, from a profitably and valuation standpoint, I would suggest that it is very different among the mega-cap leaders, though perhaps not so different under the hood.  Looking at the QQQ, the etf that tracks the Nasdaq 100, it is easy to see the concentration of the largest holdings.  The top 5 stocks of the index make up about 34% of its weight, and have a combined market cap of about $1.55 trillion!!  While the top 10 holdings make up about 50% of the index and probably more than 80% of all of its components’ market cap.

As go the big dogs, so goes the market.  Looking at the top 5 holdings, I think it is safe to say that AAPL and MSFT are considered to be quite defensive, while AMZN and FB, expensive and more speculative.  GOOG is the real outlier.  On a trailing PE basis, it could be viewed as expensive at 33x, but on a forward basis it has P/EG of about one in the out year, which for a company this size is fairly impressive.  The issue of using PE/G ratios is that the G is on the come.  Meaning if the growth does not materialize as analysts expect it to, the stock will quickly be re-rated lower.  So as regular readers know, GOOG is the one that makes us a tad nervous from here on out due to what appears to be a universal confidence among investors that this is the One.

Back to the index – technically (see 6 month chart below) the recent consolidation looks quite healthy in and around $90, above the prior highs, but the index is now 10% above its 200 day moving average, a momentum indicator it has not been below since Jan 2nd, 2013, the longest stretch in more than 10 years.

The index has not had a sell off of greater than 7.5% in that period, with the January to February peak to trough decline of only 6%.  The sell offs have been shallow.  The concentration among the top holdings has something to do with that, since they have shown very good relative strength due to their “safe haven” perception.

While the mega caps that dominate QQQ do not look egregiously valued, many of the small cap troops do show signs of froth not seen since the year 2000.  Trader David Doran had a good illustration of that on Twitter this weekend:

Momentum gotten out of hand? I created a simply filter, companies in the Russell with a market cap 5+ billion and price to sales above 10

Only 4 quarters in the last 20 years had more stocks fit that criteria than right now. The entire year of 2000. pic.twitter.com/rFYszxgY3M 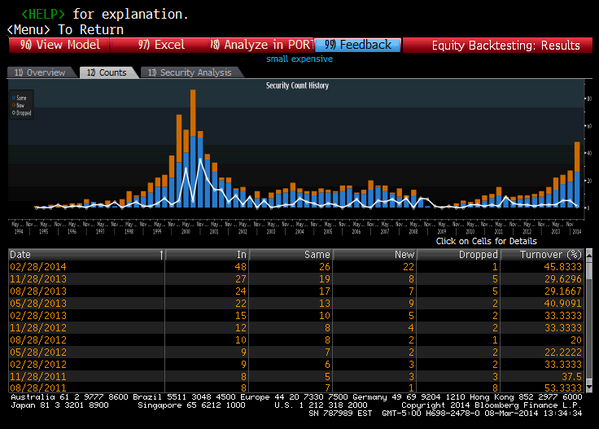 Another indication that many of the small cap stocks are in bubble territory is that the median measures of valuation are near all-time highs, even as the mean measures of valuation don’t look so frothy (once again, the mega caps are not too expensive, but many stocks in the market are very expensive vs. history).  Here’s a chart from Goldman research illustrating that:

The broader optimism in the market has led to the usual symptoms of a bubbly market – major M&A on dubious grounds (FB buying WhatsApp), large IPO issuance, and huge moves in little known sectors (marijuana, fuel cells, and small cap biotech for example).

Add it all up and the mega caps don’t seem too bubbly, but a large part of the stock market in the weeds looks quite frothy.  Of course, it has not mattered for more than a year, and the steady trend in QQQ is a good indication of that.  But even QQQ is not the measure of tech optimism that it once was – they’ll have to come up with a social/renewable energy/biotech ETF combination for that one.

Implied vol is very cheap in the QQQ, as the etf has consolidated over the last couple weeks, realized vol has come in very hard, now converging with implied vol.  This could be a good spot to be long volatility for those who think we could be close to a break and Q1 reporting season could be the spark. The one year chart below of 30 day at the money realized vol (white) vs 30 day at the money implied vols shows that for those looking to pick a direction, doing so with defined risk could be the way to go IF stocks are about to move around again:

We have plenty of short exposure on at the time, but if we didn’t we would be would be inclined to look out a couple months and make a bet that the broad market would sell off at least a few % at some point during that time period.

Rationale: If you are willing to pick a direction and a time period at the money options are cheap in the QQQ.  Risking 2.5% of the underlying etf price to make a bearish bet on a very concentrated index like the QQQ seems fairly cheap. If the index were to sell-off soon this put would benefit not only from deltas but also a pick up in implied volatility. At that point it could be spread at a much better entry price on the short put leg.