First off, let me just be clear that I’m one of the few who don’t think this selloff has much to do with EM.  Hard to believe that it was only 10 days ago that the whole world was freaking out about what was going on in Turkey.  Here’s what I said last week:

Jokes aside, however, traders around the world, as they’re so prone to do, are placing far too much importance on what’s going on in Turkey as “THE REASON” for markets moving lower. The catalyst for a selloff is rarely the reason for the selloff.  In fact, as I’ve noted in many Macro Wraps before, the “reason” is often ascribed to the selloff after it’s already taken place.  Even when we’re in the midst, traders scramble for headlines to explain stocks moving lower.  That’s natural in the very uncertain world of financial markets, and humans hard wired to EXPLAIN events.

Following up on that view, the traders at Macro Man blog had a quick post today detailing the same sentiment:

It’s all EM is it? Taking the two favourite stress indicators of ZAR and TRY as barometers of EM deficit country woes we can see how they linked to the fall in S+P500 futures. But once their job was done in tipping over DM equities they have delinked. Here we have a cluttered chart of the last 20 days in S+P500 futures, ZAR/USD and TRY/USD. 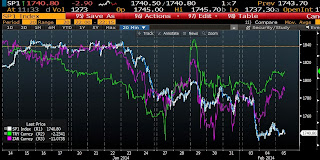 And a clearer one with just the ZAR showing

If you think it’s all EM there is an obvious trade there for you. But perhaps this isn’t all EM and once again a correlation makes a nice story while it fits, until it doesn’t, at which point you need to go and find a new one.

In fact, EEM is almost flat on the week, while SPY is down more than 1.5%. For the year, SPY is still handily outperforming EEM, but I wanted to look at the chart of the SPY/EEM ratio to get a sense for when the SPY over EEM trade might start to look iffy.  U.S. stocks have been big winners for several years now (since mid-2011), as the 10 year chart of the ratio shows:

The 4.50 level shown in red was broken to start 2014.  That’s a key level of support going forward for the ratio.  The 200 day ma for this ratio is still cleanly rising, now around 4.20, about 10% away.  If 4.50 breaks on the ratio though, then all of a sudden, the SPY over EEM trade that has been so easy for several years might not look so easy.