Chinese internet stocks have been ablaze in 2013.  They really found their stride this summer, though signs of strength were evident in the spring.  We covered the sector in our Macro Wrap in mid-June, with the following conclusion:

The Chinese government is finally serious about shifting the economy more towards consumption and away from fixed investment.  From a bird’s-eye view, that’s a painful transition.  The large banks, construction companies, industrials, and commodity companies will get hurt.  Individual property investors, who own apartments in empty cities, will get hurt.  International producers catering to Chinese demand will get hurt.

However, there will be winners as well.  The Chinese internet sector will be one of the largest single sources of consumption demand in the world over the next decade.  Relative to developed markets, it is still in its infancy.  The stocks are signaling that investors are willing to provide the sector with capital, despite China’s systemic troubles.

I expect more weakness in Chinese markets in the months ahead.  The imbalances are too large.  Don’t throw the baby out with the bath water, though.  Chinese internet stocks are the oasis in the desert.

Fast forward to today, and stocks like QIHU, BIDU and SINA have had massive runs, while the Shanghai Composite is essentially flat since mid-June.  But in the past week, some short-term cracks have appeared in the Chinese internet momentum story.  First, NQ has fallen about 60% since Muddy Waters issued a research report on Thursday that indicated fraud at the company.  The mere fact that the stock has continued lower since the initial selloff shows that the market views the Muddy Waters report as more likely true than not.

Another potentially fraudulent Chinese company has investors once again re-evaluating all Chinese stocks. Yesterday, the Chinese internet stocks took another hit, after SOHU reported worse than expected guidance for Q4.  SOHU management indicated higher than expected R&D and marketing for its games division over the next few quarters, which is going to hurt margins over the next year.

SOHU’s stock had an ugly close yesterday, ending the day on the lows, down more than 16% on its largest volume session of 2013.  More importantly, it could not hang on to important support around $70:

That’s an ugly breakdown after months of consolidation and then a clean breakout above $70 in mid-September.  On a longer-term chart, you can see that SOHU has done nothing over the past 5 years:

Despite the apparent slowing momentum on exports, China’s response to the 2008 global financial crisis was to spend, spend and spend on infrastructure and the growth was debt financed.  If you think that the Fed primed the pump in the aftermath of the financial crisis of 2008, consider what the PBoC did (as per Alan Ruskin of Deutsche via Business Insider): 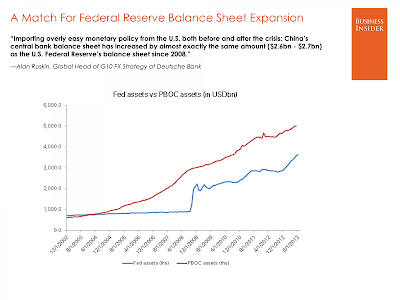 He goes on to discuss the decreasing impact of each new dollar of debt-fueled spending in China, and the long-term impact of such imbalances.
Fortunately for Chinese internet companies, online spending will garner an increasing share of consumers’ wallets.  According to the WSJ, online retail sales are expected to hit $545 billion in 2015, compared to $345 billion the U.S.  These stocks will likely continue to be the oasis in the Chinese investing desert in the coming years.  As we’ve seen in the past week though, it will likely be a rocky ride, with the spoils only going to a few big winners.
Share on Facebook Share
Share on TwitterTweet
Share on LinkedIn Share
Send email Mail
Print Print