In the past month, we have seen major improvements in the macroeconomic data across the globe.  Last week’s U.S. data ended on a bit of a weak note with the payrolls report, but the ISM Manufacturing and Non-Manufacturing numbers were blowout releases.  European PMI data is near 2 year highs for a number of countries, and even China has shown signs of stabilization after a weak spring/summer.

The last time both the Manufacturing and the Non-Manufacturing PMI were above 55 in the same month was back in March 2011:

The macro data is clearly better than it was earlier this year.  But as with all things related to financial markets, what to do with that information is very murky.  March 2011 was not a great time to buy stocks in the short-to-intermediate term, as the S&P 500 was 15% lower 6 months later.  More importantly, the real issue at present is whether the incremental buyer will be more aggressive than the incremental seller heading into the last 15 weeks of 2013.

Ukarlewitz posted one of the better long-term U.S. market perspectives on his Fat Pitch blog this weekend, asking the pertinent question right at the start:

It is, in other words, the right time to ask what, if anything, will drive the indices higher before they instead head lower. 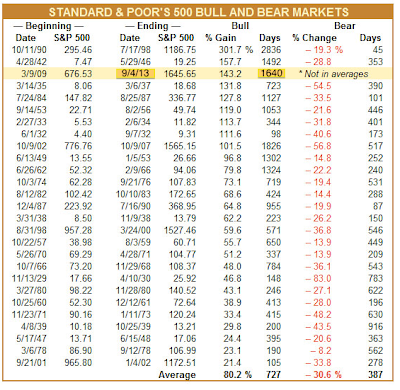 He goes on to layout the main drivers of stock returns over time:

To simplify, think of the market as being driven by three primary variables: sales, margins and valuation multiples. For the market to go higher, some combination of higher revenue growth, higher profit margins or higher multiples will be needed.

We will look at each in turn below, but here are the main conclusions:

As he notes, increases in sales and margins were the drivers of the rally from 2009 to 2011, and valuation multiples have been the driver of the rally since 2013.  With such multiple expansion, to what extent are better fundamentals already priced into the market?

At this juncture, the psychology of market participants, and their overall positioning, likely matters more than the macroeconomic ebbs and flows in the data.  U.S. stocks have shown impressive resilience in the face of emerging market swoons, Syrian rumblings, and the big Federal Reserve release next week.  With psychology at the forefront, there are two key price levels we’re watching this week:

Both hold special importance as traders both long and short contemplate their next move.