Building debt overhangs across the world have been the story for the past decade.  Whether it’s households, banks, or governments, whether it’s the U.S., Europe, or China, an increasing debt stock has been both the cause and result of crises.  Over the past 10 years, global GDP growth has averaged 3-4%, while debt loads have grown by an average of 10-12%.  Today, there’s more than $200 trillion of total debt obligations worldwide.  Of course, someone’s liability is someone’s asset, but debt is a dangerous dance-mate.  It exacerbates both positive and negative outcomes.  And it accelerates the existing trend.

That’s why interest rates hold the key.  One of the most bullish developments for U.S. household spending over the last few years is the drop in debt interest payments as a percent of disposable income to near 30 year lows.

Courtesy of the Calafia Beach Pundit blog, the chart shows the U.S. Households’ Financial Burdens as a % of Disposable Income:

Despite the fact that the total debt load for households is much higher than it’s been for most of the past 30 years, actual interest payments on that debt are at the low end, thanks to record low interest rates.

The clever crew at the Macro Man blog focused on the impact of lower mortgage rates in their recent post.  Stellar insight, so I’m including a larger than normal excerpt so you can follow their entire line of reasoning:

The impact on apparent housing affordability has been no less dramatic. The median US household income as of 2011 was ~$50,000, a level which has been broadly stable for the past 5 years. At the end of 2010, with mortgage rates at 5%, the average US household was able to afford a $301,000 house based on debt to income limitations on conventional mortgages. At the end of 2012, with mortgage rates at 3.5% and with income unchanged, the average family is able to afford a $360,000 house, a 20% increase. In other words, the decrease in mortgage rates has increased the maximum allowable home price to income ratio from 6.0 to 7.2. What’s not to like? 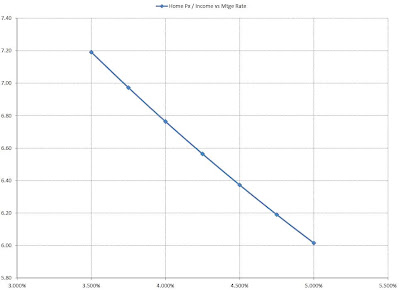 This, of course, is all part of the central bank master plan. By lowering real interest rates, the private sector will take on more debt, spend more, and prosperity can reign. Indeed this seems to be happening and with declining debt payments, US households appear to be re-levering and after a sharp drop, US house prices have started to tick up again relative to incomes: 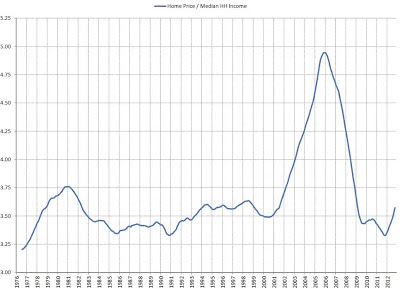 But wait, there is more good news. Given that rates for new mortgages are still more than 25% below the average for existing mortgages, there is still a substantial easing in store. A continuation of recent trends would result in a further 50bp decline in existing mortgage rates over the next 2 years, (about 10% cheaper). 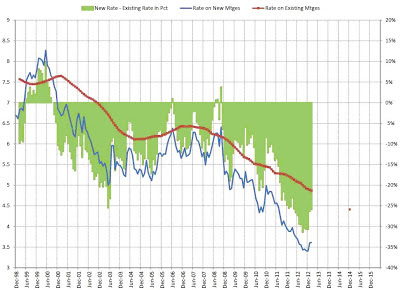 Now you may ask why TMM is concerned with all this good news (not that we don’t like good news). The answer is embedded in the chart above. Note that the US has never survived an instance in the last 14 years where new mortgage rates exceed existing mortgage rates without the economy tipping into a recession. And that makes sense. Without increases in real income, mortgage rates which are no longer supportive to house prices ultimately result in declining expenditures. In other words, and this is the worrying implication, without income growth there is an interest rate at which the US will tip into a recession. And that rate is declining, even as the private sector re-leverages. In 2 year’s time, that rate will probably be ~4.5% for fixed rate mortgages. If mortgage to treasury spreads stay constant at ~150bps, that would imply a 3% recessionary ceiling for 10y treasury yields.

The bold highlight at the end is THE kicker.  It’s why interest rates are so key.  Since the debt stock is still large relative to history, monthly financial obligations are even more tied to interest rate movements going forward.

The Federal Reserve is well aware of this new paradigm.  It’s why they are so wary of raising rates anytime soon.  They want consumers to enjoy the current low rate party.  But even if rates don’t go higher, the incremental juice from Fed actions is naturally declining as debt contracts keep re-setting lower.  In short, we’re all hoping that the American economy can make the transition to juice-free life better than American sports…