Cam Hui, the blogger at the HumbleStudentoftheMarkets blog, had a great post this morning detailing some of the cracks beginning to show in the corporate credit market in the U.S.  Here is the concluding paragraph:

Trouble ahead for the risk trade?
The Business Insider article I mentioned also cited the linkages between the credit market and the stock market:

The chart below, via BofA Merrill Lynch, shows the size of the rally in credit – and how it has mostly tracked that in other risky assets like the S+P 500 that began in November.

The big spread tightening in the credit space that occurred when a deal was reached on the “fiscal cliff” is what caused so many Wall Street strategists to blow through their year-end targets only a few days into January. 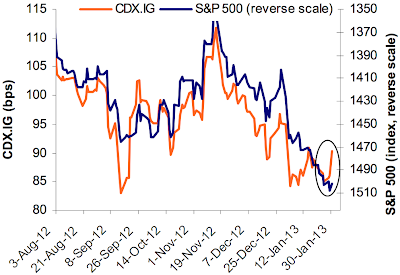 However, that uptick circled in the chart above – a significant sell-off in corporate debt at the end of the month – has people talking.

Should we see a selloff in the increasingly fragile credit market, it could turn into a rout whose contagion could spread into other risky assets like stocks. I have no idea what the trigger might be, but stock bulls should be aware of this risk.

Now, when the U.S. stock market has such strong upward momentum like it does now, it usually takes more than a few warning signs to turn it around.  Warning signs in the currency and credit markets, in addition to weakness in global equity markets, have been building in the past couple weeks, but the U.S. market has remained resilient.  Momentum is a helluva phenomenon.  It has driven prices higher than I expected.  And it can continue.  But buying into the market up here is the muppet trade.