U.S. stock index futures were little changed on Tuesday as a pessimistic outlook from multinational manufacturer Caterpillar (CAT.N) was offset by hopes the boost from central banks’ stimulus will sustain economic growth and markets…

…Just minutes before markets closed on Monday, Caterpillar Inc cut its 2015 profit outlook, warning that weaker commodity prices would result in a bigger-than-expected decline in demand, sending shares down 1.4 percent to $89.60 in premarket trading.

… Paychex Inc (PAYX.O) reported a first-quarter profit that narrowly beat estimates, helped by higher revenue from its human resource services business. The stock fell 5.3 percent to $32.55 before the bell.

Red Hat Inc (RHT.N) reported a lower-than-expected adjusted profit as costs rose, and lowered the top end of its full-year revenue outlook on slow growth in its services business.

Single-family home prices rose for a sixth month in a row in July, though the improvement was not as strong as expected, a closely watched survey showed on Tuesday.

The S&P/Case Shiller composite index of 20 metropolitan areas gained 0.4 percent in July on a seasonally adjusted basis, shy of economists’ forecasts for 0.9 percent, according to a Reuters poll.

Spain’s borrowing costs rose Tuesday at an auction of short-term debt, signaling investors’ uncertainty over the country’s strategy for emerging from crisis.

The Spanish Treasury sold almost 4 billion euros, or $5.2 billion, the maximum amount targeted. The three-month bills drew yields of 1.203 percent, up sharply from the 0.946 percent it paid to move similar paper in late August. The yield on six-month debt rose to 2.213 percent from 2.026 percent at the previous auction.

Rates on high-yield corporate bonds are near record lows. The rate on high-yield, or junk, bonds was 5.42 percentage points above comparable Treasurys last week, down from 9.1 points in October 2011. Corporate borrowing rates have fallen as the Federal Reserve’s plan to buy more mortgage-backed securities has steered investors seeking higher yields into other fixed-income assets. 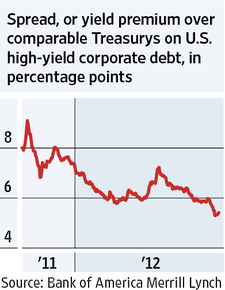 Shares of transportation companies have hit the skids, flashing what some see as a warning signal for the stock market.

Some investors subscribe to “Dow Theory,” which posits that share prices of airlines, railroads and trucking companies offer a glimpse of future movement in stocks across a range of industries. According to the theory, which dates back to the early 20th century, demand for goods should be reflected in the amount of cargo carried by oceangoing vessels and deliveries made to consumers’ doorstops, as well as manufacturers’ level of output.

Office-supply giant Staples is plotting a restructuring that will see it close more stores in the U.S. and Europe, sell its European printing business and combine lines of business in an attempt to improve its online offerings.

But all of that does not appear to include plans for an imminent sale, reports of which sent shares jumping earlier this month.

Corporate restructuring can sometimes set up a sale, but the company’s announcement gives no hints of selling more than the European Printing Systems business, and the company doesn’t say anything about bankers being hired.

Instead, the plan calls for a focus on online while improving the “productivity” of stores. The company named one executive, Demos Parneros, as head of both U.S. retail and Staples.com. It said it would invest in its online operations to expand its offerings online, funding that by cutting $250 million a year in costs by the end of 2015.

The costs will come from closing 30 stores and cutting the size of 30 more in the U.S. during this fiscal year, as well as closing 45 stores in Europe. Total U.S. store square footage is being cut by 15%.

The company said it would continue buying back stock.

The troika will also state that Greece will not meet the long-term goals of funding the budget without external help from 2015 and a complete return to financial markets in 2020. Suddeutsche says the EU does not want Greece to fail, but it does not want to pay the €30bn either. There was thus a danger that they would shift the responsibility to the ECB.